Africans consider the baobab tree a miracle of nature. Botanically, the baobab tree is from the genus Adansonia, which contains eight species of trees (six native to Madagascar, one native to mainland Africa, and one native to Australia). The trees vary in size but some are enormous. The largest known specimen is found in South Africa. It has a circumference of 47 meters (150 ft) and an average diameter of 15 meters (49 ft). Some species grow as tall as 30 meters (100 ft). The trees also live for a long time. One source claims, “Many still standing today have certainly been around since the birth of Christ; others for far longer.” The exact age of baobab trees is difficult to determine because the tree does not produce annual growth rings. The wood itself is too fibrous for structural use but the bark is shredded into strands of fiber for use as rope, baskets, nets, snares and cloth. The baobab is often called the “upside down tree” because its branches look similar to a root system and normally sit atop the truck. As the attached pictures show, however, baobab trees can take many forms and shapes. So why would a corporate blog that deals with development, resilience, connectivity, and innovation concern itself with a tree? The answer is that the world is just discovering the tree and it may become a valuable natural resource for some African countries. 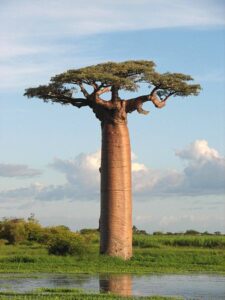 The baobab is considered miraculous because it has so many uses [“What Will Happen When the Baobab Goes Global?” by Dawn Starin, New York Times, 25 May 2009]. Starin writes:

“In Africa, the baobab tree is steeped in mystique and surrounded by superstition. Many people believe that its spirit protects the community around it, and its tangible properties certainly nourish those who live near it. Parts of the tree are used to make rope and fishing line; to feed goats, sheep and cows; and to provide shelter, food and medicine.”

Baobabs can survive in harsh climates because they store water inside their swollen trunks (in amounts up to 120,000 liters (32,000 U.S. gallons)). The leaves are commonly consumed as a leaf vegetable throughout mainland African. The fruit is also extremely nutritious. The nutritional and medicinal characteristics of the baobab are attracting the attention of agricultural and pharmaceutical corporations. Starin asserts that these characteristics could make the baobab tree the next “super food.” She continues:

Starin wonders, however, whether the baobab will prove to be a blessing or curse for the countries that grow it.

“The baobab has never been a plantation tree; it grows wild in arid regions. … Presently people harvest only what they need and maybe a bit more to sell at local markets. If it becomes an international commodity, the baobab probably would need to be planted as a crop, even though arable soil is limited. The open land where local people now freely harvest wild baobab could be developed by agribusinesses into plantations, or else precious forests or farmland used to grow everyday staple crops could be turned over to the baobab export industry. Although local people would probably find jobs on such farms, their ability to harvest or purchase the baobab themselves would be limited. They wouldn’t be able to pay as much as London dealers could. This means that some Africans could lose a source of household wealth, an important part of their diet and an essential pharmaceutical resource. These possibilities — not to mention the threat of corruption, poor wages and genetic modification leading to a loss of the tree’s biodiversity — are not random predictions. “

Starin is not necessarily against progress. She understands that people scrabbling out a living can and must do better, but she believes that development should take into account local concerns and customs. I share some of her concerns. As I’ve noted before, corruption undermines almost any development program. That’s why anti-corruption efforts are part of the Enterra Solutions® Development-in-a-Box™ framework for helping countries pursue sustainable development. Starin continues:

“Africa is no stranger to the overexploitation of its natural resources. But the solution isn’t necessarily to cut the baobab off from international markets. Regulations could be put in place to protect the tree, its environment and the people who depend on it — and still allow for profitable production. The coffee trade provides a model. It’s clear that many consumers are willing to pay more for fairly traded coffee — which costs enough to provide the growers a decent wage for their labor. This bottom-up pricing should be applied to the baobab market, even if it means European health nuts have to pay a lot for their smoothies. The baobab’s new popularity is exciting, but the European Union, the United States and African exporters should decide on regulations before the baobab is rushed to European and North American markets.”

I support the kind of holistic approach recommended by Starin. The baobab tree is a unique resource that could provide countries that can profitably grow it a good basis for diversifying their economies — at a minimum a profitable baobab industry could affect the agricultural, health care, and transportation sectors. For centuries, the baobab tree has played an important role in the economy and culture of Africa and it could play an even more important role in the future.