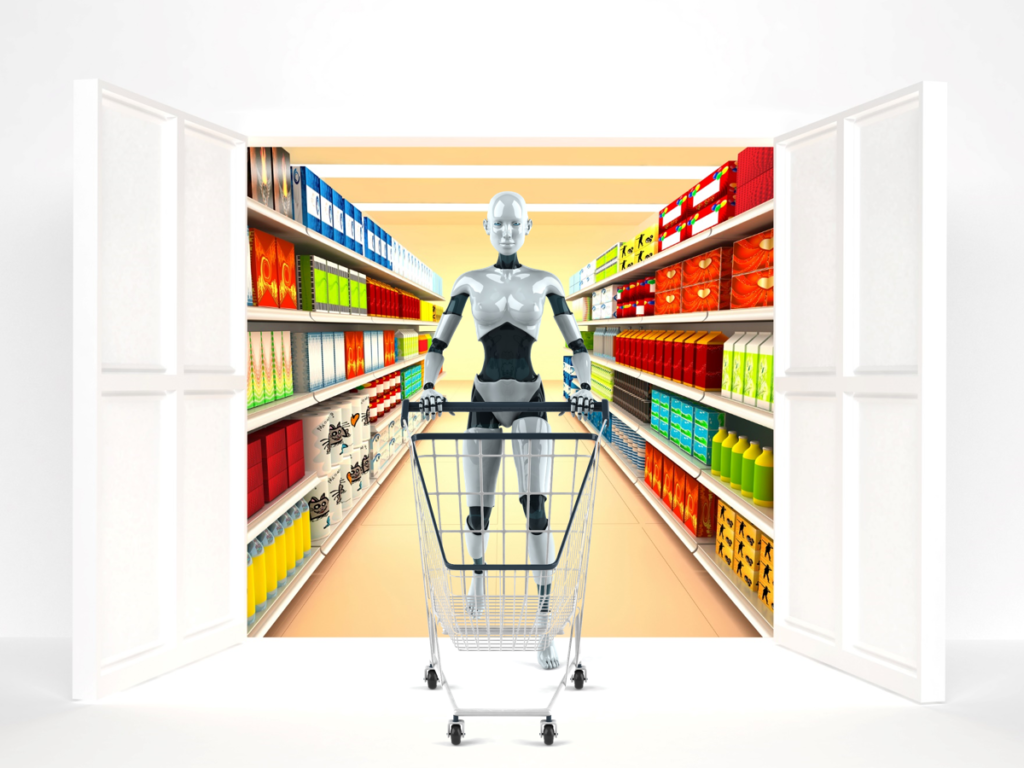 One fixture in almost all movies about the old west was the general store — the predecessor to the modern grocery store. Inside those one-stop shopping enterprises you would find plain-dressed women and hardscrabble men telling sales clerks what items they wanted to purchase. The clerks would dutifully handpick those items from off the shelves, while other customers patiently waited to be served. A hundred years ago, that business model changed when Clarence Saunders opened the first Piggly Wiggly store in Memphis, TN. Jerry Cianciolo explains Saunders believed “shoppers would gladly hand-select their own merchandise, and pay upfront, in exchange for lower prices and faster shopping.”[1] Saunders understood people don’t like standing in line to be served or to check out. A hundred years later, that remains true. “It’s no secret,” writes Keith Loria, “that one of people’s least favorite parts of the grocery shopping experience is waiting in long checkout lines. And despite advancements in automated technology to make the checkout experience faster and easier, it’s still often cited as the No. 1 reason people dread going to a store.”[2]

Amazon’s solution to the dreaded checkout line is no line at all. Loria explains the company, in late 2015, created a unique store called Amazon Go that it piloted in a downtown Seattle. The grocery store let customers walk in, grab items from the shelves and walk out without ever having to wait in a checkout line. The technology allowing this new concept in grocery shopping included computer vision, sensor fusion, and deep learning. The store was beta tested by Amazon employees and was supposed to open to the public in the spring of 2016. Unfortunately, Amazon discovered “kinks in the technology to automatically charge customers when they leave, instead of using cash registers, checkouts and lines.”[3] As a result of these kinks, Karen Hao (@_KarenHao) notes news about Amazon Go disappeared until the company started hiring store-related personnel in November 2017.[4]

While Amazon was trying to solve problems associated with its automated grocery store, across the Pacific Amazon’s rival JD.com was moving ahead with its own version of an automated store. Hao reports, “JD announced that, in partnership with Hong Kong real estate developer China Overseas Land & Investment Ltd, it plans to open hundreds of unmanned convenience stores with technology reportedly more advanced than Amazon’s. Its trial shops have already been tested by the 10,000 employees at its Beijing headquarters.” According to Hao, JD’s stores will use “RFIDs and cameras with facial recognition and image recognition technology on the store ceilings to track each customer’s movement and product selection. As the store learns from a customer’s preferences over time, it will also begin to show personalized advertisements. The same tracking technology will also help store owners restock inventory more efficiently.”

The move towards automated stores shouldn’t come as too big of a surprise. Boston Consulting Group (BCG) analysts Gavin Parker, Thomas Jensen, and Bill Urda, observe, “These days, far fewer families shop for what they will need next month. Instead, they take shorter, more frequent shopping trips, increasingly to smaller stores nearby that are easier to get in to and out of than the larger-format supermarkets and hyper-markets that, in the 1980s and 1990s, held the high ground on price selection.”[5] What could be more convenient than walking into a store, picking up what you need, and walking out without ever having to stand in a check-out line. In effect, the customer simultaneously becomes both the cashier and the bagger found in traditional grocery stores.

Although the Amazon and JD stores are slated to be in traditional brick-and-mortar buildings, another Chinese startup believes the future may be more mobile. Adele Peters (@adele_peters) reports, “In Shanghai, a prototype of a new 24-hour convenience store has no staff, no registers, and the whole thing is on wheels, designed to eventually drive itself to a warehouse to restock, or to a customer to make a delivery. The startup behind it believes that it’s the model for the grocery store of the future — and because it’s both mobile and far cheaper to build and operate than a typical store, it could also help bring better access to groceries to food deserts and rural areas.”[6] Thanks to e-commerce, there is currently an explosion in warehousing taking place. With so many warehouses available, a mobile, automated store may indeed have a future place in the grocery sector. Peters explains how the Chinese version works:

“A hologram-like AI greets you, and, as you shop, you scan what you want to buy or place it in a smart basket that tracks your purchases. Then you walk out the door; instead of waiting in line, the store automatically charges your card when you leave. The tiny shop will stock fresh food and other daily supplies, and if you want something else you can order it using the store’s artificial intelligence. The packages will be waiting when you return to shop the next time. When autonomous vehicles are allowed on roads, the store could also show up at your home, and the company is also testing a set of drones to make small deliveries.”

What all of these automated grocery stores have in common is a reliance on artificial intelligence technologies. But AI can also be of significant value to traditional supermarkets. Hao reports, “In addition to its fully integrated store concept, JD tested a second shop model that uses low-cost piecemeal technology solutions, such as smart shelving tools, that will allow existing stores to upgrade and increase the efficiency of their operations. … ‘These two smart-store solutions will completely change what it means to go to take a trip to the store,’ said JD vice president Song Ma. ‘From helping small stores’ owners streamline their supply chains and increase stocking efficiency, to speeding up check out, this is a massive jump beyond anything in use today.'” My company, Enterra Solutions®, already offers many AI-powered solutions for grocers. For example, the Enterra Category Management Intelligence System™ (CMIS) provides grocers with better category information leading to better demand forecasts and making all aspects of the supply chain more efficient. The CMIS includes: Trade Promotion Insights & Optimization; Planogram Insights & Optimization; On-shelf Availability & Out-of-Stock (OSA/OOS) Insights; Consumer Migration Analysis; Net Revenue Management Insights & Optimization; Everyday Pricing Analytics & Opportunities; Multichannel Insights & Optimization; and Brand Health Insights.

It’s not yet clear whether automated grocery stores will overtake traditional supermarkets as the preferred shopping venue. What is clear is artificial intelligence is going to play a major role in the grocery sector in the years ahead. Keeping food prices reasonable is essential for a growing economy and for the health and welfare of society in general. AI can help make the grocery sector more efficient while helping grocers remain profitable.