An article in today’s New York Times [“In Congo, Hunger and Disease Erode Democracy,” by Lydia Polgreen], talks about the terrible conditions that continue to plague the Democratic Republic of the Congo. As I read it, I couldn’t help but reflect on the hierarchy of needs introduced by Abraham Maslow some 50 years ago. Like most brilliant ideas that make you slap your forehead and say, “Why didn’t I think of that — it’s so obvious,” Maslow’s hierarchy of needs makes the simple observation that a drowning man is thinking about his next breath and little else. Maslow’s pyramid is normally represented in a pyramid like the image showed below. Starting at the bottom of the pyramid, the layers represent the following needs: 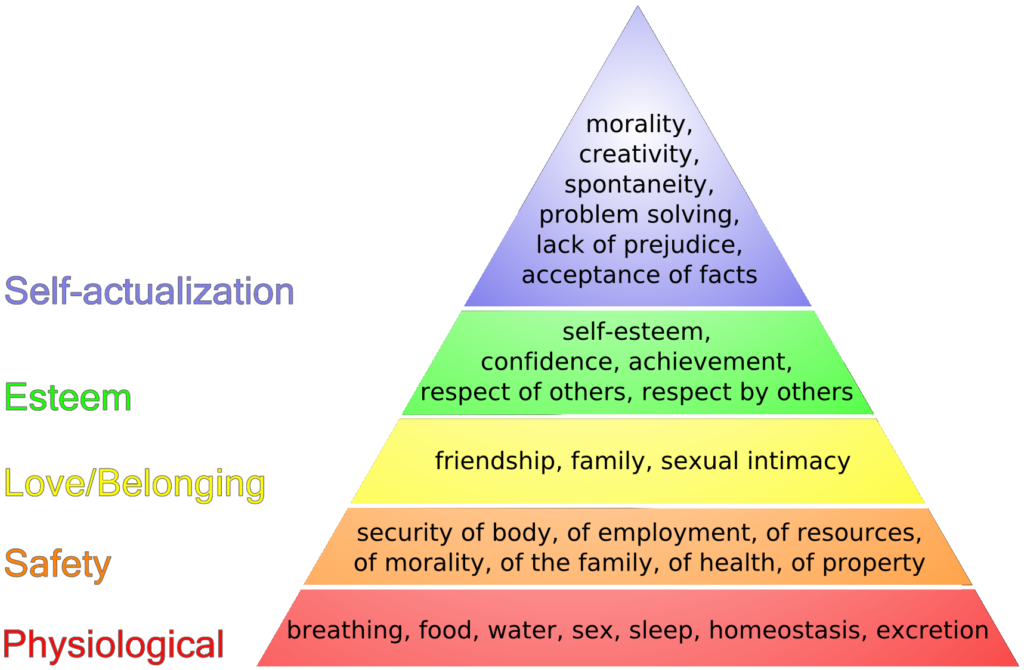 “In less than a decade, an estimated four million people have died, mostly of hunger and disease caused by the fighting. It has been the deadliest conflict since World War II, with more than 1,000 people still dying each day. For many here, survival, not elections, is the milestone.“

Our Development-in-a-Box™ approach applies a flexible framework that takes into consideration Maslow’s hierarchy. Development-in-a-Box is standards-based, which means learning curves are steep, implementation is quicker, and, therefore, people can start moving up the hierarchy of needs at a quickened pace. The world is getting better at delivering food and health assistance, but situations in places like Afghanistan, Iraq, Sudan, and Congo demonstrate that we have a long way to go when it comes to security. As the New York Times article underscores, however, basic needs and security cannot be separated. For decades, the military was anathema to non-governmental organizations. They shunned any association with the military. Although there are good reasons for maintaining a distance and distinction between humanitarian groups and the military, over the past decade a healthier appreciation for each other’s roles has emerged.

Development-in-a-Box begins with security, but encourages a transition from military to civil police as quickly as possible. In places like the Congo, however, civil police are simply insufficient. There both militias and government troops have been accused of looting villages and raping women (which has also happened in far too many UN peacekeeping operations). In this area, as in all others, standards must be defined and enforced. This didn’t happen in the Congo.

“Ill discipline in the army, an amalgam of former rebels and government soldiers fused into a national force under the peace agreement, has been another problem. Their official salary is less than a dollar a day, and even that does not come regularly. Long accustomed to living off loot, government soldiers are frequently accused of human rights violations, including rape and murder.”

The purpose of Development-in-a-Box is to move people quickly beyond living at the lower deficiency needs levels of Maslow’s hierarchy so that they can enjoy a more satisfying and joyful life. Elections are fine, but peace and security must come first. That’s a lesson that has been learned and quickly forgotten in every complex emergency of the past twenty years. The article ends with a plea:

“‘We have never suffered like this,’ said Djimo Charles Kanoya, a member of the family. ‘We spent one month in the bush. The children are hungry and they are so cold.’ Even more than food, the people need blankets and plastic tarpaulins to shelter them from the cold mountain air at night. At the hospital in Geti, Ngele Anyodi, a nurse, said children were dying of disease and malnutrition every day because they could not get to a better equipped hospital. ‘This place was looted in the fighting,’ he explained, showing the ransacked offices, laboratory and pharmacy, stripped clean of microscopes, medicines and medical equipment. ‘We cannot care for the sickest people here. We don’t have the means.’ Indeed, the nurse in charge — there are no doctors here — was also a patient, sick with malaria. An election may be around the corner, but voting, he said, is the last thing from his mind. Dead people, he said, cannot vote. ‘We need help,’ Mr. Anyodi pleaded. ‘We need to survive first.'”

Enterra’s Senior Managing Director, Tom Barnett, continues to expound his vision of “shrinking the Gap.” It’s not a quick fix, but a long-term vision. Development-in-a-Box is a new tool in the kit for helping achieve it.