Bob Trebilcock, Executive Editor of Modern Materials Handling, notes that there is a “continued need for greater visibility into the supply chain.” [“Bringing sensors and RFID together,” 28 June 2011] Greater visibility, however, requires better information and better information sharing. Technology plays a central role in improving visibility and Trebilcock asserts that the technologies that do the best job are “are data-hungry beasts.” He writes, “To get those greater levels of visibility, you have to constantly feed data to the beast, and collect data from more and more points across the supply chain.” He singles out a company called TempTrip, that “has come up with a way to tie barcode, RFID and sensor technology together to collect data that might impact the shelf life of temperature sensitive products such as fresh produce or pharmaceuticals.” He continues:

“It’s a great example of the kind of innovation we’re seeing in this space and a reason that RFID is posting impressive numbers, especially in manufacturing and logistics outside the four walls. It’s also an example of how big business is seeing the potential in supply chain solutions.”

Last fall, JC Penney revealed that it was implementing an “item-level RFID tagging program [in] 1100 stores across three product categories.” That and other similar announcements by large retailers had the staff at Supply Chain Digest “wondering [if] recent moves [may] at last be the catalyst for RFID in the consumer goods to retail industry to finally take off.” [“Do JCPenney, Macy’s Announcements Mean RFID to Finally Really Takeoff in Retail?” 2 November 2011] The article continues:

“In the last couple of years, … buoyed by a series of pilot programs and research studies, item-level tagging of apparel goods had seemed poised to breathe new life into RFID in consumer goods to retail. Walmart jumped back into the fray, with a 2010 announcement that it would rollout item-level RFID for jeans and underwear to 3300 US stores. … Even earlier, specialty retailer American Apparel had announced it was rolling out an item-level RFID program across its store network, a program currently in progress and perhaps facilitated by the fact that all its merchandise is private label. … Macy’s … announced a program it that would have RFID capabilities in place in all 850 of its Macy’s and Bloomingdale’s stores by the end of the third quarter of 2012 – an aggressive agenda indeed.”

Another Supply Chain Digest article reported on the findings from a study that concluded RFID programs are about to gain momentum. [“Is the Tipping Point Really, Truly Here for Item Level RFID Tracking in Apparel Retail?” 2 February 2012] The article stated:

“A new report from Accenture for the VICS Item-Level RFID Initiative says we are on the cusp of another tipping point, this one for adoption of item-level tagging in the apparel to retail chain in significant numbers. The report, titled Item-level RFID: A Competitive Differentiator, says that like many other technologies before it that took a long time to incubate, ‘RFID now appears set to catch fire.’ That conclusion comes in part from a survey of 58 suppliers and 56 retailers in North America, conducted by Accenture on behalf VICS (the Voluntary Interindustry Commerce Solutions Association). That research found that for some processes, such as taking store inventory, RFID technology can now drive improvements several orders of magnitude better than current standard methods. For example, taking store inventory, once a project of days or weeks, ‘can now be tallied with lightning-fast, near-perfect accuracy.'”

The big drawback to RFID has always been cost. According to the report, RFID costs will continue to decline, which is one reason it concludes that the future of RFID tagging is bright. The report concludes “that most major apparel and footwear retailers will adopt RFID technology in some part of their business within the next 3-5 years – that is, ‘if recent momentum continues.'” The article reports that there are currently “aggressive item-level RFID efforts [at] American Apparel, JC Penney, Macy’s, and – interestingly – Walmart itself, with rumors of several others, such as Gap stores, said to be ready to jump in, according to SCDigest reporting.” The “interesting” remark associated with Wal-Mart refers to the company’s earlier stillborn effort to implement an RFID system. The article continues:

“A number of studies have indicated the payback for soft goods retailers from item-level RFID can be very strong. New research from the University of Arkansas has shown the ROI for apparel vendors can also be strong. … The report also references an unknown company that is said to have shrank its cash-to-cash cycle time by 35%, lifted revenues 10% and generated 5-7% better profit margins as a result of instituting item-level RFID, according to research from Gartner.”

An example of a company that has benefited from its RFID system is Warmkraft, a Mississippi company that applies finishes to military uniforms. [“Warmkraft Boosts Order-Fulfillment Efficiency With RFID,” by Claire Swedberg, RFID Journal, 10 November 2011] According to Swedberg, Warmkraft “has reduced its manual shipping labor costs by 50 percent, while lowering its shipping–error rate down to 0.2 percent from 5 percent, by RFID-tagging its products at the item level after those goods are treated, and by then reading the tags prior to shipment.” She continues:

“Warmkraft began tagging its products destined for the U.S. Air Force (USAF) in November 2009, as required by the military agency, and has now expanded the system to its two Mississippi facilities at which uniforms are treated prior to being shipped to the Air Force—as well as, now, the U.S. Marine Corps. The USAF’s item-level RFID deployment was intended to help the U.S. Defense Logistics Agency track the receipt and issuance of uniforms at Lackland Air Force Base’s recruit training center. … The U.S. military receives uniforms from Warmkraft after the finishing company provides chemical treatments that include insect repellant, waterproofing and wrinkle proofing. Warmkraft receives uniforms from garment manufacturers, applies the appropriate chemical treatments, and ships the finished clothing to recruiting centers, where they can then be issued to soldiers. Prior to installing RFID, the firm depended on manual inspections to verify which uniforms were packed in which boxes, and to ensure that no mistakes were made before those cartons were shipped to fill military orders. In addition, regular audits were conducted on boxes just prior to their loading onto trucks, and if any errors were discovered in any of the audited cartons, the entire order would need to be manually inspected for additional errors before it could be transported. Ensuring that the proper items could be accounted for is especially important, [Ron Lack, Warmkraft’s general manager] says, because the garments belonged to the supplier, and not to Warmkraft. ‘We process the goods,’ he states. ‘We don’t own them. If they send us 1,000 garments, we have to account for 1,000 garments.'”

It is exactly that kind of requirement for inventory control that has placed the apparel industry the furthest down the RFID road. Lack told Swedberg that “the results of the technology’s deployment have been dramatic.” Nevertheless, he indicated that “if the military were not mandating the use of RFID … the company would probably not continue its item-level tagging, given the current high tag cost.” That’s surprising considering the company claims to have reduced both manual shipping labor costs and its shipping error rate. But Lack indicates that current tag prices couldn’t be covered by normal profit margins if the company was using them just for its own benefit. The company currently orders about 1.5 million tags a year at a cost of approximately 15 cents per tag. Lack told Swedberg, “At the volumes we’re doing, it’s tens of thousands of dollars a year.” Because the company is a service provider rather than a manufacturer, its profit margin is low. I suspect that if the cost of tags could be significantly reduced, Lack would not hesitate to use them regardless of whether they were required or not.

The February 2012 Supply Chain Digest article cited above claims “that tag prices are much lower than many companies perceive, having dropped rapidly in recent years.” But as Lack pointed out, how pricey tags are perceived to be has a lot to do with profit margins. The article reports, “In many cases, depending on type and quantity, tags be procured for as little as 10 cents each, and 20-cent tags are commonplace. These falling costs continue to open up tagging to move products.” Warmkraft’s tags are obviously priced right in the middle of those pricing limits, but for its normal business are still too expensive. The following figure demonstrates some cost factors. 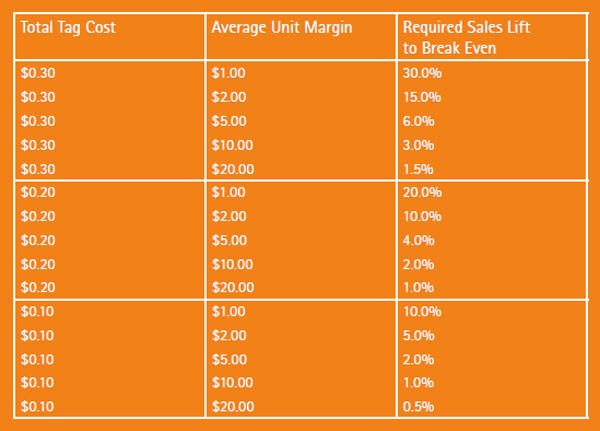 “The GS1 US EPC Item-Level Readiness Program will consist of webinars, community discussion groups and Web-based user tools. This program, the organization reports, is intended to help drive the adoption of item-level RFID EPC tags by suppliers and retailers, as the market for the tagging of apparel and other consumer products grows—prompted, in large part, by retailer adoption and subsequent requests to suppliers to apply tags to their products. The Web-based educational programs and teleconference sessions are designed to help businesses develop their EPC RFID deployment plans, learn what their costs may be and follow a timeline for adoption. The program also provides guidance regarding usage of the EPC symbol. … A product supplier can purchase a one-year membership into the program for $2,500. The annual cost for a retailer is $15,000, and includes site-specific support—including, in some cases, on-site assistance with a pilot or deployment. Suppliers can also purchase specific support for an additional charge.”

Ben Coxworth writes, “Radio frequency identification (RFID) tags are definitely a handy way of tracking shipments. Instead of simply crossing their fingers and hoping for the best, importers and exporters can check the location and condition of shipped items in real time, by remotely accessing the data being transmitted by RFID tags attached to those items.” That much, we all know. He points out, however, that “many such tags don’t work on metal objects such as shipping containers or oil drums, as the metal interferes with the functioning of the tags’ antennas.” Fortunately he reports, “A new tag developed at North Dakota State University gets around that limitation, … it uses the metal object as its antenna.” [“Antenna-less RFID tags designed to work where others don’t – on metal objects,” Gizmag, 6 February 2012] Very clever. Coxworth continues:

“Typically, when an RFID tag is to be attached to metal cargo, the antenna is placed on a spacer to keep its electromagnetic field from being affected by the metal. This results in the tags having a total thickness between 0.5 and 3 centimeters (0.2 to 1.18 inches), depending on the type of tag being used. In a rough-and-tumble shipping environment, such protruding tags can be damaged or ripped off. The North Dakota tags, however, are less than 3 millimeters thick, and are applied directly to the metal – they could even be recessed into it. This thinness is due partly to the fact that they have no antenna of their own, but also because of a unique material used in their construction. This material is highly electrically permeable, allowing the tags’ integrated circuits to receive current from the metal upon which they’re mounted. The university is currently looking for corporate partners interested in licensing the technology.”

Advances, like those being developed at North Dakota State and elsewhere, hold great promise for making RFID tags more useful as well as less expensive. The combination of those two factors does make the future of RFID technologies look brighter.