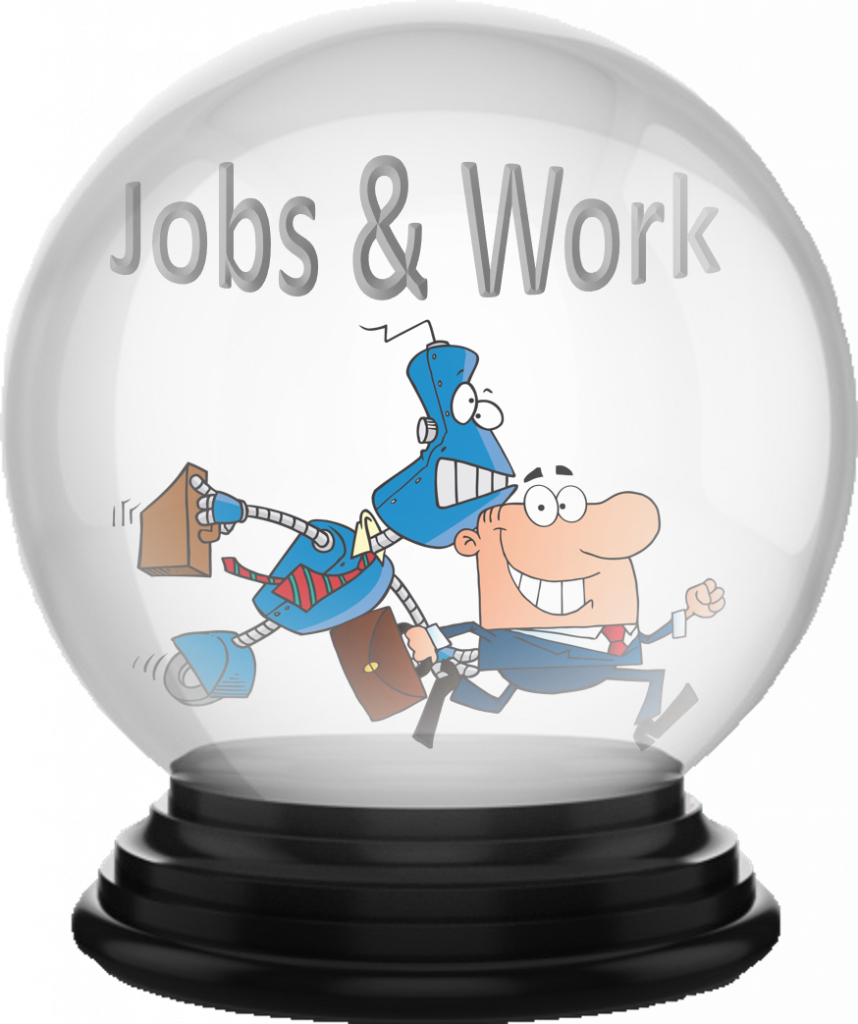 When it comes to predicting the future, the topics that matter most concern the fundamentals of life: food, shelter, health, and employment. Dark forecasts of a dystopian future in which machines empowered by artificial intelligence (AI) work and humans don’t continue to make headlines. In these forecasts, high unemployment leads to social unrest, economic chaos, and cultural collapse. A much more likely scenario, however, involves a future in which humans collaborate with or are augmented by machines. Although this vision depicts a brighter future for humankind, it still involves worker redundancies and displacements. Even workers not made redundant will find their work environments dramatically altered and the skills they require to remain gainfully employed significantly changed. As Chuck Leddy (@ChuckLeddy‏) notes, “As AI’s capabilities continue to accelerate, the technology is increasingly being used to create new ways of working and altering the skill sets that tomorrow’s workers will need in order to thrive.”[1]

The changing nature of work

People shouldn’t be surprised the nature of work is changing. Early humans living in agrarian societies required different skills than their hunter/gatherer ancestors. When the Industrial Age emerged, many people found themselves working in factories that required skill sets different than those needed on the farm. We now live in the Digital Age and, not surprisingly, required skill sets are again changing. Rahul Sharma (@Im_RahulSharma) observes, “The average business deals with huge amounts of data on a daily basis. … Nowadays, companies are required to make decisions quicker than before, because of which the importance of data has grown tremendously. So, it should not come as a surprise that a parallel evolution of wider access to data and the transformative role of data visualization has occurred amongst businesses. And, leading the charge is artificial intelligence.”[2]

Former IBM executive Irving Wladawsky-Berger predicts, “Global labor markets are set to undergo a significant transformation over the coming five years, driven both by continued advancements in high speed mobile internet and analytics as well as emerging technology breakthroughs in artificial intelligence and robotics.”[3] Historically, technology has created more jobs than it has eliminated. Many pundits worry that pattern will not hold. It’s that concern that has prompted so many dire warnings about a dystopian future. Thomas Young IV, President of Young Office, believes changes in the work environment are so profound he declares, “All companies are tech companies.”[4] He explains, “Even if you’re not a venture-backed startup in Silicon Valley, technology increasingly influences every aspect of your work day, from cloud-based storage to the artificial intelligence curated playlist you listen to as you wrap up your expense report.” So, regarding work, is the future dark or bright?

For the near-term, Wladawsky-Berger reports jobs sustainability looks good. He draws that conclusion from a World Economic Forum (WEF) survey that found:

Wladawsky-Berger notes, “Jobs expected to become increasingly redundant are generally routine-based, middle-skilled white-collar roles, including data entry clerk, accounting and payroll clerks, administrative and executive secretaries, accountants and auditors, bank tellers and cashiers. These jobs are most susceptible to advances in technology and process automation.” Stable jobs and emerging jobs may have a brighter future than jobs on that list, but they will nevertheless feel the impact of technology. As a result, Leddy explains, “One key issue is how to blend the roles played by both humans and technology, enabling each to do what they do best. Human workers may need to develop new skills in order to take advantage of AI and accommodate its growing use in the workplace.”

Rather than fear the rise of the machines, Christopher Mims believes we should embrace a future in which humans and machines collaborate. He writes, “Robots may be coming for our jobs. But a growing body of evidence suggests that workers have everything to gain from welcoming them. The more robots a country has, the higher its gross domestic product and, on average, the richer its citizens. On the other hand, a country that resists automation loses out not just on wealth creation but on new jobs as well.”[5] Embracing technology is not what scares people. Losing their jobs scares people. And, as Mitch Mac Donald asserts, most of the jobs we fill today are not going to be around in the mid- to long-term future.[6] He cites the work of Kevin Kelly, who predicts, “70 percent of jobs that exist today will be gone in 50 years’ time.” To be honest, that kind of prediction can and should generate anxiety for people just entering the workplace. Mac Donald underscores the point that any anxiety should come from changes that need to be made not from the loss of jobs. He explains, “What often gets overlooked in the discussion … is that there will be jobs. They just won’t be the jobs we know today. The jobs of the future will be ones we couldn’t have imagined when we were growing up. It’s a pretty safe bet that no one reading this ever dreamed of becoming an ‘augmented reality journey builder’ or ‘cyber calamity forecaster.’ But soon, someone will.” To state it bluntly, robotics and AI may take your job, but, with the right training and reskilling, they won’t put you in the unemployment line.

Mims concludes, “The bulk of economists argue that automation ultimately creates more jobs. That might be of little comfort to a Detroit assembly-line worker. Automation does eliminate jobs in the short term, with often painful and even permanent consequences. For the economy as a whole, however, automation drives down prices of goods and services. Humans have so far proved endlessly inventive about how to spend extra money, leading to new businesses — and more jobs.” That might seem like cold comfort to workers made redundant; but, technological advancement is relentless. We need to raise a generation of workers armed with adaptable skills and a willingness (even eagerness) to change. Tomorrow’s most successful workers will be life-long learners and probably happier for it.