Home » Smart Cities » Towards a Smart City Hierarchy of Needs 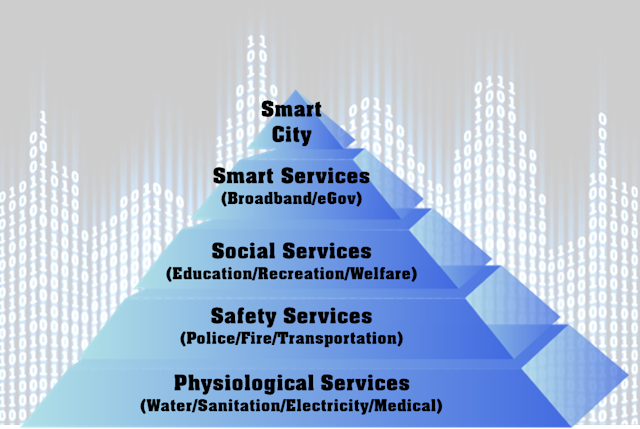 Towards a Smart City Hierarchy of Needs

Over 70 years ago, Abraham Maslow introduced the world to his hierarchy of needs framework. Like most brilliant ideas — you know, those “Why didn’t I think of that” ideas — Maslow’s hierarchy of needs suggests there is a pattern to what motivates people to achieve certain needs. His belief was that if lower level needs went unmet, then it was unlikely a person would pursue higher level needs. For example, a drowning man is only thinking about his next breath and little else. Maslow’s pyramid is normally represented in a pyramid. Starting at the bottom of the pyramid, the layers represent the following needs: physiological (food, water, air, sleep); safety; social; esteem; and self-actualization. Only at the highest level does a person live up to his or her full potential. In a previous article, I argued that cities are like living organisms whose systems function synergistically and that city leaders could use Maslow’s hierarchy of needs framework to help them prioritize smart city projects.[1] Like individuals, cities will only live up to their full potential when they reach the highest levels of the hierarchy.

Much like Maslow, Gabriela Ehrlich (@gabrielaehrlich) insists cities must address physiological and safety services needs before they can aspire to greater things. She writes, “Sufficient fresh water; universal access to cleaner energy; the ability to travel efficiently from one point to another; a sense of safety and security: These are the kinds of promises modern cities must fulfill if they are to stay competitive and provide a decent quality of life to their citizens.”[2] She continues:

“By 2050, 66 percent of the world’s population is expected to live in urban areas. The challenge will be to supply these populations with basic resources like safe food, clean water and sufficient energy, while also ensuring overall economic, social and environmental sustainability. … Cities are giant systems with countless subsystems. All of them depend on electric power and hardware to move people and things, collect data and exchange information. Without electricity, modern city management, the Internet of Things and all resulting city services remain wishful thinking. Energy is the golden thread that allows cities and economies to prosper. It is simply impossible to build an efficient urban infrastructure without reliable energy access: no electricity = no smart city.”

Although privacy is a serious concern in the information age, ensuring that both individuals and devices have unique identification schemes is essential to providing many services. India found that its poorest citizens often didn’t receive appropriate services because they didn’t have any form of identification. As a result, the country established the Unique Identification Authority whose objective is to collect the biometric and demographic data of residents, store them in a centralized database, and issue a 12-digit unique identity number called Aadhaar to each resident. Dina Gerdeman explains, “Many [Indian] residents have no identifying documents at all, and yet multiple documents are required to access government services, such as ration cards for subsidized food. Indians without the necessary documents are often denied services or resort to bribing corrupt officials to access services that they are legally entitled to receive.[3] The case includes the story of one widow who couldn’t cash a government check; she was unable to open a bank account because she lacked the proper documentation. Harvard Business School professor Tarun Khanna (@TarunKhannaHBS) told Gerdeman, “You are basically denied almost everything if you can’t prove who you are. Imagine walking around town without a photo ID or a driver’s license. You can’t buy certain things; you can’t go to the police and verify who you are. It is a surreal nonexistence. … Once the system is in place, people in India will be able to provide their 12-digit number, show fingerprints and iris scans, and immediately a central database will be able to authenticate that they are who they say they are. That’s not something you can do anywhere else in the world.” As a result, services should improve and fraud reduced.

Lasse Andresen (@forgerock1), CTO at Forgerock, points out that devices need ID as much as individuals if the smart city scheme is going to work.[4] “There’s no doubt the rise of the Internet of things (IoT) is fundamentally changing the way we interact with the world around us,” he writes. “From smartphones and tablets to fridges and light bulbs, nearly every kind of device now boasts some form of connectivity designed to make our lives easier and more efficient. However, while the IoT revolution has accelerated rapidly in recent years, it is limited by one significant flaw: IoT devices generally cannot communicate with one another. Without unique digital identities, devices cannot communicate. And with 4.9 billion devices currently part of the IoT (rising to 25 billion by 2025), there are plenty of devices suffering from an identity crisis at the moment.” Ensuring that devices can communicate is a critical part of the smart cities movement. “Undeniably, smart cities are the wave of the future,” writes Alex Scroxton (@alexscroxton), “providing one of the most intriguing and innovative applications for the internet of things (IoT), and offering untold benefits for governments and citizens around service provision, quality of life, security and sustainability in an increasingly uncertain and dangerous world. However the deployment and smooth running of smart city projects have yet to be fully worked out.”[5] Ehrlich notes:

“Cities need to substantially increase the efficiency in which they operate and use their resources. Major efficiency improvements can be achieved by horizontally interconnecting individual systems such as electricity, water, sanitation and waste management and transportation, but also security, environmental monitoring or weather intelligence. But interconnection is easier said than done. Many of the currently deployed systems in cities originate from different suppliers and they are maintained by various agencies that generally work in isolation. To connect them both physically and virtually, standardized interfaces need to be put in place.”

In my previous article (i.e., the one mentioned earlier), I asserted a holistic approach to making cities smarter is required and I discussed how cognitive computing is, for the first time, making that kind of approach possible. As Ehrlich notes, in the past urban systems (like water, power, transportation, and sanitation), have been operated in near isolation, even though they combine to give a city life. Because cognitive computers can handle many more variables than was possible in the past, system data that were once considered in isolation can now be analyzed together.

Smart cities reach their full potential when citizens, services, systems, and organizations are connected in order to make cities more livable and efficient. Tim Bradshaw (@tim) writes, “The phrase ‘connected cities’ conjures images of sensor-laden highways, live maps of underground systems and a mission control centre filled with huge screens of data.”[6] But, the key to achieving successful smart city status, he believes may be found in the palm of the hand. He reports that cities are now learning “to take advantage of the sophisticated sensors that millions of residents already carry: smartphones.” Andrea Toth agrees that mobile technology may be essential for smart city success.[7] She explains, “In essence a city is a complex intertwined system of systems that need to work and interact with each other 24/7. … Mobility is key, and can make all the difference either seamlessly aiding people and goods in getting from A to B or acting as a disruptive obstacle to the delicate ecology cities represent. Devices, fixed or nomad, that are able to interact with each other, send and receive information, analyse and interpret it are the base.” Cities, like individuals, need to achieve basic needs before they can aspire to achieving higher needs — like becoming a smart city. Fortunately, technologies are emerging that can help cities simultaneously work on both basic and higher level objectives.