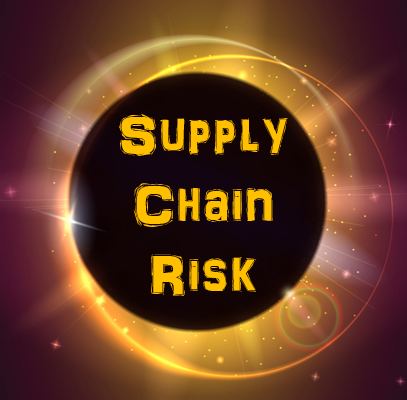 Today, much of the United States will experience a total solar eclipse. That hasn’t happened for nearly 100 years. Because of its rarity, a solar eclipse could be counted as a black swan event. Yet we all know that solar eclipses are completely predictable and not as scary as people once believed. Many ancient cultures believed an eclipse was caused by a fire-eating dragon swallowing the sun. Noel Wanner writes, “The ancient Chinese would produce great noise and commotion during an eclipse, banging on pots and drums to frighten away the dragon. The Incas, too, tried to intimidate the creatures who were eating the sun. In India they took a different tack — people would immerse themselves up to the neck in water, an act of worship they believed helped the sun fight off the dragon.”[1] Supply chain professionals have their own dragons — risks that can cause serious disruptions to supply chain operations. Just as the eclipse will pass, so will supply chain disruptions. Banging on pots and drums, however, won’t mitigate the effects of a disruption. Supply chain professionals need a good supply chain risk management program.

Fighting the Dragon of Disruption

“If you do a worldwide survey of eclipse lore,” states E. C. Krupp, director of the Griffith Observatory in Los Angeles, “the theme that constantly appears, with few exceptions, is it’s always a disruption of the established order.”[2] The same holds true for any event adversely affecting supply chain operations. Supply chain professionals know they can make all the noise they want when a disruption occurs, but the dragon of disruption won’t go away without some more concrete actions being employed. Some professionals don’t believe they should spend their time worrying about black swan events. Noted MIT professor Yossi Sheffi (@YossiSheffi) believes that could be a mistake.[3] He explains:

“When safeguarding their supply chains against disruptions, companies commonly assign the highest priority to events that happen relatively often and hit hard. Focusing on those with the highest likelihood and the greatest potential impact certainly seems like a logical approach to risk management. Except that these are not the worst perils that companies face. In fact, events that rarely happen but wreak havoc pose the most dangerous threat to corporate health. These may be called ‘black swans,’ a term popularized by Nassim Taleb in his 2007 book to describe occurrences that are thought to be impossible. … It’s not that high-impact/high-likelihood disruptions are not worrisome; their impact can be devastating for the ill-prepared. However, because such events occur relatively frequently or hit other companies, enterprises can imagine the outcomes and prepare for them. This may create something of trap for companies, allowing them to believe they have prepared for high risks when they are more exposed than they know.”

For executives still prone to ignore the possibility of black swan events, Sheffi writes, “Three principles are important to keep in mind in this context. First, statistical reasoning, the basis for most forecasting, is based on history, which may not repeat itself. Second, the worse disruption will always take place in the future (because the past is bounded and the future is not). Lastly, lack of evidence of a possible disruption is not the same as evidence of lack of potential disruption.” Much of the fear associated with solar eclipses was relieved once astronomers understood what was causing them and, even better, were able to predict accurately their future occurrences. Unfortunately, there is no way we can predict when black swan events will occur in the supply chain. But, as Sheffi notes, “There are ways to prepare for unimaginable disruptions.”

Just as data and insights helped reduce concern about eclipses, Sheffi believes data and insight can help fight off the dragon of disruption. He explains, “Creating and maintaining an emergency operations center ensures that a response can be triggered quickly. Knowing who to call to staff the center when a crisis hits is critically important. Supply-chain professionals who possess a deep and wide familiarity with the company’s operations and processes, and engineers who can qualify new suppliers and materials quickly, should be on the team. Likewise, the ability to quickly identify a disruptive event and to respond immediately is critical to a company’s efforts to keep global operations running and to recover.” I suggest that a cognitive computing platform can be a useful base on which to build a responsive supply chain risk management process. By gathering, integrating, and analyzing available data, such a system can help identify and respond quickly to emerging disruptive events. Sheffi explains:

“A new crop of software applications are able to take such data, along with other information about worldwide events and translate that into recommended actions for a company. Applications can use tailored knowledge of supplier locations, bills of material, and the role certain products and customers play in supply chains to prioritize responses. Such systems are becoming essential to fast detection and efficient response.”

A pro-active supply chain risk management system is a better way to fight off the dragon of disruption than banging on pots and drums or praying it will go away on its own.

Returning the Sun to the Sky

Unlike solar eclipses, business operations don’t naturally bounce back (i.e., the sun isn’t automatically returned to the sky). Returning business operations to normal requires both planning and action. Hailey Lynne McKeefry (@HaileyMcK) writes, “Benjamin Franklin said ‘By failing to prepare, you are preparing to fail.’ He could have been talking to supply chain managers. Whatever is done today dictates how well the organization can weather unexpected occurrences, whether natural disaster or man-made shifts, that can impact the supply chain. In fact, the only thing we can prepare for is the reality that disruptions will happen. And yet, many companies never pull together and test a detailed plan for responding quickly and effectively to unexpected upheavals.”[4] There is no one-size-fits-all recovery plan for organizations. And there are lots of experts willing to work with your company to help you create a disaster recovery plan and help you exercise it. The bottom line is that you need a good plan if you are going to return the sun to the sky (i.e., get operations back to normal after a disruption).

Reporters for timeanddate.com report myths concerning solar eclipses still abound around the world. “Fear of solar eclipses still exists today,” they write. “Many people around the world still see eclipses as evil omens that bring death, destruction, and disasters. A popular misconception is that solar eclipses can be a danger to pregnant women and their unborn children. In many cultures, young children and pregnant women are asked to stay indoors during a solar eclipse. In many parts of India, people fast during a solar eclipse due to the belief that any food cooked while an eclipse happens will be poisonous and unpure.”[5] It’s also a myth that black swan events won’t disrupt your supply chain because they are rare. They may be rare, but, as Sheffi notes, they could prove devastating. Enjoy today’s solar eclipse and then get to work preparing your company to return the sun to the sky when it suffers a disruption.