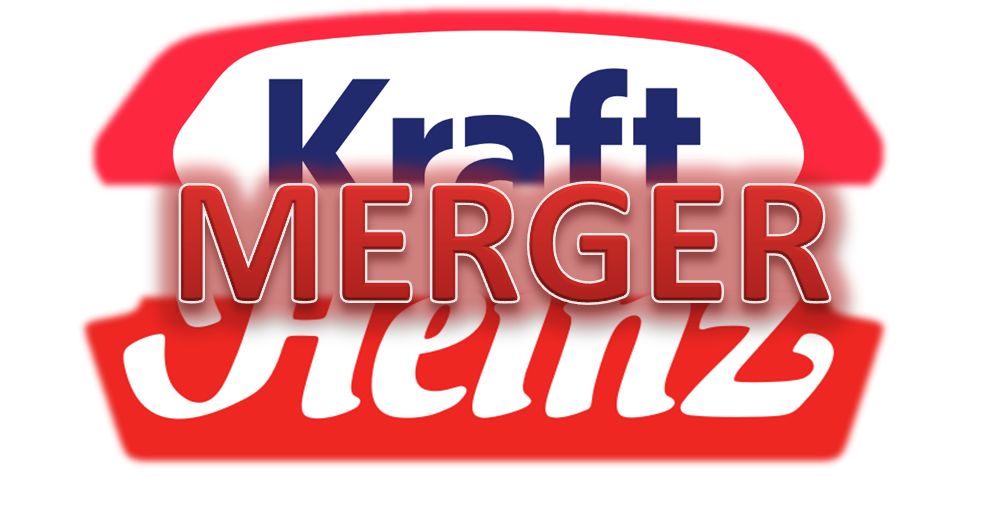 The Kraft Heinz Co. recently announced that it was laying off 2500 employees in the U.S. and Canada (including 700 from the company’s corporate headquarters in Northfield, IL).[1] The Kraft Heinz Co. was formed when Kraft Foods Group merged with H.J. Heinz to form the world’s fifth largest food company (the third largest in the United States). The merger involves two well-known investment groups, the Brazilian private equity group 3G Capital Partners LP, led by former professional tennis player Jorge Paulo Lemann and his partners, and American-based Berkshire Hathaway, headed by Warren Buffett. The personnel redundancies were not entirely a surprise since 3G Capital Partners have a long history of belt-tightening. As Teresa F. Lindeman (@pg_tlindeman) reported when the merger was first announced, “3G Capital has such a track record of cost-cutting that Standard & Poor’s cited that in issuing an opinion that the new Kraft Heinz Co. would be able to achieve a coveted investment grade rating on its debt.”[2] The Financial Times published the following graphic showing the categories of products that are sold by the merged company. 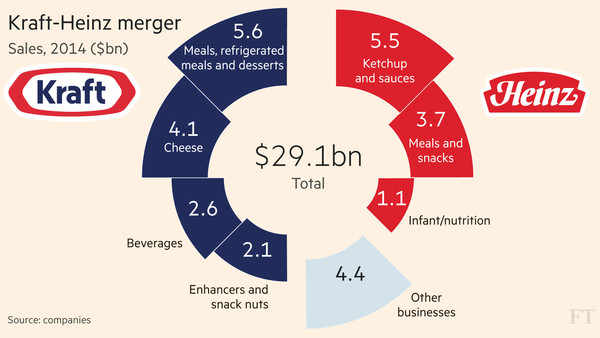 Although the products manufactured by the Kraft Heinz Co. are best known in North America, the global implications of the merger are worth discussing. Warren Buffett is on record about 3G Capital stating, “These guys have global ambitions.” Of course, Buffett’s own ambitions are just as large, which is why Berkshire Hathaway has teamed with 3G Capital on each of its past three large food deals. Their ambitions go beyond owning international corporations. They want to sell their products around the world as well. Inevitably global ambitions lead to extended and more complex supply chains. To achieve the kinds of savings that 3G Capital believes it can make with the new company, it would do well to invest in what I refer to as a Cognitive Value Chain™.

A Cognitive Value Chain is one that takes a holistic view of the business landscape and the ecosystem in which today’s global businesses must survive. As the term suggests, a Cognitive Value Chain is empowered by cognitive computing capabilities, such as those found in the Enterra® Enterprise Cognitive System™. Cognitive computing is capable of taking into consideration many more confounding variables than traditional computing systems, which means that analysis is more complete. In addition, by combining artificial intelligence, advanced mathematics, and semantic reasoning, cognitive computing systems can generate optimized solutions, and actionable insights (including predictive analytics) that have been previously unobtainable. Let’s examine just a few of the use cases that make cognitive computing so valuable in a global value chain.

Supply chain visibility is a big deal. Unfortunately visibility often decreases when supply chains are extended. Using cognitive computing, companies have a much better chance of improving supply chain visibility because such systems can make sense of many more of the variables that could have an effect on performance. Cognitive computing systems can help optimize inventory by improving demand planning. It can improve sales through trade promotion optimization. And it can improve order fulfillment by helping companies understand how and where unexpected delays could have a negative impact. A cognitive computing system can learn where the critical pinch points are and can help devise strategies to mitigate potential disruptions.

One lesson that many food companies have learned the hard way is that food preferences aren’t universal. The hamburger that sells well in Des Moines won’t sell as well in Delhi. As The Economist noted several years ago, “Even McDonald’s and Starbucks, which appear to sell the same stuff everywhere, in fact vary their offerings from place to place.”[3] Gary Silverman (@GaryRSilverman) believes this is a lesson that the new Kraft Heinz company is going to have to learn.[4] He explains:

“One of the reasons that Kraft Foods is combining with Heinz is to sell its products outside the US. But, as an American who grew up on our national cuisine and has travelled the world as a reporter, I see at least one big obstacle standing in its way. I speak of American cheese – the processed sort, sold as slices pressed between sheets of clear plastic, or reconfigured into gooey spreads or fluffy powders to create some of the most renowned comfort foods in our continental republic. … The North American food business that today carries the Kraft name has diversified into other provisions, but processed cheese, and meals made with it, still account for a big part of its revenues and identity. And that spells trouble. The fact of the matter is that cheese of the kind pioneered by Kraft doesn’t have much flavour, which helps explain why so many people in other places don’t eat it.”

Cognitive computing can assist with this challenge by helping companies understand which products are likely to sell best in certain areas (right down to the neighborhood level) based on taste preferences. Armed with that kind of insight, products need not languish unsold on store shelves until their expiration dates require them to be discarded.

Cognitive computing systems can also help decision makers make better choices. In its Fifth Annual Technology Trends report, Deloitte Consulting analysts conclude, “For organizations that want to improve their ability to sense and respond, cognitive analytics can be a powerful way to bridge the gap between the intent of big data and the reality of practical decision making.” Cognitive computing systems can even automate routine choices; however, determining which decisions can be automated and which decisions still require human intervention requires some serious thought. Having said that, I’m a big believer in management-by-exception. By allowing smart machines to make routine decisions, human decision makers can spend their valuable time dealing with exceptions. This kind of human/machine collaboration will characterize digital enterprises in the decades ahead.

Marketing and the Digital Path to Purchase (DP2P)

Both manufacturers and retailers want to see products sell and sell quickly. Today there is no single path to purchase (i.e., no funnel into which potential consumers enter only to emerge as a buyer at the other end). Modern technologies, especially mobile technologies, have empowered the consumer. They now find it easy to jump on or off the path to purchase with the click of a mouse or the flick of a finger. Using advanced analytics, cognitive computing systems can help manufacturers and retailers better understand their customers so that they are offered the right products in the right amount at the right price at the right time. Cognitive computing systems can also help ensure that the customer’s experiences across channels are seamless and the messaging is consistent. Cognitive computing, as noted above, can also make the order fulfillment process more efficient so that consumers’ expectations are met at the most critical touchpoint they have with brands.

Once a company starts using a cognitive computing system, it will undoubtedly find uses for the system that weren’t originally imagined. The system becomes a collaborative business partner that never sleeps, never takes a break, and is always looking to improve its performance. That’s why I call a supply chain empowered by such a system a Cognitive Value Chain. Creating a Cognitive Value Chain can help any company overcome many of the challenges faced by today’s complex, global operations.