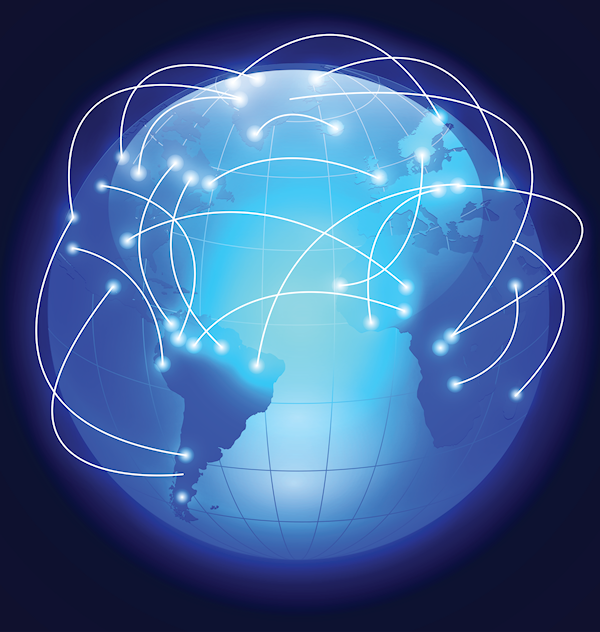 We not only live in interesting times we live in perilous times. To make this point, Ian Bremmer (@ianbremmer), president and founder of Eurasia Group, quotes Vladimir Ilyich Lenin, who once stated, “There are decades where nothing happens; and there are weeks where de­cades happen.” Bremmer goes on to write, “This quote says a lot about the impact of the novel coronavirus in an already fast-changing world. There is no history-changing revolution on the horizon, but the past few months of the pandemic have tur­bocharged four of the most significant geopolitical trends of recent decades: growing inequality, eroding legitimacy of democratic institutions, antiquated global architecture, and ever faster lev­els of technological disruption.”[1] As a result, corporate resiliency never been more important or more necessary. From the moment I established Enterra Solutions®, the objective has been to explore ways we can use cutting-edge methods and cognitive computing technologies to make organizations and infrastructure resilient to multi-faceted challenges. Understanding the geopolitical trends identified by Bremmer are critical to making enterprises more resilient and, as a result, able to mitigate risk systematically and exploit emerging opportunities.

These seismic geo-political shifts and their specific national instantiations are modifying the way consumers and corporations behave (both temporarily and structurally); and, those changes have a cascading effect upon the status quo. Organizational ability to capture data and interpret the signals in order to Sense, Think, Act and Learn® — i.e., the ability to adapt systemically to those changes — will be a key hallmark of the most valuable companies over the coming decades. This enterprise resiliency will be enabled in a data-driven world by new technologies and methodologies, such as Enterra’s cognitive computing and process automation technologies, that can adapt actions on the fly and autonomically make decisions to respond intelligently to a rapid change.

Bremmer predicts, “Economic con­ditions will worsen as unemployment­ insurance funding runs low, the num­ber of foreclosures grows, furloughs become permanent, and winter makes life even more difficult for restaurants and the travel industry. This isn’t just a US trend; political leaders around the world are now debating whether they can afford more fiscal stimulus at a time when many people desperately need it.” Growing inequality was a much-discussed topic long before the pandemic blossomed. Katherine Schaeffer (@katschaeffer), a Research Analyst at Pew Research Center, reports, “Over the past 50 years, the highest-earning 20% of U.S. households have steadily brought in a larger share of the country’s total income. In 2018, households in the top fifth of earners (with incomes of $130,001 or more that year) brought in 52% of all U.S. income, more than the lower four-fifths combined, according to Census Bureau data.”[2]

More importantly, she reports, “The wealth gap between America’s richest and poorer families more than doubled from 1989 to 2016.” Here’s the problem according to Bremmer, “As the global economy sputters forward, widening wealth divides will spur anger and protests.” Businesses need to be ready for disruptions resulting from this unrest. Schaeffer notes that it’s not just the lower income families that are being affected by growing inequality. She reports, “The share of American adults who live in middle-income households has decreased from 61% in 1971 to 51% in 2019. During this time, the share of adults in the upper-income tier increased from 14% to 20%, and the share in the lower-income tier increased from 25% to 29%.” Some of the anger displayed by supporters of populist movements are a direct result of growing economic inequality. Many communities and groups feel dislocated, alienated, left behind, and/or otherwise disconnected from today’s economy. They are longing for a time gone by, a time they believe they were in a more prosperous and/or dominant position. Other communities feel that they have never been economically connected or politically represented adequately and are growing increasingly alienated as well.

Bremmer sees a growing threat to democratic institutions, including the government and the free press. He writes, “In the US, deep divisions within the electorate and growing public anger at the nation’s political establishment have been building for years. The president, Congress, the civil service, and the news media have increasingly become targets of public vitriol.” The rise of social media, once touted as giving a voice to everyone, have turned out to provide the loudest voice to fanatics and zealots. Dan Gillmor (@dangillmor), co-founder of the News Co/Lab at Arizona State University’s Walter Cronkite School of Journalism and Mass Communication, notes, “The re-emergence of public bigotry has nothing to do with technology, except to the extent that bigots use it to promote their malignant goals. Meanwhile, the institutions that are supposed to protect liberty — journalism among them — are mostly failing to do so.”[3]

Bremmer writes, “The problem of political polarization and reduced confidence in institutions is accelerating globally.” That is not good news for businesses. Leah Lievrouw (@Leah53), professor of information studies at the University of California-Los Angeles, notes, “To date, virtually no democratic state or system has sorted out how to deal with this challenge to the fundamental legitimacy of democratic processes, and my guess is that only a deep and destabilizing crisis (perhaps growing out of the rise of authoritarian, ethnic or cultural nationalism) will prompt a serious response.”[4]

One of the great triumphs coming out of the Second World War was the establishment of global institutions designed to deal with systemic international problems. The United States was the primary driver of most of these institutions. However, Louis Charbonneau (@loucharbon), a United Nations Director, reports, “The network of multilateral institutions that oversees everything from states’ progress toward the Sustainable Development Goals (SDGs) to the daily distribution of humanitarian aid is under threat as never before.”[5] He argues, “Institutions like the UN and the ICC may not be perfect, but they are worth preserving and improving. If the international community is serious about laying the groundwork for improving the lives of people around the world and achieving the SDGs, these institutions need to be healthy, effective and independent.”

Bremmer believes neither current international organizations, nor their leadership, are not up to the task. He explains, “Even before the arrival of the coronavirus, the world had entered a period of geopolitical recession, one in which international leadership and cross-border cooperation were evaporating, with fewer recognized referees to rebuild confidence in the existing global system. The pandemic and its economic and political effects have revealed just how broken the international system really is and how inadequate our Cold War–era multinational institutions are for the tasks at hand.” Like Charbonneau, Bremmer decries the rise of “nation first” strategies that undermine a global approach to international challenges. Unfortunately, he offers no solutions for perceived problems. As a result, many global businesses are rising to the challenges because they see their own futures in jeopardy, or evolving greatly, and do not see coherent leadership from today’s governmental and political organizations.

Few pundits would argue that the 75th anniversary of the United Nations and the 76th anniversary of the Bretton Woods Agreement finds the world in a chaotic state . Rather than an ordered multi-polar world, we are currently flailing and seeking to find balance and leadership as we careen into globalizations next stage. We are in middle of great change exacerbated by global pandemic that has been layered on top of mega issues surrounding global economic, political, climate, inequality, education, healthcare, and other components of human life. There is a need to decode and manage the grand complexity challenge presented by these interwoven macro-issues — no effective algorithm for understanding and explaining these issues has yet presented itself. This will ultimately be achieved by evolving and reforming global institutions like the United Nations and entering into a new sets of grand ordering agreements like Bretton Woods while quickly developing a critically needed set of leaders who can successfully lead nations and the world through this uncertain landscape as we did seventy-five years ago.

Bremmer observes, “We’re witnessing an acceleration in the rivalry between the still dominant US and the still ascending China. No arena of competition will become more important than the creation of disruptive new technologies.” Among the technologies to which he refers are “automation of the workplace, machine learning, and AI.” To that list, I would add quantum computing and cryptocurrencies. Bremmer goes on to note, “The pandemic has decimated the engines of the 20th-century economy — factories and brick and­ mortar retail — while turbocharging the engines of the 21st, like information technology and online retail.” Here’s the rub. Bremmer notes, “There are segments of society that can’t make this great leap forward. The question of how governments can rewrite the social contract to provide for as many as possible remains urgent and vital.”

Business analysts have, for a number of years, urged companies organized around industrial age principles to transform into digital enterprises. At the heart of most of these transformation efforts you will find cognitive technologies, like Enterra’s Cognitive Core™. The Cognitive Computing Consortium notes, “Cognitive computing makes a new class of problems computable. It addresses complex situations that are characterized by ambiguity and uncertainty; in other words, it handles human kinds of problems.”[6] Transforming, for many businesses, is a matter of survival. Birger Thorburn, Chief Technology Officer at Experian, writes, “According to research from Forrester Consulting and [Experian], 81% of executives feel traditional business models will disappear in the next five years due to digital transformation. Similarly, recent IDC research reveals that 85% of enterprise decision-makers say they have a time frame of two years to make significant inroads into digital transformation or they will fall behind their competitors and suffer financially.”[7]

Bremmer concludes, “As with every great technological leap forward in human history, the digital revolution will create both winners and losers. Over time, these and other technologies will unlock more human potential by creating unprecedented opportunities for distance learning, the practice of telemedicine, advances in agriculture, and the breakthroughs that will create the ‘smart cities’ of the future. The most innovative parts of our economies have suffered the least damage.” The challenge for businesses is to be resilient enough to make it through a period of upheaval and weather the storms ahead. Because the pandemic made the relevance of historic data somewhat suspect, Enterra found new ways to combine and analyze data in the Enterra Global Insights and Optimization System™ so that clients can make decisions based on the latest changes in the business landscape. Most analysts agree that the companies demonstrating the greatest agility, and the ability to make better decisions based the most current data, will be the winners in the years ahead.