Home » Best Practices » Clay Christensen: At the Intersection of Innovation and Targeted Marketing 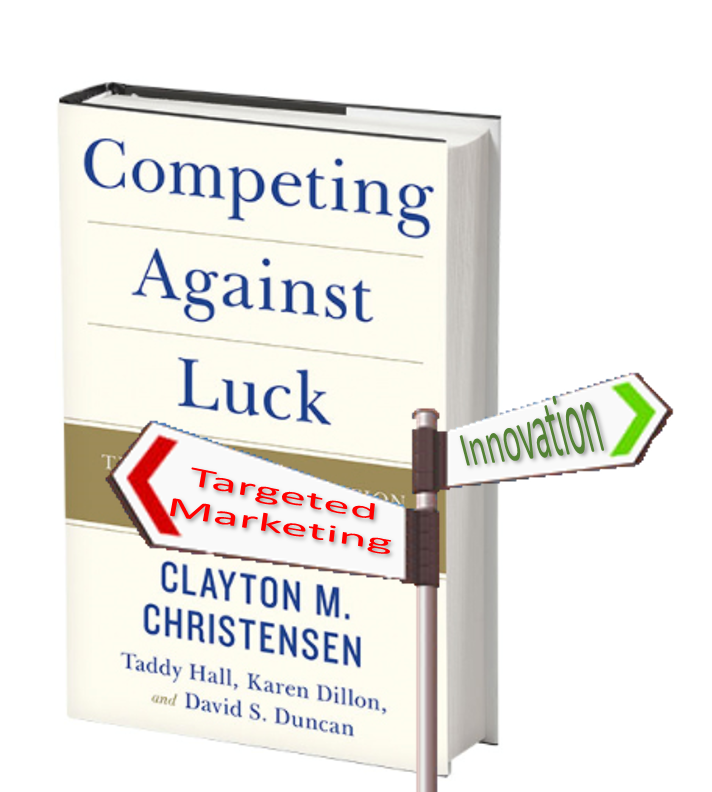 Have you ever heard of job theory (or the Theory of Jobs to Be Done)? In the coming years, it may become as familiar to you as the phrase “disruptive innovation.” Both concepts come from the mind of business and innovation guru and Harvard Business School professor Clayton Christensen (@claychristensen). In his latest book, Competing Against Luck: The Story of Innovation and Customer Choice, he and his coauthors Karen Dillon (@KarDillon), Taddy Hall (@taddyhall), and David S. Duncan, use the Theory of Jobs to Be Done as the foundation of their thinking. According the book’s introduction, that theory helps companies understand their “customers’ struggle for progress and then [creates] the right solution and attendant set of experiences to ensure [they] solve [their] customers’ jobs well, every time.” They add, “This is a book about progress. Yes, it’s a book about innovation — and how to get better at it. But at is core, this book is about the struggles we all face to make progress in our lives.” It seems to me the Theory of Jobs to Be Done sits at the intersection of innovation and targeted marketing. Christensen writes:

The Theory of Jobs to be Done harkens back to a statement offered by Harvard Business School marketing professor Theodore Levitt, who famously stated, “People don’t want to buy a quarter-inch drill. They want a quarter-inch hole!” In an interview with Gwen Moran (@gwenmoran), Christensen noted that Airbnb did a good job of recognizing why customers wanted to hire it for its services.[2] Moran writes, “The sleeping-space-for-hire company understands that customers may want to hire a hotel to do a number of jobs: to provide a room with a bed, present a suitable location for a meeting with an important client, or network with other people who are staying there. However, Airbnb is focused on providing a place where people can have a home base to sleep and not be bothered.” Or as Christensen put it, “When Airbnb emerged, they were focused on just one of these jobs, and they nailed it.”

Susan Adams (@susanadamsnyc) asked Christensen, “Can an entrepreneur develop a successful product based on your theory about jobs that need to get done?”[3] Without hesitation, he replied, “Absolutely they can. My original theory about disruption was a theory about competitive response. An entrepreneur needed to predict whether the incumbent leaders would kill them, ignore them or flee from them. The theory of disruption is a theory of competitive response. But alone it doesn’t help you predict the success of a new product. If you develop a product and it doesn’t help the customer get a job done, then there is no causal mechanism that makes the customer buy your product. You have to put the two together, disruption and what’s the job the customer is trying to do.”

Companies that have clearly understood the job for which their customers wanted to hire them often find their company names becoming synonymous with that job. In England, for example, it is more common for people to say they are going to “Hoover” their carpets than it is for them to say they are going to vacuum them. When mimeograph machines were replaced by copiers, people were just as apt to say “Xerox that for me” as they were to say “Copy that for me.” Today, people are just as likely to say “Google It” as they are to say “Do an Internet search.” You get the point.

In a review of Christensen’s book, Philip Delves Broughton (@delvesbroughton) writes, “The Theory of Jobs to Be Done has the essential trait of any good management theory: Once explained, it seems glaringly obvious.”[4] He adds:

“But it is also rarely applied. Once they reach a certain size, companies turn inward. They want to do more of what they know they are good at and not go through the hassle of changing the way they do their job. Entire corporate divisions are given over to things that have nothing to do with the job customers might hire the company to do. Strategists lord it over people who do the real work. Accountants trip up sales. Companies organize around products and functions, not the jobs to be done for the customer. Data is gathered, massaged and sent up through the organization to serve as the basis for executives to make decisions intended only to impress each other. As Mr. Christensen puts it: ‘Even great companies can veer off course in nailing the job for their customers — and focus on nailing a job for themselves.'”

Leigh Buchanan (@LeighEBuchanan) observes, “The jobs metaphor frames the trajectory of a customer’s relationship with a product in intriguing ways. For instance, the initial purchase is a ‘big hire.’ Each time the customer uses that product thereafter is a ‘little hire.’ For companies that prize repeat business and reputation, little hires matter just as much as big ones.”[5] She adds, “Often, when customers hire one product, they fire another. When mobile phones came along, wristwatches got their pink slips en masse.” So, in a way, the Theory of Jobs to Be Done also supports Joseph Schumpeter’s theory of creative destruction. Good theories almost always support or build upon other good theories. Or as Christensen told Adams, “The way you build a theory is finding what it can’t explain.”

The business landscape is constantly changing and new technologies are some of the forces causing that change. Business leaders who want their companies to survive and thrive in the decades ahead would do well to read this book and embrace its principles.