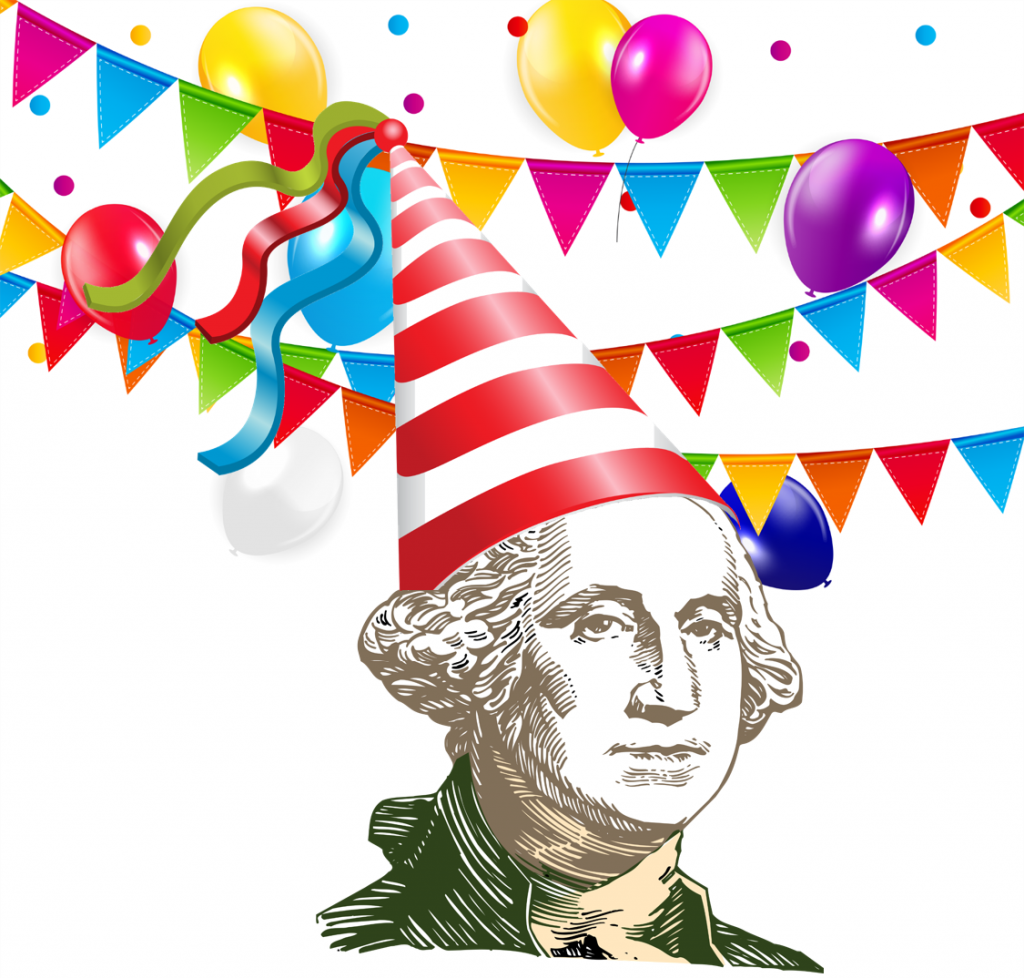 American politics have always been complicated. That fact can be demonstrated by examining the life of America’s first president George Washington. Washington, like many politicians of his era, was an enigma — a proponent of liberty and a slave owner. Nevertheless, most historians agree the greatness of his character outweighs the severity of his faults. When Washington was born, Americans were using the Julian calendar and his birth date was the 11th of February 1731. The staff at the National Archives notes, “In 1752, however, Britain and all its colonies adopted the Gregorian calendar which moved Washington’s birthday a year and 11 days to February 22, 1732.”[1] The staff continues, “Americans celebrated Washington’s Birthday long before Congress declared it a federal holiday. The centennial of his birth prompted festivities nationally and Congress established a Joint Committee to arrange for the occasion. At the recommendation of the Committee, chaired by Henry Clay of the Senate and Philemon Thomas of the House, Congress adjourned on February 22, 1832, out of respect for Washington’s memory and in commemoration of his birth.”

Thirty years later, Congress started another tradition. The National Archives Staff explains, “Prompted by a memorial from the mayor and other citizens of Philadelphia, the House and Senate commemorated the 130th Anniversary of Washington’s birth by reading aloud his Farewell Address. In a special joint session held in the House Chamber, the House and Senate, along with several cabinet officials, Justices of the Supreme Court and high-ranking officers of the Army and Navy, gathered to listen to the Secretary of State read the address aloud. Eventually, the reading of George Washington’s Farewell Address became an annual event for the Senate, a tradition that is still observed to this day.” The staff at Mount Vernon, Washington’s beloved home, writes, “Washington concluded his address with some brief musings on his legacy. Given his forty-five years of service, he hoped that his countrymen would view his past mistakes ‘with indulgence’ and that history would relegate them ‘to oblivion.’ He closed by expressing his anticipation of a retirement in which he enjoyed the fruits of the nation’s ‘mutual cares, labors, and dangers’ over the last several years. That is, ‘the benign influence of good laws under a free government.'”[2]

In spite of these early recognitions of Washington’s contributions to his country, his birthday did not become a legal holiday until 31 January 1879 when Congress added February 22nd to the list of holidays to be observed by federal employees in the District of Columbia. The History Channel staff notes, “Senator Steven Wallace Dorsey of Arkansas was the first to propose the measure, and in 1879 President Rutherford B. Hayes signed it into law. The holiday initially only applied to the District of Columbia, but in 1885 it was expanded to the whole country. At the time, Washington’s Birthday joined four other nationally recognized federal bank holidays — Christmas Day, New Year’s Day, the Fourth of July, and Thanksgiving — and was the first to celebrate the life of an individual American. Martin Luther King Jr. Day, signed into law in 1983, was the second.”[4]

Two questions might be rising in your mind: First, if Washington’s birthday is on 22 February, why are we celebrating it on 17 February this year? Second, why do so many people refer to the holiday as Presidents Day? In answer to the first question, the staff at White House notes, “We celebrate Washington’s Birthday on the third Monday of February each year — the result of the 1968 law mandating that a number of federal holidays occur on Mondays.”[3] They add, “Incidentally, the third Monday in February can never fall on the 22nd, meaning the federal holiday will never land on Washington’s actual birth date.”

In answer to the second question — Why do so many people refer to the holiday as Presidents Day? — the White House staff notes, “The third Monday in February … falls between Abraham Lincoln’s birthday on February 12 and Washington’s 10 days later.” They add, “Rep. Robert McClory (R-IL), representing ‘the land of Lincoln,’ attempted to change the name of the holiday to ‘Presidents’ Day’ in 1968. But that measure proved to be particularly controversial for legislators from Virginia, Washington’s home state. The provision was soon dropped.” Washington and Lincoln led America during particularly perilous times and many people believe they both deserve to be honored. The History Channel staff observes that marketers had a bigger influence on the widespread use of Presidents Day than politicians. They explain, “Marketers soon jumped at the opportunity to play up the three-day weekend with sales, and ‘Presidents Day’ bargains were advertised at stores around the country. By the mid-1980s, Washington’s Birthday was known to many Americans as Presidents Day. This shift had solidified in the early 2000s, by which time as many as half the 50 states had changed the holiday’s name to Presidents Day on their calendars.” Not every president has risen to the high bar established by Washington and Lincoln. For that reason, I believe an official name change honoring all U.S. Presidents would be inappropriate. The unofficial name for the holiday is sufficient.

The History Channel notes, “Washington [is] venerated as the most important figure in American history, and events like the 1832 centennial of his birth and the start of construction of the Washington Monument in 1848 were cause for national celebration.” The staff at Leadership Excellence discuss leadership traits Washington displayed that remain an example of excellence.[5] They are:

1. Dignity and compassion. “Washington was a terrific ‘people person’ who chose his associates carefully and instilled confidence in those around him. Washington was a man of exceptional integrity, and he carried himself with dignity and self-confidence. As David McCullough writes in his book 1776, Washington had ‘the look and bearing of a man accustomed to respect and to being obeyed. He was not austere. There was no hint of arrogance. ‘Amiable’ and ‘modest’ were words frequently used to describe him, and there was a softness in his eyes that people remembered.’ Yet Washington was careful about whom he associated with and the effects his associations had on the overall success of his objectives. Washington said, ‘Associate with men of good quality if you esteem your own reputation; for it is better to be alone than in bad company.’ … Washington earned the respect, loyalty, and confidence of his subordinates because he was a man clearly guided by principle who likewise showed respect, loyalty, and confidence in his men.”

2. Good judgment and prudence. “Washington was characterized by good judgment and prudence. In a public eulogy of Washington delivered by Fisher Ames, Ames made the following point about why Washington was so well equipped to serve and lead his country: ‘His prudence was consummate, and seemed to take the direction of his powers and passions; for as a soldier, he was more solicitous to avoid mistakes that might be fatal, than to perform exploits that are brilliant; and as a statesman, to adhere to just principles, however old, than to pursue novelties.’ Thomas Jefferson had even higher praise for his fellow Virginian, writing: ‘Perhaps the strongest feature in his character was prudence, never acting until every circumstance, every consideration, was maturely weighed; refraining if he saw a doubt, but, when once decided, going through with his purpose, whatever obstacles opposed. His integrity was most pure, his justice the most inflexible I have ever known, no motives of interest or consanguinity, of friendship or hatred, being able to bias his decision. He was, indeed, in every sense of the words, a wise, a good, and a great man.’ George Washington’s judicious decision making guided the new nation to victory in war and stability in its governance.”

3. Valor and determination. “Along with uncommon valor, Washington displayed a dogged determination to see the great American experiment succeed. Despite many setbacks on and off the battlefield during the Revolutionary War, General Washington’s relentless efforts to instill discipline in his men allowed him to train and lead the Continental Army to victory over the supposedly superior forces of Great Britain. Years after the war ended, he became president of the Constitutional Convention, lending his guiding hand in establishing the new government of the United States. As the first president of the United States under its new constitution, President Washington governed carefully and cautiously, always aware that he was setting important precedents for the nation and always refusing (as he had in the aftermath of the war) to abuse his power or assume dictatorial authority. Through all of these endeavors, George Washington displayed remarkable organizational and administrative skills, and he showed tremendous courage by risking his life, liberty, wealth, and reputation for his countrymen. Although he often longed to return to private life, he always answered the call of his nation for the lasting benefit of all.”