Home » Food and Drink » Walmart and the Food Supply Chain

Walmart and the Food Supply Chain

Selling groceries is big business. Supermarket News reports, “The 75 largest food retailers and wholesalers in the U.S. and Canada combined to produce $893.08 billion in revenues in 2008, up 7.6% over their total in the preceding year” [“SN’s Top 75 Retailers for 2009“]. The 2009 figures are probably not yet available, but the recession may have had some effect on the volume. The revenue, however, is not spread equally among the 75 retailers. The article notes that “the 10 largest companies on the list accounted for about 68.7% of the total volume on the list, the same proportion they comprised a year ago. Those 10 largest food retailers had combined revenues of $613.2 billion.” In magnitude of sales, the ten largest companies reported in the article are:

Just because these retailers sold an enormous amount of food doesn’t mean that they were all profitable. Kroger, for example, reported a net loss for the third quarter of 2009 of $874.9 million. Analysts attribute this loss to “intensifying price wars among grocery stores to lure budget-constrained consumers” through their doors [“Kroger Q3: Earnings Miss on Economic Woes,” Seeking Alpha, 9 December 2009]. David B. Dillon, Kroger’s chairman and chief executive officer admits that stiff competition is part of the challenge. In a company press release, he said, “In the near-term, our financial results are being pressured by factors including persistent deflation, unusually intense competition and the cautious mindset of customers.”

Why do stores participate in price wars and end up losing money? According to Mr. Dillon, the answer is that they are trying to foster customer loyalty. What started the price wars? Most analysts attribute them to Walmart’s growing share of the food market. When it comes to getting products from suppliers to consumers, Walmart remains the 600-pound gorilla. If Walmart’s competitors are hoping for relief, they shouldn’t hold their breath. Walmart has announced that it is working hard to reduce prices even further by eliminating more middle men [“Walmart takes aim at supply chain cost,” by Jonathan Birchall, Financial Times, 4 January 2010]. Birchall reports:

“Walmart is launching a drive this year to cut billions of dollars of costs from its supply chain by combining its store purchasing across national frontiers. The effort is part of plans by the world’s largest retailer to increase the proportion of goods that it buys directly from manufacturers, rather than through third-party procurement companies or suppliers. Eduardo Castro-Wright, the head of Walmart’s US stores, has said that the retailer saw the opportunity to consolidate global sourcing as “a major source of leverage for the company in years to come”. With annual sales of more than $400bn, Walmart is famously tough in negotiating with its suppliers, exploiting the scale of its buying to gain discounts. It spends about $100bn on purchasing private label products such as its Faded Glory and George brand clothing, or its Great Value food and home products. But it acquires less than a fifth of these goods directly from the manufacturers, and has generally made its purchases on a country-by-country basis.”

Although Walmart’s new acquisition strategy may be good for the company (and probably be good for manufacturers/growers and consumers), it’s not good news for most current middleman suppliers and distributors or for Walmart’s competitors. Birchall continues:

“Mr Castro-Wright has estimated that shifting to direct purchasing could reduce costs by 5-15 per cent across the supply chain within five years potential savings of $4bn-$12bn if the retailer were to meet its long-term goal of shifting to sourcing about 80 per cent of purchases directly. As part of its effort to combine purchasing for the 15 countries in which it operates, Walmart has established four global merchandising centers for general goods and clothing, including a center in Mexico City focused on emerging markets, and a center in the UK to serve its George brand. … By the end of the year, the retailer plans to be directly purchasing sheets and towels for its stores in the US, Canada and Mexico, as well as its clothing for its Faded Glory line and for licensed Disney character clothing.”

The focus of this post, however, is not general consumer products but food. Walmart is also planning to apply its new strategy in that arena.

“It is also shifting to direct purchasing of its fresh fruit and vegetables on a global basis, rather than working through supplier companies. … It … plans to expand initial combined purchasing of fresh fruit and vegetables for its stores in the US, Canada and Mexico, after an initial pilot test with apples that it says led to a 10 per cent reduction in purchasing costs. Walmart says it expects to expand the program through other categories, including seafood, frozen food and dry packaged groceries. The direct purchasing of fresh produce, using procurement offices in producing countries such as South Africa, New Zealand, Brazil and Chile, builds on the established practices of the company’s Asda subsidiary in the UK, which in turn reflects the higher use of direct sourcing in Europe.”

Direct purchasing from growers will help Walmart keep acquisition costs lower and it should help the company improve the quality and the security of the food it provides its customers. Of course, Walmart still has to move food crops from the field to the shelf which means that not all former distribution systems are going to disrupted. My company, Enterra Solutions, believes that efficiencies in the supply chain can still be made and over the coming years working on products that will help develop an “intelligent supply chain” will continue to be a focus of research and development. The first step along this path is offering software that can help manufacturers comply with fulfillment requirements demanded by retailers. We call this offering our Compliance Management System. For more on the subject of compliance, read my post entitled Profiting From Following the Rules. I’ll be writing more on this subject in the months ahead. Today my colleague Tom Barnett and I will be addressing the subject at an IBM-sponsored conference in New York. As competition gets tighter, finding efficiencies becomes even more important be they in the food supply chain or in the broader consumer packaged goods supply chain. 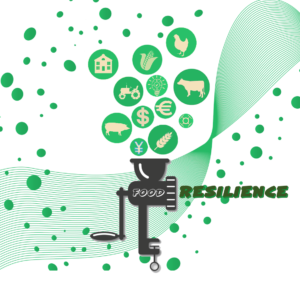