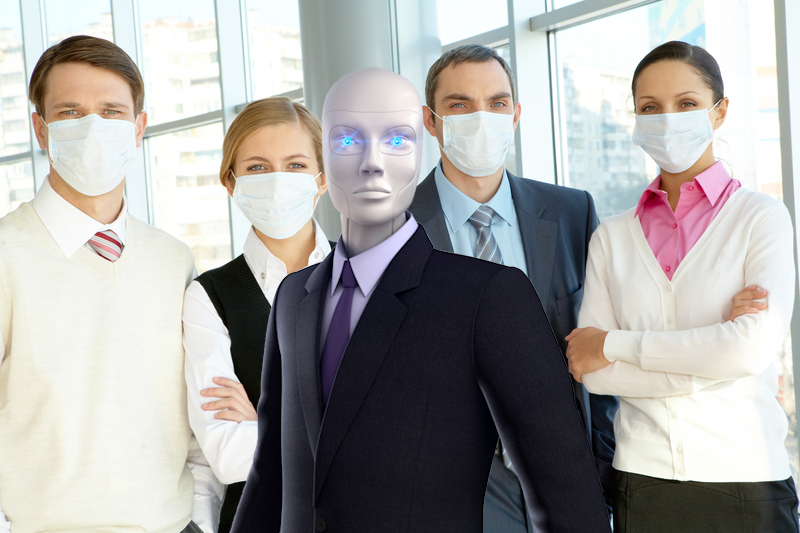 The Pandemic Adds to Worries about Jobs Sustainability

Some companies have learned at least one lesson during the COVID-19 pandemic: Robots and artificial intelligence (AI) aren’t really affected. Greg Ip (@greg_ip) and Angus Loten (@angusloten) report, “Robotics and artificial intelligence were already performing a growing range of tasks more cheaply and reliably than humans. With the pandemic, they demonstrated another advantage: They don’t spread the virus. One company that learned this lesson was Stanley Black & Decker Inc., which invested heavily in systems of autonomous robots in the months before the pandemic.”[1] They go on to note, “The original goal was to cut costs and boost output to better compete with a rising number of tool manufacturers in Mexico, he said. But the pandemic highlighted another benefit. Many manufacturers had to shut down factories and reorganize to space out workers. For Stanley, the robotic systems, made by Rockwell Automation Corp. for a total of $1.5 million, kept the South Carolina plant from shutting down at the height of the outbreak.” Many pundits fear the pandemic will hasten implementation of automated systems and put millions of people permanently out of work.

How will automation affect employment?

Canadian labor executives Laird Cronk (@Laird4bcfed) and Sussanne Skidmore (@SussanneRS) express what many labor leaders are feeling. They write, “If you think automation has nothing to do with you and your job, you may want to think again. According to a new BC Federation of Labor research paper, fully 60 per cent of British Columbia’s labor force faces a medium or high likelihood of seeing their jobs affected by automation. We used to think of automation as a factor only when it comes to the most rote, repetitive jobs — but those days are over. Today more and more sophisticated, complex work is on the table, as machine learning removes the need for every task to be easily described in programming code. And while automation doesn’t necessarily wipe out individual jobs, it can still erode human employment. Even if your job isn’t entirely eliminated, you could still find yourself losing parts of it as machines take on specific aspects of the work we do.”[2]

Journalist Jonathan Vanian (@JonathanVanian) notes that it’s not just factory jobs at risk. “Forced to tighten their belts financially by the coronavirus pandemic,” he writes, “businesses are increasingly using software that automates back-office tasks. … Although the technology, called robotic process automation, or RPA, has existed for years, recent advances in machine learning and natural language processing have made it possible for it to do more complicated tasks. That includes deciphering financial jargon in PDF documents, analyzing that data, and then using it to fill in information in spreadsheets, which is helpful for cataloging invoices, among other tasks.”[3] Vanian observes, “The job-killing aspect of RPA is a sensitive topic. Rather than eliminating jobs, companies that sell the technology prefer to say that it lets customers shift their workers to more creative and higher-paying roles.” Vanian is apparently a skeptic that cobots and RPA will only relieve people of onerous tasks and not eliminate their jobs. Journalist Kevin Casey (@kevinrcasey) is a bit more optimistic. He writes, “Robotic Process Automation should be a positive — a chance to reduce drudge work. But when some people hear RPA, they think job loss.”[4]

What does the future hold?

“As our lives pass day by day,” write Peter Xing (@peterxing), Associate Director of Technology, Markets, and Growth at KPMG Australia, and Benjamin Rosman (@BenjaminRosman), Associate Professor of Machine Learning and Robotics, University of the Witwatersrand, “the beating drums of the weekly routine take over and years pass until we reach our goal of retirement. … We repeat the routine so that we can pay our bills, set our kids up for success, and provide for our families. And after a while, we start to forget what we would do with our lives if we didn’t have to go back to work.”[5] They insist most people are really disengaged from their work. They add, “Technologies like artificial intelligence and automation may help relieve the work burdens of millions of people — but to benefit from their impact, we need to start changing our social structures and the way we think about work now.” Even though workers may not be excited about work, they are likely to be even less excited about being out of work due to automation.

Xing and Rosman explain, “The driving goal behind much of this automation has always been productivity and hence, profits: technology that can act as a multiplier on what a single human can achieve in a day is of huge value to any company. Powered by this strong financial incentive, the quest for automation is growing ever more pervasive. But if automation accelerates or even continues at its current pace and there aren’t strong social safety nets in place to catch the people who are negatively impacted (such as by losing their jobs), there could be a host of knock-on effects, including more concentrated wealth among a shrinking elite, more strain on government social support, an increase in depression and drug dependence, and even violent social unrest.” Avoiding the dark picture they paint should be a priority for all stakeholders. According to Xing and Rosman, “Changing this system is a monumental task. This comes with two primary challenges: providing people without jobs with financial security, and ensuring they maintain a sense of their human value and worth.” Their prescription for the future isn’t about protecting jobs but forging a new society based on universal basic income, universal healthcare, and universal education. They fail to detail how they would pay for this new society. They go to note, “One of the greatest challenges in a departure from work is for people to find value elsewhere in life. Many people view their identities as being inextricably tied to their jobs, and life without a job is therefore a threat to one’s sense of existence.”

There are lots of reasons people want and need jobs. Although I don’t know what the future will bring, I do know a future without jobs isn’t something to desire. Xing and Rosman conclude, “This impending paradigm shift could be a threat to the stability of our fragile system, but only if it is not fully anticipated. If we prepare for it appropriately, it could instead be the key not just to our survival, but to a better future for all.” I agree we need to prepare for the future; however, that future should be based on jobs sustainability.

Footnotes
[1] Greg Ip and Angus Loten, “Most Businesses Were Unprepared for Covid-19. Domino’s Delivered.” The Wall Street Journal, 4 September 2020.
[2] Laird Cronk and Sussanne Skidmore, “Think a Robot Couldn’t Take Your Job? Think Again,” The Tyee, 7 September 2020.
[3] Jonathan Vanian, “The pandemic is speeding up automation, putting jobs in question,” Fortune, 11 August 2020.
[4] Kevin Casey, “How to tame Robotic Process Automation (RPA) anxiety,” The Enterprisers Project, 16 March 2020.
[5] Peter Xing and Benjamin Rosman, “The Global Work Crisis: Automation, the Case Against Jobs, and What to Do About It,” SingularityHub, 6 August 2020.