BusinessWeek magazine recently published an “Emerging Market Report” that claims “historic bonds between the Middle East and Asia are being revitalized in a torrent of trade and investment in energy, infrastructure, and manufacturing” [“The New Silk Road,” 18 November 2008 print edition]. This should come as no surprise to anyone who has watched the development of the global economy. Even with oil prices hovering around $55/barrel, the national coffers of oil producing nations continue to fill and they are looking east to Asia (rather than to the West) for answers to the current recession. In effect, the article claims that the old silk road is being revitalized — sort of. The article included the image below, which shows the old and new trade routes between the Middle East and Asia. 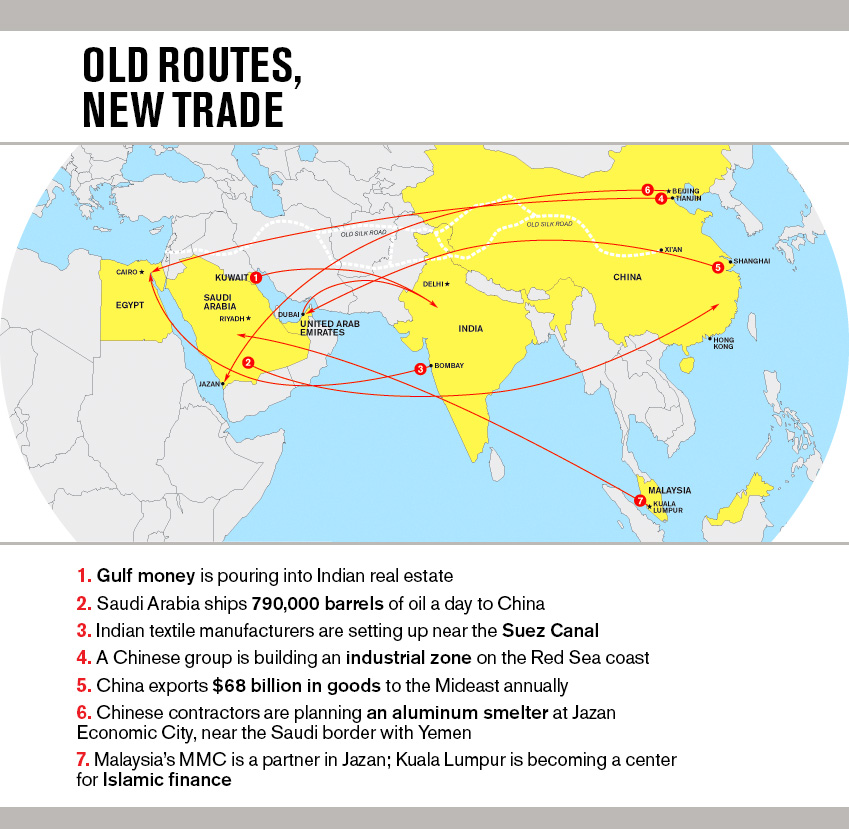 The links between Persian Gulf states and China are particularly strong since they involve trading natural resources for manufactured goods. But as the map shows, there are other connections as well.

“The Arab world and Asia have a legacy of trade ties dating back to caravans that transported textiles and spices across the desert on the so-called Silk Road and to Gulf traders that sailed the blue waters of the Indian Ocean in chunky ships known as dhows. Today a new Silk Road leads from the busy ports of Shanghai, Hong Kong, and Singapore to the Persian Gulf—and from sparkling airport lounges in Dubai and Riyadh back to Asia’s bustling cities. The merchants on this new route are Arab investors looking for smart places to park their petrodollars and Asians seeking to lock up energy supplies and find markets for the goods churned out by their factories. Trade between the two regions has been expanding at a 30% annual clip. Since 2006, Asia has been the largest trading partner of the Gulf Cooperation Council, a group of six wealthy Arab countries, according to data compiled by Standard Chartered Bank. As of last year, Asia accounted for 55% of the GCC’s total trade of $758 billion, the bank says. The mainstay of Gulf exports to Asia is oil, but some energy-intensive manufactured goods such as aluminum are also joining the mix. In return, China and Japan send to the Gulf products ranging from cars to computers while India and other Asian countries supply much of the food consumed in the Middle East. And while the scale of investment lags the trading ties, investors from the Gulf are buying stakes in everything from Asian banks and department stores to hotels and office buildings. Standard Chartered estimates that the Gulf countries invested $60 billion in Asia from 2002 to 2006.”

As I noted in my post entitled State Capitalism and Sovereign-Wealth Funds, even in down times growing petrodollar funds need to find places in which to invest. With the greatest potential for growth found in emerging market countries, it’s natural that such funds should look there for opportunities.

“It’s easy to find evidence of the growing links. Delhi newspapers advertise homes built by Emaar Properties, a Dubai developer. Smaller companies from Algeria, Egypt, Morocco, and elsewhere have factories in China to make shoes, toys, and the like. And so many Middle Eastern traders visit the wholesale markets in the southern Chinese town of Yiwu that road signs are posted in Arabic as well as Chinese and English. ‘Power is moving from West to East,’ [says Khaled Al-Muhairy, a 36-year-old native of Abu Dhabi who set up his own asset management firm, Evolvence, in Delhi, India]. ‘It is a huge opportunity.’ The Asians are getting a foothold in the Middle East, too. China has plowed billions of dollars into North Africa’s oil sector, especially in Sudan and Algeria. Along with the energy investment comes work for Chinese companies building roads, pipelines, and other infrastructure. Goods from Chinese appliance manufacturer Haier and electronics maker TCL are available across the Middle East. Indian engineering outfits Larsen & Toubro, Voltas, and others help out on real estate and industrial projects in the Arab world. And Malaysian developer MMC is working on a vast new city in Saudi Arabia. ‘We are seeing serious investment flows from Asia to the Middle East, says Rachid Mohamed Rachid, Egypt’s trade & industry minister.”

The article goes on to explain why the silk road is being revitalized. One of the reasons, as noted above, is that each region has something the other wants — so trade makes sense. Another reason is that Western markets are mosty saturated, which means that the best opportunities are going to be found in emerging markets. Another reason is that America and Europe have made many Arabs feel unwelcomed since the September 11, 2001, terrorist attacks.

“Many Arabs who might once have gone to the U.S. or Europe for education, medical care, or vacation are instead choosing Asia—and taking their business interests with them. ‘All the traditional and fundamental links [with the West] are being replicated and taken over by Asia,’ says Rachid.”

The article admits that the current financial crisis is going to have a dampening effect on trade between the Middle East and Asia, but it predicts the overall trend of increased connectivity will continue.

“The global credit crunch will doubtless affect the trend. Stock markets across both regions have plummeted, slashing the value of investments. With oil prices down, Arab countries will have less money to invest; governments may use their cash to prop up domestic economies and possibly bail out banks and developers. But the West is suffering, too, so there’s little reason to believe the economic integration of the Middle East and Asia won’t continue.”

One doesn’t have to look too far into the distant pass, the article notes, to discover close ties between Gulf states and Asia. Those ties were weakened with when the West’s post-Second World War economies started to thrive. “The oil boom led to closer ties with the U.S. and Europe,” the article notes, “and most Arabs forgot about India, China, and the rest of Asia, preferring to invest in the West.” It goes on to discuss one of the companies in the region with which Enterra Solution’s works closely.

“[Tarek Sultan] is CEO of Agility, a Kuwaiti logistics and warehousing outfit with $6.2 billion in annual revenues. Agility has made a bundle supplying the U.S. military in Iraq. Now it’s plowing nearly $2 billion into millions of feet of warehouse space and other trade infrastructure in Asia, building up a network of 70 offices and 20,000 employees in China and India. Agility even deployed a dozen trucks and 100 workers to handle dirty laundry for athletes at this summer’s Beijing Olympics. ‘Everybody knows about China and the U.S.,’ says the 44-year-old Sultan. ‘We are making investments in the trade that takes place within Asia.'”

Agility is one of the leaders in helping make connections both within and between emerging market countries. As the article points out, connections are being made everywhere.

“On the ground in the Gulf, connections with Asia are visible everywhere. Asian laborers are the muscle that builds skyscrapers, airports, and petrochemical plants. Asians also provide much of the brains and managerial talent at businesses ranging from investment banks to retailers, and people whose parents or grandparents originally came from the Indian subcontinent form the backbone of the middle class in Dubai and Abu Dhabi. The souks along the Creek, the salt inlet that was Dubai’s original harbor, are dotted with hole-in-the-wall Hindu temples, and it’s rare to spot anyone in Arab dress among the crowds piling into abras, the rough wooden water taxis that shuttle across the luminous green water.”

The article goes on to make another important point — connections must be in place before investments begin to flow. I am a proponent of connectivity because it enables so many good things to happen, including investment. I’ve stressed in my posts about Development-in-a-Box™ that development doesn’t really progress until foreign direct investments are made in a developing country. The article stresses that investment flows have been small to date, but BusinessWeek expects that to change.

“So far, investment flows haven’t kept up with trade ties, but that’s likely to change. To date, only about 11% of foreign direct investment from the Gulf has gone to Asia. But by 2020 that could nearly double, to 20%, while the share of Middle Eastern money flowing West will fall to about half the total, from three-quarters today, consultancy McKinsey estimates. Even with lower prices for crude, the Gulf countries will have lots of financial firepower. If oil averages $50 per barrel, McKinsey figures, the Gulf will earn $4.7 trillion through 2020. Middle Eastern sovereign wealth funds are already pouring money into Asia. The largest—the Abu Dhabi Investment Authority—aims to have 8% to 12% of its estimated $500 billion-plus fund invested in emerging market stocks, with Asia a key destination. Other big investors include Dubai Financial Group and Dubai International Capital, controlled by the emirate’s ruler. But a lot of recent investments in Asia have taken a whack. Dubai International Capital, for instance, bought 3% of India’s ICICI bank for more than $700 million in July 2007. Since then, ICICI’s shares have fallen 53%.”

One of the challenges of doing business in emerging market countries is that the business environment in many of them is radically different than business environments found in most developed countries. As the article states, “For Asian and Middle Eastern investors, negotiating the written and unwritten rules of each others’ business environments isn’t easy.” That is one of the reasons that we stress internationally-accepted standards and best practices as part of Development-in-a-Box. For their part, emerging market entrepreneurs are finding Arab investors and investment groups frustrating because they only want to invest in large projects. As Asian countries become more wealthy, Middle Eastern countries are trying to attract investment money back into the region — especially the less well-off Middle Eastern countries.

“While oil-exporting nations want to lock up markets for their crude, Egypt and other Arab states are pushing Asian countries for investment that creates jobs. China’s exports to Egypt have more than quadrupled since 2003, to $4.7 billion in 2007—roughly 18 times the value of Egyptian exports to China. The Egyptians want China to compensate by manufacturing in Egypt. ‘We are trying to make Egypt a hub for China to export from,’ says Ahmed El Sewedy, chief executive of Cairo-based El Sewedy Cables and head of the Egyptian-China Chamber of Commerce.”

Serious trade imbalances remind many people in emerging market countries of the colonial period and they aren’t willing to settle for that kind of relationship. This is not the first time the Chinese have been stung with criticism about trade imbalances and they are trying to placate at least some of the critics.

“Drive about an hour northeast of Cairo, and you’ll see evidence that the Egyptian arm-twisting may be working. In a secluded stretch of desert near the mouth of the Suez Canal, TEDA—one of China’s biggest development agencies, based in the northern port city of Tianjin—is carving out a manufacturing zone. The aim is to attract some 50 Chinese-owned factories that would employ 10,000 Egyptians and 1,000 Chinese. Seven companies are already operating in the area, including a Chinese/Egyptian venture that assembles oil drilling rigs and another that makes disposable garments for hospitals and restaurants. Liu Aimin, general manager of Egypt-TEDA Investment, the company that’s developing the zone, ticks off Egypt’s attractions for Chinese companies: cheap labor, trade agreements that ease entry of goods into the U.S., Europe, and Arab countries, and a location ‘at the crossroads of Asia, Africa, and Europe, facing 1 billion customers.'”

The new silk road is likely to operate as long as the old one did. It’s a virtual road that connects wealth, resources, and opportunities. Companies that want to get in front of the money are going to have to travel that road and the sooner they get on it the better.