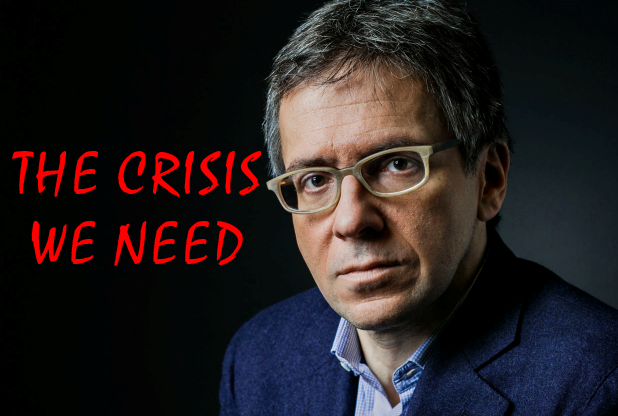 The Need to be Resilient as Nations, Companies, and Individuals

Ian Bremmer Insists We Need a New Crisis: Are You Ready?

How you look at the world depends on whether you are an optimist or a pessimist, an idealist or a realist. I like to think of myself as an optimistic realist. People like me hope for the best, but plan for the worse. Realists know that crises are like London buses, the next one is just down the road. Smart leaders continually plan for the next crisis, even when they are dealing with a current one. Ian Bremmer (@ianbremmer), founder of Eurasia Group, is a realist with a great track record of predicting geopolitical events. Journalist Leslie P. Norton (@lesliebarrons) points out, “[Bremmer’s] top risks for 2020, issued in early January — that many would view the U.S. election as rigged and that China and the U.S. decoupling in technology would provoke clashes over Hong Kong and a host of other issues — have come to pass.”[1] In a forthcoming book, The Crisis We Need, Bremmer argues the world actually needs a new crisis. When Norton asked him if the coronavirus pandemic was that crisis, he answered:

“It’s not. We are very far today from [the 2008 crisis], when we had a rally around the flag in the U.S., and all of our allies were aligned with us, and the G20 [grew in stature], and even China recognized that we all needed to work together. Now, our country is more divided than at any time in my lifetime. The geopolitics of the global order are more divided than at any point since the Soviet collapse, and the gap between poor and wealthy, both in the advanced industrial and in poor countries in the world, is growing. That’s all on the back of coronavirus. Our global architecture and leaders are inadequate to put the world on a more sustainable path. Climate change is coming real soon to a theater near you.“

Faced with a panoply of problems and a deficit of leadership worldwide, Bremmer is predicting a forthcoming global depression.

David Rodeck (@davidrodeck), a financial writer, notes, “Recessions and depressions have similar causes, but the overall impact of a depression is much, much worse. There are greater job losses, higher unemployment and steeper declines in GDP. Most of all, a depression lasts longer — years, not months — and it takes more time for the economy to recover.”[2] He goes on to list some of the things that can cause a depression. They include:

A sudden economic shock: “An economic shock is a surprise problem that creates serious financial damage. In the 1970s, OPEC cut off the supply of oil to the U.S. without warning, causing a recession, not to mention endless lines at gas stations. The coronavirus outbreak, which shut down economies worldwide, is a more recent example of a sudden economic shock.”

Excessive debt: “When individuals or businesses take on too much debt, the cost of servicing the debt can grow to the point where they can’t pay their bills. Growing debt defaults and bankruptcies then capsize the economy. The housing bubble in the mid-aughts that led to the Great Recession is a prime example of excessive debt causing a recession.”

Asset bubbles: “When investing decisions are driven by emotion, bad economic outcomes aren’t far behind. Investors can become too optimistic during a strong economy. Former Fed Chair Alan Greenspan famously referred to this tendency as ‘irrational exuberance,’ in describing the outsized gains in the stock market in the late 1990s. Irrational exuberance inflates stock market or real estate bubbles — and when the bubbles pop, panic selling can crash the market.”

Too much deflation: “While runaway inflation can create a recession, deflation can be even worse. Deflation is when prices decline over time, which causes wages to contract, which further depresses prices. When a deflationary feedback loop gets out of hand, people and business stop spending, which undermines the economy. Central banks and economists have few tools to fix the underlying problems that cause deflation. Japan’s struggles with deflation throughout most of the 1990s caused a severe recession.”

Technological change: “New inventions increase productivity and help the economy over the long term, but there can be short-term periods of adjustment to technological breakthroughs. In the 19th century, there were waves of labor-saving technological improvements. The Industrial Revolution made entire professions obsolete, sparking recessions and hard times. Today, some economists worry that AI and robots could cause recessions by eliminating whole categories of jobs.”

Bremmer sees the latter cause — technological change — as the most likely trigger for his predicted depression. He explains, “This crisis is transformative, with a technological displacement that will be great and permanent for wide swaths of the population. I am not someone who despairs, because I see just how much innovation there is. The companies being hit are the least innovative. Imagine that instead of a [health] crisis we were hit by a cyberattack of the same scale; that would have hurt most of the digital economy, the virtual economy, our trust in our data, all of that. I would feel so much more pessimistic then. That would have strengthened all these entrenched interests that are most aligned with the 20th century — which is a bad place to be. And it would have made me more pessimistic about urban centers in poor countries that desperately need to get wired, and fast. Instead, they’re being pushed ahead, radically.” Fortunately, he doesn’t see his predicted depression being as bad as the Great Depression of the 1920s and 1930s.

If technological change were not enough to deal with, Bremmer points out the world has to face the worsening relationship between the world’s two largest economies and the specter of climate change. He notes, “On pretty much every front, the relations between the two largest economies in the world are getting worse.” Regarding climate change, he is a bit more optimistic. He explains, “We are closer to responding effectively to it. A couple of things make me more optimistic. First, although there still is a partisan divide among older Americans, when you get to your under-35 set, everyone across the board, left and right, says climate change is a really big deal. That’s a big change. Second, the Germans. Angela Merkel is leaving in 2021 but has completely reinvigorated her legacy through effective response to this pandemic, not just in Germany, but also in Europe as a whole. The massive relief that she has engineered for the Europeans, redistributing wealth in Europe, is very Green, and is being linked to new regulatory policy that’s very Green. And that’s the world’s largest common market. Third, while the crisis is hurting the real economy, it’s helping the digital economy. That’s driving what will more quickly move us away from fossil fuels. We’re not there yet. You still need U.S./Indian/Chinese cooperation to really respond to climate change. And the U.S.-China relationship is only getting worse. The problems we have created over generations are baked in, literally, for the next 10 or 20 years. It will get worse before it gets better. But at the margins, I am getting more optimistic that we are making progress.”

The Economist is not quite so sanguine. The magazine notes, “Businesses have always had to adapt to a changing environment. But climate change is making this far harder. As weather conditions worsen, some companies are responding. But it is impossible to mitigate all the risks. For many firms, the physical impact of climate change will affect them more through disaster-struck suppliers or inundated transport routes than in their own operations.”[3] After noting many of the negative effects climate change is producing, the Economist concludes, “The physical effects of such changes will hurt the world economy, though precisely how much is hard to predict. Most estimates have hefty error margins and forecasts that stretch vaguely to the end of the century. Some analysis of the costs to businesses are more convincing than others, partly because time horizons are shorter.”

All of the challenges noted above cry out for effective global leadership. Bremmer doesn’t see any great leaders now or on the horizon. Chris Patten (@uk_patten), chancellor of Oxford University and a former chairman of the UK Conservative Party, writes, “The first task of democratic leadership today is to teach our electorates once again that we require to work with others in order to deal with most of the difficult issues we face — from infectious diseases to illegal arms trade, from drug smuggling to the proliferation of nuclear weapons, from mass migration to the assaults on our environment.”[4] He asserts it will take leaders with courage and vision to mark a path others have feared to tread. He concludes, “We know from this experience the truth of the old Spanish proverb, which the early 20th century poet Antonio Machado made famous in a great poem: ‘Caminante, no hay camino, se hace camino al andar’. ‘Traveler, there is no way. The way is made by walking’. That is what leaders do. They walk. They walk ahead of us, sometimes into the dangerous unknown. They walk and they make the road for the rest of us to tread following in their footsteps.” We can only hope such leaders emerge to help us through the travails predicted by Bremmer.