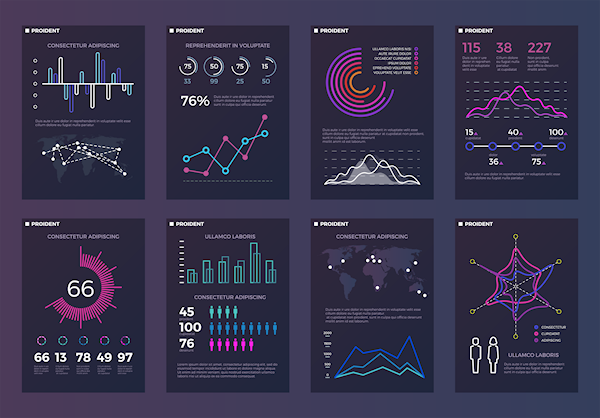 The Importance of Data Visualization

During the early weeks of the novel coronavirus outbreak, New York Governor Andrew Cuomo (@NYGovCuomo) became a media star as a result of his daily, informative briefings. Pentagram partner and information designer Giorgia Lupi (@giorgialupi) was one of the millions of interested viewers who tuned in to Cuomo’s daily briefing. Lilly Smith (@lilly_smith48) reports, “Lupi and her team had been watching Cuomo’s daily briefings and were encouraged by the starring role they gave to charts and tables. But as an information designer, Lupi also saw opportunities to make the charts even better — more data-rich, allowing for uncertainty, and adding more context, nuance, and humanity. … Lupi says, the exercise isn’t about replacing Cuomo’s charts, but about finding ways to layer in new changes that amplify what he is saying.”[1] There is an important lesson to be learned here. Amidst all the talk about the value of big data in business, there isn’t enough discussion about how analyzed data is visualized. As Lupi noted with Cuomo’s briefings, there is a way to make data come to life and make it more meaningful for users. Analysts at SAS note, “Data visualization is the presentation of data in a pictorial or graphical format. It enables decision makers to see analytics presented visually, so they can grasp difficult concepts or identify new patterns. With interactive visualization, you can take the concept a step further by using technology to drill down into charts and graphs for more detail, interactively changing what data you see and how it’s processed.”[2]

The importance of visualization

The SAS staff reports, “The concept of using pictures to understand data has been around for centuries, from maps and graphs in the 17th century to the invention of the pie chart in the early 1800s. … It’s technology, however, that truly lit the fire under data visualization. Computers made it possible to process large amounts of data at lightning-fast speeds. Today, data visualization has become a rapidly evolving blend of science and art that is certain to change the corporate landscape over the next few years.” They go on to note, “Because of the way the human brain processes information, using charts or graphs to visualize large amounts of complex data is easier than poring over spreadsheets or reports. … Data visualization can also: Identify areas that need attention or improvement; clarify which factors influence customer behavior; help you understand which products to place where; [and] predict sales volumes.”

In a separate article, SAS analysts note, “Data visualization is one of the most important tools in the arsenal of any data analyst. It helps to provide stakeholders and other team members with quality information by transforming massive amounts of intangible data into easily understandable pictures and graphics. … Knowing all about data mining is useless if you’re not able to present the information you extracted in a clear and understandable way. Not every person in an organization is able to process data unless the information is digested and graphically displayed as a dashboard, graph, or map. Data visualization is a necessary skill used for converting data into actionable visual representations.”[3] Using a mixed metaphor, they write, “We are drowning in information, but starving for knowledge.” They could just as well have stated, we are drowning in data, but thirsting for insights.

According to a 2019 report from information services company Experian, writes Amy Balliet (@AmyBalliett), co-founder and CEO of Killer Visual Strategies, “There are few topics in the world of business management and growth that see near-unanimous agreement. But when it comes to the power of data, a stunning 99 percent of businesses agree that data-driven decision-making provides them with a competitive advantage. That’s an impressive testament to the power of data. But that power is limited when it’s not accompanied by strong data visualization.”[3] She goes to suggest five ways data visualization can help an organization. They are:

1. Recognizing patterns and trends. Balliett writes, “A spreadsheet of raw data just doesn’t cut it if you’re looking for real insights. That’s where graphs, charts, maps, and other types of data viz can help. When your data is visualized accurately and thoughtfully, you’ll no doubt begin to notice trends and patterns instantly.”

2. Asking the right questions. Over the years, I have repeatedly argued better questions result in better analysis. Balliett asserts once insights, trends, and patterns are visually apparent, “you’re better equipped to ask the kinds of questions that will make a real difference for the future of your business — questions that the most adept business leaders ask on a daily basis. But they wouldn’t even know what questions to ask without powerful data visualization to point them in the right direction.”

3. Making better plans for the future. Good questions lead to good plans. Balliett writes, “Now that you’re asking the right questions, you’re empowered to make data-driven decisions about the growth and direction of your business.” Every business leader knows the importance of making good decisions. As Bain analysts, Michael C. Mankins and Lori Sherer (@lorisherer), explain, “The best way to understand any company’s operations is to view them as a series of decisions. … We know from extensive research that decisions matter — a lot. Companies that make better decisions, make them faster and execute them more effectively than rivals nearly always turn in better financial performance. Not surprisingly, companies that employ advanced analytics to improve decision making and execution have the results to show for it.”[4]

4. Improving customer experience. Balliett notes, “The Experian report found that an impressive 98 percent of those surveyed agreed that data helps them better the customer experience. … Data about customer demand and behavior — including what they look for in a product like yours, and how they use your product when they buy it — can be incredibly powerful. It helps you recognize where you’re succeeding and where you can do more. It allows you to give your past and future customers exactly what they’re looking for.”

5. Earning your audience’s trust. A nineteenth century aphorism often incorrectly attributed to British Prime Minister Benjamin Disraeli is, “There are three kinds of lies: lies, damned lies, and statistics.” The point is, gaining trust, even with data, is not always an easy thing to do. Balliett writes, “Sharing data that supports your claims makes them all the more powerful. And in the process, it builds trust with customers and potential customers. That’s because it makes your company look more transparent and proves that your claims are evidence-based.”

The right data visualization will not only strongly underscore your message but ensure your audience that the numbers are sound. The importance of trust in business can’t be over-emphasized. Although the following video from Egencia focuses on travel, it makes some excellent points about how data visualization can help data come to life.

Margaret Rouse (@WhatIsDotCom) concludes, “The increased popularity of big data and data analysis projects have made visualization more important than ever. Companies are increasingly using machine learning to gather massive amounts of data that can be difficult and slow to sort through, comprehend and explain. Visualization offers a means to speed this up and present information to business owners and stakeholders in ways they can understand.”[5]