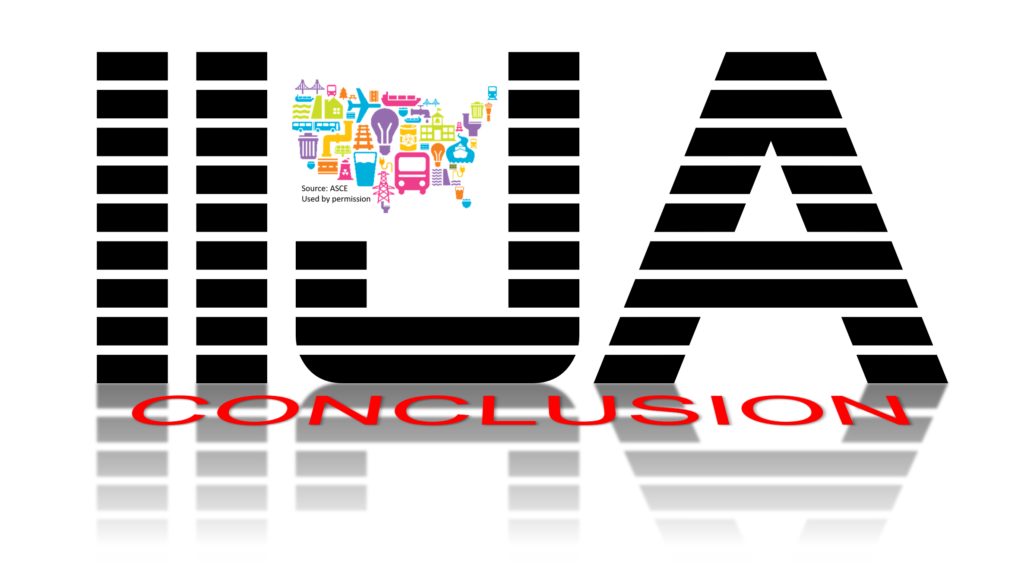 Shortly after President Joe Biden signed the Infrastructure Investment and Jobs Act (IIJA), supply chain journalist Alejandra Salgado (@alejandrasalpan) reported, “Trade associations wasted no time touting the benefits the new law is expected to bring.”[1] Despite all the political bickering, reaction to increased infrastructure spending has been mostly positive. Political commentator Fareed Zakaria (@FareedZakaria) explains why most experts believe IIJA is good for America. He writes, “Economists disagree on exactly how much growth is produced by infrastructure spending. But if we take a longer and broader view, the payoff seems obvious. Felix Rohatyn, the banker who rescued New York City from bankruptcy, wrote ‘Bold Endeavors,’ a book that shows how, over 150 years, federal investments created the American economic system — from the Erie Canal to the first transcontinental railroad to rural electrification to the interstate highways.”[2]

Zakaria goes on to argue that among the economic advantages enjoyed by the United States over its history, one stands out: “America has the world’s largest and most easily accessible consumer market in the world.” This access is the direct result of previous infrastructure investments. Zakaria points to a book written by Peter Zeihan entitled “The Accidental Superpower” that helps explain America’s infrastructure advantage. Zakaria writes, “As [Zeihan] notes, the United States has 17,600 miles of navigable waterways, the world’s largest network by far. (China and Germany have 2,000 miles each.) Those waterways feed into a series of massive deep-water ports. Some of the largest natural harbors are Puget Sound, San Francisco Bay and the Chesapeake Bay. The latter has ‘longer stretches of prime port property than the entire continental coast of Asia from Vladivostok to Lahore.'” Until the passage of the IIJA, Zakaria asserts, “This massive advantage has been eroding for decades as waterways, railroads and ports have all faced increased traffic and insufficient investment.” Renewed attentions to infrastructure has revived industry optimism.

Industry Reaction to the IIJA

Ian Jefferies, AAR President and CEO. “Today, the nation took a long overdue step toward a more competitive, prosperous economic future with President Biden’s signing of the comprehensive infrastructure package. Prioritizing investments and commonsense policy solutions were the results of thoughtful, bipartisan negotiations and the tireless work of many. As we collectively face today’s challenges and build tomorrow’s opportunities, this package will help pave the way for a more modern, safer and resilient infrastructure network.”[3]

Chris Conner, AAPA President and CEO. “This bipartisan bill is a benchmark in American infrastructure policy. The goods that flow through our ports touch every state, every Congressional district, every neighborhood, every home in our country. Our ports move the economic blood in our veins.”[4]

Chris Spear, ATA President and CEO. “Roads and bridges are not political — we all drive on them. A majority in the House and Senate realized this truth and did what’s right for the country, not themselves. From farmers to truckers, the millions of hard-working people who make this country great won today. Those lawmakers who put their constituents before themselves have now cemented a lasting legacy that the American people will see, feel, and use for many decades to come.”[5]

Matthew Shay, NRF President and CEO. “Retailers rely on the American infrastructure system to move billions of dollars’ worth of merchandise to communities across the country and around the globe every day. A healthy and efficient transportation system is vital to the success of thousands of retail businesses. This substantial influx of investment in our roads, ports, bridges and other core infrastructure will further enable businesses to meet burgeoning consumer demand and promote economic growth. The prioritization of our nation’s fundamental transportation network will mitigate many of the supply chain challenges businesses are experiencing today and will pave the way for a 21st century infrastructure system that can withstand future disruptions.”[6]

Michael Hanson, RILA Senior Executive Vice President of Public Affairs. “The infrastructure bill is a much-needed, trillion-dollar boost to modernize our ports, roads, and highways, and as heavy users of our nation’s infrastructure, greatly welcomed by the retail industry. These public investments will create more efficient supply chains and allow retailers to innovate and invest in more effective and sustainable means to deliver goods to families across the country.”[7]

Jay Timmons, NAM President and CEO. “Now that this historic bill has become law, we can build a future worthy of the next generation. For manufacturers, this is a victory years in the making. In 2016, the NAM released our ‘Building to Win’ plan, which called for exactly this type of bold infrastructure investment. It has guided our advocacy with administrations and legislators of both parties, and the leadership of President Biden and senators from both parties produced a bill that achieved many of our ‘Building to Win’ goals without raising tax rates on manufacturers. And this bipartisan approach can be a model for future legislation — one that puts policy above politics, personality or process.”[8]

Geoff Freeman, CBA President and CEO. “Today’s passage reverses years of inaction and inattention in Washington that has worsened our current supply chain crisis. We applaud Congress for passing a comprehensive infrastructure bill that will help build supply chain resiliency in the future. This legislation is a monumental step forward, but it cannot solve the immediate supply chain crisis that is hampering the economy and driving increased costs for American families. With the looming potential of shortages of essential goods, we encourage Congress and the Biden administration to stay focused on what can be done to fix problems now.”[9]

Although the reaction to the IIJA has been mostly positive, analysts from the Brookings Institution bring us down to earth. They write, “Now the action shifts. Federal agencies like the Departments of Transportation and Energy have the enormous responsibility to implement the law, standing-up new programs and finding safe ways to quickly get money out the door. State and local officials carry an even greater burden. As the owners and operators of most infrastructure, they must design and build new assets, hire more workers, and even mobilize their own financial resources.”[10] They also suggest a little patience. “Most projects will not happen overnight,” they write. “The pace at which federal funds reach different places nationally depends on the types of projects pursued and the types of programs channeling resources to these projects. As we learned during the American Recovery and Reinvestment Act a decade ago, ‘state of good repair’ projects, such as resurfacing or improving roads, happen faster than more sophisticated capital projects, such as new system expansions.” ASCE calls the legislation a good down payment for investments that need to be made. Additional funding, however, will depend on how well all stakeholders use the money provided by IIJA to make infrastructure improvements an investment in the future.