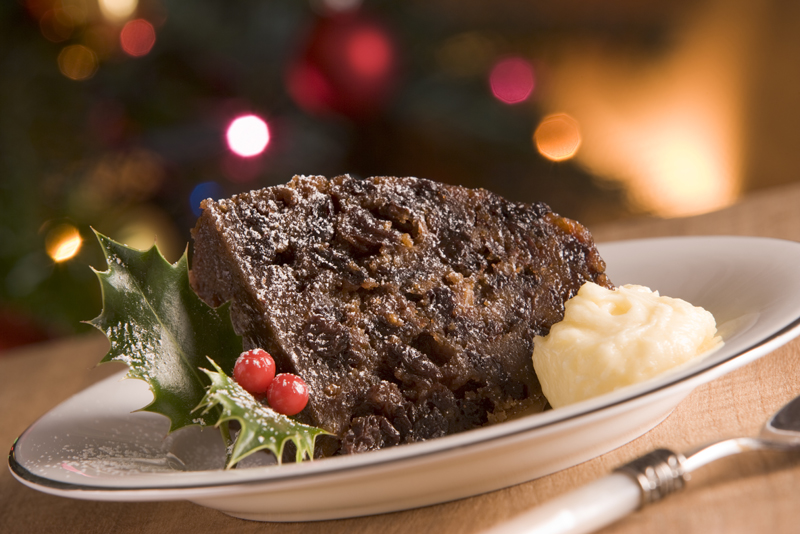 The Flavors of Christmas

Mel Torme’s “The Christmas Song” reminds us that “chestnuts roasting on an open fire” and “a turkey and some mistletoe … help to make the season bright.” Most people enjoy the holiday season because it invokes good feelings and fond memories. Holiday flavors and treats contribute to those memories and help make the season both tasty and bright. Regina Schrambling (@gastropoda), founder of gastropoda.com, isn’t fond of gifts, tinsel, trees, or carols, but she loves the flavors of the holidays. She writes, “My Christmas fantasy always involves dispensing with gifts, stopping the music and replanting all those doomed trees. But there’s no way I would pass up baking cookies with ginger, doctoring eggnog with brandy or indulging in any of the other tasteful aspects of the holiday. Beyond its more obvious meanings, after all, Christmas is really so much about flavor. At least a dozen fruits, spices and liquors are indelibly associated with it.”[1] Like so many holiday traditions practiced in America, Schrambling says the flavors of Christmas can be traced back to Victorian times. She explains:

“Some of the meaning is based on scarcity: Centuries before supermarkets, cooks had to ration their cinnamon and cloves for seriously special occasions. Some of it is rooted in decadence: The natural urge on a holiday that comes but once a year is to bring out the best ― the darkest chocolate, the most expensive spices. And some of it evolved from pure necessity: Spices and liquor also have preservative effects, which is about the only plausible explanation for the invention of the fruitcake. So much of taste is memory, though, and that’s what makes the flavors of Christmas so potent. Every culture has its own traditional signatures, such as cardamom and saffron in Sweden or ginger and nutmeg in England, while some flavors are almost universal, such as cinnamon and allspice. But every person has his or her own nostalgia trigger, one taste that symbolizes the season.“

The folks at Thanksgiving.com note, “Sometimes all a dreary December day needs to be transformed to a festive moment is a recipe with the nostalgia-inducing flavors of the holiday season.”[2] They add, “Peppermint candy canes are a traditional favorite, making their appearance in baked goods or dipped into hot drinks. The minty-fresh flavor of the iconic cane-shaped Christmas candies rarely disappoints. Ginger and other spices, such as cinnamon and cloves, are anticipated for their palate-warming qualities in drinks, baked goods and savory dishes. Few edible treats say happy holidays like giant ginger cookies or maple cinnamon star cookies.” Schrambling adds, “Orange may not be the most obvious flavor in cooking, but it has a special hold over me because my family only got the fruit at Christmas.” Apparently Schrambling’s family was not alone in eating oranges at Christmas. Jacqueline “Jackie” Mansky (@jasmansky) writes, “If you’re looking for a last-minute stocking stuffer that isn’t the typical corporate schlock, consider taking a page from history. You can eschew the mall madness in favor of sticking a humble orange in your Christmas hosiery. The orange became part of Christmastime tradition in the 19th century, in concert with the rise of hanging stockings near the fire. According to Emily Spivack, who wrote about the origin of the Christmas stocking for Smithsonian.com, the tradition of hanging holiday hosiery dates back to at least 1823, when it is mentioned in the classic poem ‘Account of a Visit from St. Nicholas,’ later known as ‘The Night Before Christmas,’ which notes that Santa Claus ‘fill’d all the stockings’ before exiting stage left via chimney.”[3] She adds, “Placing an orange in the toe of one of these Christmas stockings may have had something to do with the legend of the three balls (or bags or bars or coins) of gold that the Bishop of Myra, the real Saint Nicholas, gave to three poor maidens to use as dowries.” For more on that story, see my article entitled “The Man Who Inspired Gift-giving at Christmas.”

If you are looking for something a bit sweeter to put in those stockings, peppermint candy also has a long tradition. Jessi Devenyns reports, “Legend has it that the ancestor of the candy cane appeared in 1670 when the choirmaster at the Cologne Cathedral in Germany handed out white sugar sticks to his young singers to keep them quiet during the long mass.”[4] Candy shop owner Greg Cohen told Devenyns there’s little truth to that story. He reports, “The first mention we have about candy canes being associated with Christmas was in 1874. They started before that and they had nothing to do with Christmas. … Originally, they were just another form of hard candy. It wasn’t until centuries after the original bright white sugar sticks became popular that candy canes gained their hallmark peppermint flavoring and red stripes. In fact, 1904 is around the time when stripes became a familiar sight on candy canes.” Although candy canes are made of sugar and corn syrup and may not be the healthiest of snacks, Devenyns insists, “When it comes to candy canes, the combination of sugary sweetness and a dose of nostalgia is likely to keep these traditional treats on shelves for many years to come.” Cohen told her, “They bring back memories of years past and flavors that people don’t even know they’re missing. And they just put a smile on your face.”

Stew Miller (@StewWriter) writes, “If there is one thing about Christmas everyone can agree on, it’s the fact that the season has a number of its own, distinct flavors. These flavors don’t often appear any other time of year and are reserved for when the Thanksgiving bloat dies down and the Yule gluttony fires up. The Holiday lover in all of us looks so forward to these special favors that we almost forget the stop and really recognize just how important they actually are.”[5] Among the flavors he singles out are:

He also mentions a couple of scents worth noting:

Why throw in a couple of scents? Because flavor and aroma are traveling companions. Schrambling explains, “Always, with the flavors of Christmas, the wonder is in the fragrance as much as the taste. One of my favorite indulgences is baking something liberally spiced late at night so that the whole apartment is perfumed for hours. As even I’ll concede, when you go to bed with ginger, you wake up cheerful.” On this Christmas Eve, I hope your home is filled with the flavors and scents of Christmas.