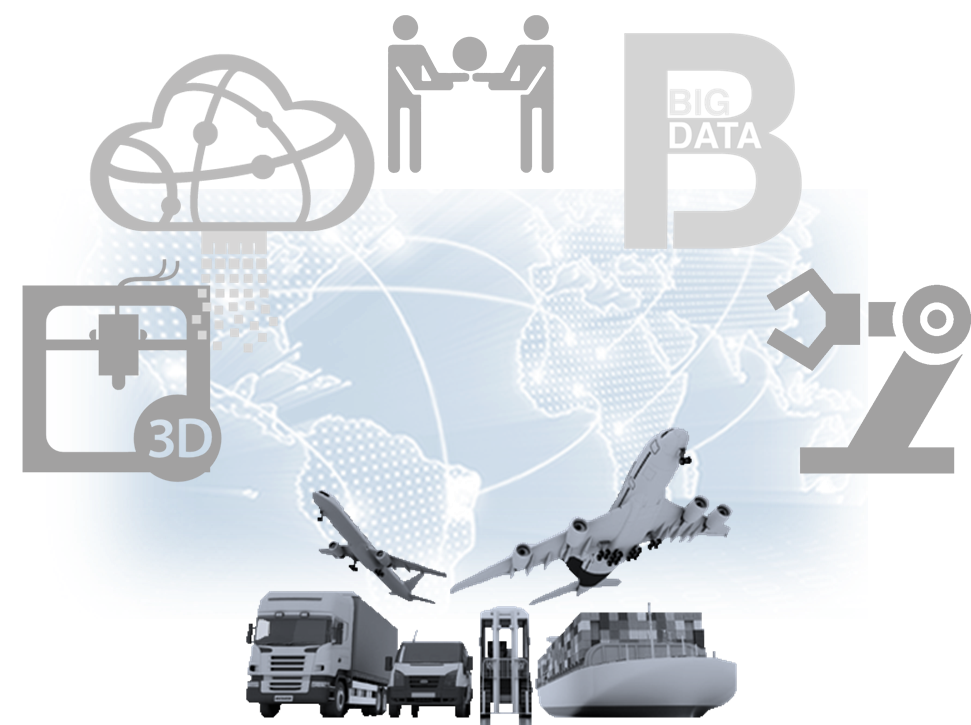 Technology Will Continue to Transform the Supply Chain

“The technological shifts over the next 10 years and beyond will reverberate through all aspects of business, government and society overall,” writes Christian Lanng (@christianlanng), Chairman and Chief Executive Officer of Tradeshift.com.[1] The supply chain is one of those “aspects of business” he insists will be affected and he identifies five “shifts” that he believes are poised to impact supply chains. I have addressed all of these technological shifts in previous articles; but, Lanng believes we have only begun to feel the impacts these shifts will have on the supply chain. Those shifts are: The sharing economy; the Internet of Things (IoT), additive manufacturing (i.e., 3D printing), big data decision making, and robotics. Susan Fourtané (@SusanFourtane) sees another shift she believes will transform the supply chain just as dramatically as the technological shifts discussed by Lanng. Fourtané calls that shift Supply Chain Execution Convergence (SCEC).[2]

Chances are that some, but not necessarily all, of the shifts mentioned above are going to affect every business in the years ahead. Like other evolutionary processes, organizations that can adapt to the changing environment are going to be the ones that survive and thrive. So let’s look at the shifts that Lanng and Fourtané predict are coming and briefly discuss how organizations might need to adapt to them.

“Many executives are asking themselves if their industries are next to be ‘uberized’,” writes Lanng, “an homage to Uber, the car-sharing service and poster child of the model.” Another poster child for the sharing economy is Airbnb. Lanng explains why these are models that are going to affect the supply chain. He writes:

“For a direct application of the sharing economy to supply chains, look no further than Uber’s sights on becoming a real-time logistics network; they have recently launched parcel services in Hong Kong (Uber Cargo) and New York City (Uber Rush). You can also find the principles of the sharing economy in redistribution markets and in industries where on demand, pay as you go makes sense, such as high­-tech service and support. For example, many high-­tech equipment manufacturers no longer sell their wares to customers, but rather lease the output of the equipment as service.”

The sharing economy is a close relative of another concept — the circular economy. What, you may ask, is a circular economy? According to the Ellen MacArthur Foundation, a leading proponent of the circular economy, “The circular economy refers to an industrial economy that is restorative by intention; aims to rely on renewable energy; minimizes, tracks, and hopefully eliminates the use of toxic chemicals; and eradicates waste through careful design.” Its connection to the sharing economy is that almost everything in a circular economy remains the responsibility of the manufacturer from production to disposal. Creating a circular economy won’t be easy. It will disrupt current manufacturing practices, will complicate supply chains, and will require a cultural shift in consumer habits. A report published by the World Economic Forum (WEF) concludes, “The full potential value of the circular economy goes well beyond simply recycling used materials — whether down- or upcycling them. This value is embedded in the reuse, maintenance, refurbishment, and remanufacturing of components and products, so it is equally important to strengthen these reverse setups and capabilities. Companies have mastered the orchestration of complex, multi-tier inbound supplier networks. Now the same sophistication needs to be applied to orchestrating post-usage value streams across multiple reverse cycle partners.”[3]

The Internet of Things

Lanng writes, “According to the World Economic Forum, by 2022, 1 trillion sensors will be connected to the Internet. The torrent of data will require astronomical figures to describe. The Internet of things (IoT) will give supply chain professionals greater visibility, accuracy and pinpoint identification of potential issues throughout supply chain processes.” Mark Jaffe, CEO of Prelert, agrees with Lanng that the IoT is going to change the business landscape in dramatic ways. “IoT will produce a treasure trove of big data,” he writes, “data that can help cities predict accidents and crimes, give doctors real-time insight into information from pacemakers or biochips, enable optimized productivity across industries through predictive maintenance on equipment and machinery, create truly smart homes with connected appliances and provide critical communication between self-driving cars. The possibilities that IoT brings to the table are endless.”[4] What Jaffe calls a “treasure trove of data” is going to be so enormous that the term “big data” is likely to fall into disuse because “big” won’t adequately describe it. There will so much data that humans will simply be incapable of dealing with it by themselves. Jaffe explains, “It’s simply impossible for humans to review and understand all of this data — and doing so with traditional methods, even if you cut down the sample size, simply takes too much time.” The answer, Jaffe says, is employing the power of artificial intelligence (AI), especially machine learning.

“3D-­printed machine parts are cool,” Lanng writes, “but nothing like what’s in store for the future.” He explains:

“In just seven years we can expect a fully functional 3D-printed car to be in production. No longer confined to research labs, 3D printing, or additive manufacturing, is in the hands of manufacturers and hobbyists alike. A typical consumer grade 3D printer costs $1,500. Someday, you may be able to create your own simple spare parts or objects like a smartphone case by downloading a 3D printing file. The implications of on­-demand production for the supply chain are huge, with positive environmental consequences in terms of reduction in transport, pollution and production waste. 3D printing can also reduce dependence on large factory employment, particularly in developing countries where resources may be scarce.”

An article published earlier this year noted, “3D printing is a rapidly advancing field that is sometimes referred to as the ‘new cornerstone of the manufacturing industry’.”[5] Matthew Timms adds, “Cited by some as ‘the next industrial revolution’, 3D printing is slowly reshaping the traditional supply chain, and could conceivably be the single most disruptive breakthrough since progressive assembly.”[6] There are still challenges to overcome — printing speed being the most obvious — but advancements are rapidly being made.

Bain analysts, Michael C. Mankins and Lori Sherer (@lorisherer), note that decision making is one of the most important aspects of any business. “The best way to understand any company’s operations,” they write, “is to view them as a series of decisions.”[7] Lanng adds, “In the next five years, we are expected to go from 4 billion to 30 billion Internet-­connected physical devices. This will significantly impact how supply chains operate. The data generated from legions of internal and external sources (such as the industrial IoT described above) will enable better and faster decision­ making in a wide range of industries and applications.” As Jaffe noted, however, faster decision making will only be achieved if artificial intelligence is employed. I believe that cognitive computing systems are going to be at the heart of most businesses that use artificial intelligence to help them make decisions better and faster. I’m not alone in that opinion. For more information on this subject, read my article entitled “Improving Business Decisions Using Cognitive Computing.” In Accenture’s latest technology vision entitled “From Digitally Disrupted to Digital Disrupter,” Accenture analysts state that cognitive computing will provide the “ultimate long-term solution” for many business challenges.

“It’s hard to believe,” Lanng writes, “but the world now includes 1.1 million working robots. Machines now account for 80% of the work in manufacturing a car. They’re on factory floors everywhere working alongside humans looking more and more like collaborative partners.” He continues:

“By 2018, 5% of companies with complex picking operations will pilot mobile self-­navigating and smart warehouse robots, according to Gartner. … These armies of robots are streamlining supply chains to deliver more efficient and predictable business results. Evidence is everywhere. Consider how for years Japanese factories have been running ‘lights out’ for weeks at a time with little or no human presence. Soon, companies will start ‘re­shoring’ by replacing overseas workers with robots. How far these technologies have advanced in the last few decades boils down to two words: exponential innovation. We put a man on the moon with less computing power than is now in the basic iPhone. It stretches the imagination to think what the next generation will accomplish.”

What Lanng doesn’t address is the potentially disastrous social effects of automation if millions of workers are displaced by robots. This is a topic in which I’m very interested and will write more about in the future. My belief is that all stakeholders (i.e., workers, politicians, business leaders, and academicians) need to seriously discuss how robotics and artificial intelligence can be used to enhance human abilities and work in a collaborative way. Jobs sustainability is likely to be one of the most important issues we face in the years ahead.

“Supply Chain Execution Convergence,” Fourtané explains, “describes the next generation of supply chains, which create a totally integrated supply chain by bringing together individual silos within the organization. This model offers supply chain managers new ways to create end-to-end visibility and the ability to quickly react to disruptions.” Organizational silos seldom result in the best outcomes. Corporate alignment requires that the entire enterprise work from a single version of the truth and that truth is derived from data. As noted above, there is going to be a lot more data generated and cognitive computing systems, like the Enterra Enterprise Cognitive System™ (ECS), which can Sense, Think, Act, and Learn®.

Evan Puzey, the Chief Marketing Officer at Kewill, told Fourtané, “In today’s complex business environment, agility is the new normal.” Puzey is correct. The business landscape will continue to shift and only companies that adapt to the new environment will succeed. Cognitive computing systems provide one of the technologies that allow companies to adapt as the landscapes shift because these systems learn as they work. In other words, technologies will not only change the supply chain but technologies (i.e., cognitive computing systems) will also allow the supply chain to adapt to changes that occur — regardless of how rapid or significant those changes are.