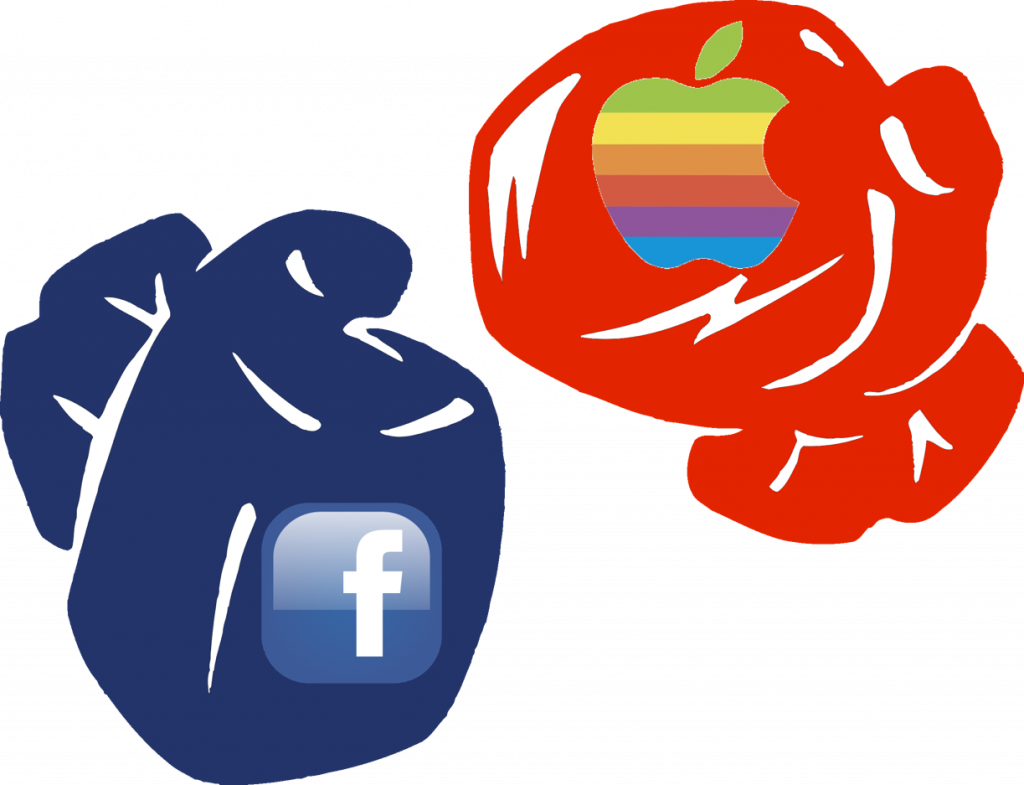 A simmering cold war between Facebook and Apple has recently heated up. Back in 2019, journalist David Ingram (@David_Ingram) noted, “Apple CEO Tim Cook has rarely missed an opportunity in the past year to hit Facebook about its privacy issues. Facebook CEO Mark Zuckerberg hasn’t been shy about hitting back, accusing Apple of ignoring the poorest of the world’s consumers.”[1] The feud heated up “when Apple said it had determined that Facebook violated its own rules for developers with a program that paid teenagers and others for their smartphone data. Apple then cut off Facebook employees’ access to internal Facebook corporate apps that run on iPhones and other Apple devices, a move that caused disarray at Facebook’s headquarters.” A few months later, journalist Will Oremus (@WillOremus) reported Zuckerberg sent a shot across Apple’s bow with the launching of WhatsApp. Oremus noted that in order for Facebook to become king of the messaging mountain, “Facebook will have to accomplish something no one else has yet been able to do: pull iPhone users off of iMessage, Apple’s enormously popular and user-friendly messaging platform. Ultimately, Facebook wants to build a whole suite of messaging-based services that would compete with popular iOS apps. That goal puts Facebook, for the first time, in direct competition not only with Snapchat, Google, and Twitter, but with Apple.”[2]

The cold war heats up

The most recent battle in the war between Facebook and Apple involves Apple’s app store. Anthony Ha (@anthonyha) reports, “Facebook joined the growing ranks of companies publicly complaining about the 30% fee that Apple collects on payments made through its App Store.”[3] Ha notes, that in a corporate blog post, Facebook wrote, “We asked Apple to reduce its 30% App Store tax or allow us to offer Facebook Pay so we could absorb all costs for businesses struggling during COVID-19. Unfortunately, they dismissed both our requests and SMBs will only be paid 70% of their hard-earned revenue. Because this is complicated, as long as Facebook is waiving its fees, we will make all fees clear in our products.” Ha adds, “To that end, the post includes screenshots of how the events payment flow will look on iOS and Android. On Android, it says, ‘Facebook doesn’t take a fee from this purchase,’ while on iOS, it says, ‘Apple takes 30% of this purchase’.”

In its continuing escalation of the feud, Zuckerberg called Apple’s app store “a deterrent to innovation and competition.”[4] According to journalist Mike Peterson (@mpetersonSD), this latest accusation came “about one month after both Zuckerberg and Apple CEO Tim Cook testified before the U.S. House Judiciary committee about alleged anti-competitive practices at both of their companies.”[5] Peterson adds, “The comments from Zuckerberg are only the latest illustration that there’s no love lost between Apple and Facebook.”

Targeting marketing and the Facebook/Apple feud

The latest tale in this ongoing saga involves the rollout of Apple’s iOS 14 operating system. Ronan Shields (@ronan_shields) reports, “The impending rollout of Apple’s iOS 14 will bring big changes to Facebook, most notably the end of collecting iPhone identifiers (IDFA), and the social network is warning advertisers to expect weaker ad performance as a result. By pausing IDFA collection, Facebook will effectively halt serving personalized in-app ads to iPhone users once they upgrade to iOS 14.”[6] Journalists Patience Haggin (@patiencehaggin) and Jeff Horwitz add, “Facebook Inc. said privacy changes in Apple Inc.’s latest operating system would cripple its ability to place personalized ads and deal a financial blow to app-makers, highlighting a high-stakes clash between the tech titans over the rules of the road in the mobile-internet economy. Under Apple’s changes, which will go into effect this fall in its iOS14 operating system, Facebook and other companies that facilitate online advertising will no longer be able to collect a person’s advertising identifier without the user’s permission. Many apps will begin asking users whether or not they want their behavior on the web to be tracked for the purposes of personalized ads.”[7] They note, “Facebook fears many users will reject tracking, if given the choice, affecting not only its business but also any app that uses its services to sell ads, from game-makers to news publishers.”

According to Shields, “Facebook claimed the iOS 14 updates will have ‘less impact’ on its own advertising business, although its ability to serve personalized in-app ads to iPhone users will undoubtedly be diminished, with measurement providers also likely to be impacted.” You can bet, however, Facebook isn’t heating up the feud with Apple as a matter of public service. Nevertheless, write Haggin and Horwitz, Apple’s new operating system will affect more than just Facebook. “[It also] will hit Google’s AdMob unit, which facilitates ad sales in apps, as well as several ad-technology companies that rely on tracking iPhone users. … An Apple spokesman said the company welcomed in-app advertising and wasn’t prohibiting tracking. Apple was simply requiring each app to obtain users’ explicit consent to track, the spokesman said.” Haggin and Horwitz conclude, “Facebook’s announcement is another shot in the increasingly contentious relationship between the two companies, whose different business models have led to public sparring.”

Targeted marketing has been a boon for brands who want to get the biggest bang for their advertising buck. Targeted ads are aimed at consumers who show the most promise for being interested in the products being advertised. App developer Anupam Chugh (@chughanupam) explains why Apple’s new privacy policy is such a big deal to advertisers. He writes, “For the uninitiated, a lot of apps today use an Advertising identifier (IDFA). It allows developers and marketers to track activity for advertising purposes. Plenty of marketing agencies backed by Google and Facebook run campaigns to record purchases, usage time, user actions, and subsequently serve personalized ads. Over 100K apps on the App Store today have the Facebook or Google SDK integrated which tracks and sends your data to the tech giants and third party brokers.”[8]

How deeply Apple’s new operating system will affect targeted marketing remains unclear. Some marketers believe consumers will continue to opt-in in order to receive free access to apps, while others believe the decline in revenue will be significant. Chugh concludes, “While Apple isn’t totally aloof from anti-scrutiny concerns and has been called out for its monopolistic ways of managing the App Store in recent times, one cannot deny their efforts to boost user-privacy. Long known to adopt a subscription business model instead of ads, Apple, without a doubt would face criticism for this decision from the advertisement agencies — some calling it unfair. But being the most popular mobile ecosystem gives them leverage over others to come up with such masterful strokes. They’ve given the world hope for an ad-free privacy-focused future which will surely win the hearts of consumers all over the world.” The question is whether consumers are willing to pay for “an ad-free, privacy focused” future.