Last month I posted a blog about the 2010 CSCMP annual conference held in San Diego at which I served as a member of a panel that was moderated by nationally-recognized supply chain technology expert Lora Cecere [2010 Council of Supply Chain Management Professionals (CSCMP) Annual Conference]. In that post, I noted that the Enterra Supply Chain Assurance Platform™ (ESCAPE™) was featured as one of two innovative technologies that are dynamically changing the supply chain technology landscape. The editorial staff of Supply Chain Digest took notice of that panel and published an article about the work Enterra Solutions® has done with Conair Corporation. The article’s sub-title reads: “New Proactive Monitoring System Lets Small Appliances Giant be Aware of ‘Shipments at Risk’ of Compliance Violations” [“Supply Chain News: Conair Fights Back in Retail Chargeback War,” 19 October 2010]. As one might imagine, I’m delighted that Enterra’s supply chain solutions are getting such positive feedback. The article begins:

“As any consumer goods manufacturer knows, so-called ‘retail chargebacks’ incurred for violation of any of dozens of ‘compliance’ requirements from a given retailer can result in substantial hits to the bottom line. The challenge of complying with those constantly changing rules and battling the sometimes erroneous charges has left many manufacturers viewing even high levels of such retail penalties as just a cost of doing business. Whether it is for generating chargeback revenue, reducing supply chain variance, or some combination of both, retailers for a number of years have had advanced technology from companies such as Compliance Networks to help them identify and document products and receipts that fail to me their compliance requirements. Technology support on the vendor side has generally been limited to distribution center execution, with capabilities in some leading Warehouse Management Systems (WMS) that aim to ensure retailer compliance in such areas as carton labeling, advanced ship notice (ASN) generation, pallet building, manifests, and transportation routing. But not everyone has those types of WMS capabilities, and even if they do, they usually do not address many other areas of chargeback potential, especially around ship and delivery due dates, and percent of the purchase order fulfilled.”

That was the state of things when Enterra Solutions started working with Conair. Especially important in this effort were John Mayorek, Conair’s Senior Vice President of Operations, and his compliance team. John took part in an Enterra-sponsored webinar that helped introduce ESCAPE earlier this year. To read more about the webinar, or to find a link where you can listen to it in its entirety, see my post entitled Reducing Retailer Compliance Penalties. That post focused on an article published by Consumer Goods Technology, the company that hosted the webinar.

“The status quo in compliance penalties was something Conair, the maker of the legendary hair dryers as well as owners of such brands as [Cuisinart], Waring and Travel Smart, decided it could not accept any longer. According to Conair Global CIO Jon Harding, Conair had developed pretty good processes for managing retail compliance, including having a small department with staffers whose job it is find the chargebacks, see whether in Conair’s opinion they were justified, and fight back with the retailers as required. ‘We were diligently challenging those fines,’ Harding said, ‘but we had to get more proactive in heading the challenges off.’ Technology, he believed, would be the key. We were looking for something that would keep up to date with retailer rule sets, and really predict against those rule sets what orders and shipments were at risk of not shipping on time or had other aspects to them that people had to deal with pretty much today,’ Harding said.”

Harding delivered those remarks via video at the CSCMP conference noted above. If you want to hear all of Jon’s remarks, you will find a link to the video in the post mentioned above. The article concludes:

“Harding said Conair wound up defining the objective as building an ‘at risk’ capability that would provide visibility to logistics and customer service about emerging compliance risks. Conair wound up turning to Enterra, an existing technology provider that had rules-engine capabilities. Conair worked with Enterra to build a proactive compliance monitor such as Harding envisioned. That system included going out to the web sites of Conair’s retail customers daily and ‘web scraping’ any changes to those requirements and updating the compliance rules monitor as appropriate. Though the project is still in its early stages, Harding says the ‘business result has been very encouraging.’ He adds that ‘We now have the ability to respond quickly to at risk orders. The shipping department is becoming more comfortable with that process.’ He said that Conair can also now respond more quickly to any chargebacks that are levied because all the data related to that incident is stored in one place. Harding added that ‘Going forward, we expect to see significant reductions in chargebacks levied and reduce overhead costs in our efforts to respond to those charges.’ With such a proactive system, Harding says, ‘You no longer have to just accept chargebacks as a cost of doing business.'”

Enterra® continues to work with Conair and is expanding the number of modules available in the ESCAPE suite. ESCAPE’s Retailer Compliance Module has three components: Proactive, Immediate (At-Risk), and Reactive (as described below). The newest module Enterra is working on is called the Pre-Inventory Prediction Inventory Module (also described below). 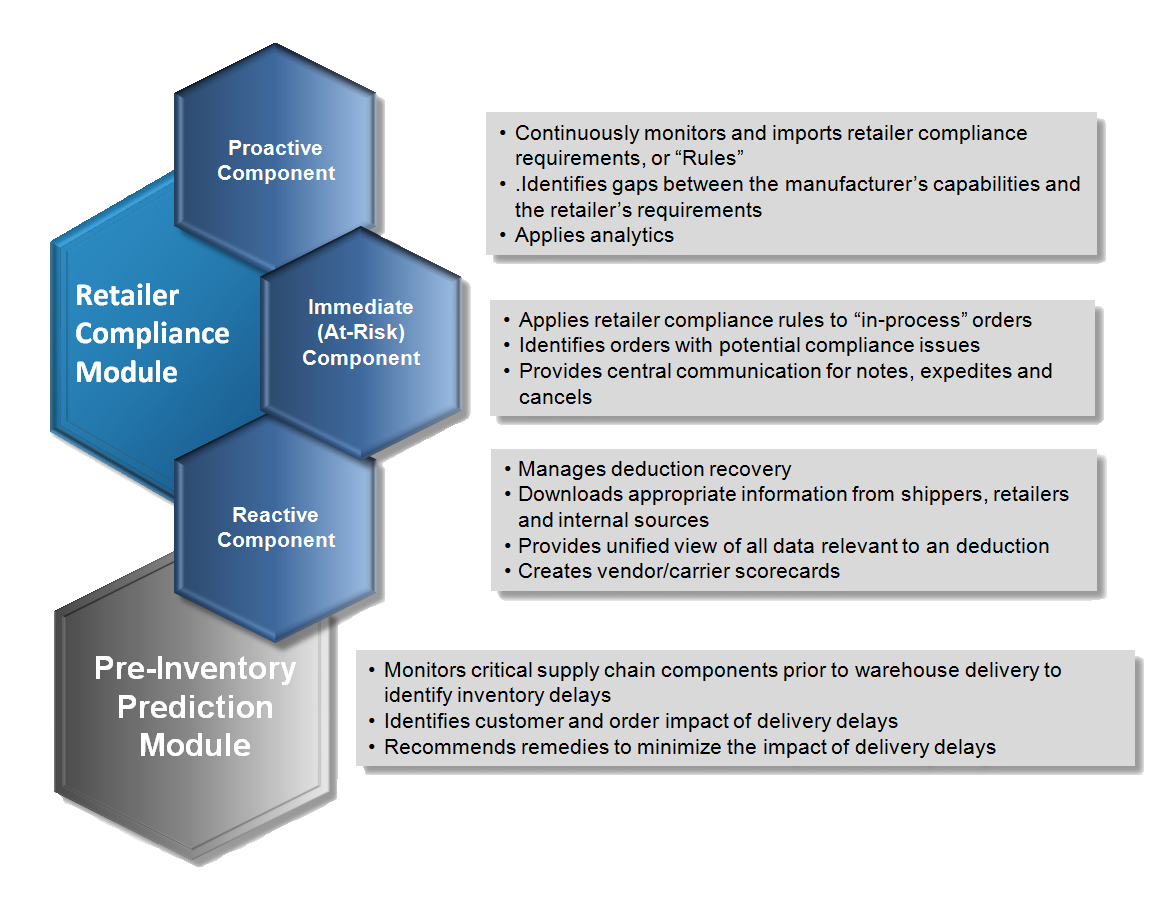 The PIP Module, which will be available in the first quarter of 2011. In addition, several other modules are already in work that we hope to introduce next year.