The Oxford English Dictionary defines “cognition” as “the mental action or process of acquiring knowledge and understanding through thought, experience, and the senses.” According to Mickey McManus, the former Chairman of MAYA Design, and Jay Venkat, a Managing Director and Senior Partner at Boston Consulting Group, business leaders aren’t paying enough attention to the cognitive capabilities within their organizations. They explain, “We live in an era of cognitive over­load. Smartphone notifications, social media chatter, and multitasking drain our attention. … To date, most companies and large organizations have stayed out of this discussion. But the opportunity costs of remaining on the sideline are too high. Organizations must not only pay attention to this newest form of brain drain but also devise ways to protect, restore, and build the cognitive powers of their employees, partners, and customers.”[1]

They assert the way technology is used can either result in “the strip-mining of cognition (through distraction and inefficiency) or the restoration of their inhabitants’ cognitive capacity.” They add, “When the environment we live in, not just the smartphone in our pocket, diminishes our ability to pay attention, we are playing a losing hand.” So how can technology help corporations play a winning hand? Former IBM CEO, Ginni Rometty (@GinniRometty), once explained that the field of cognitive computing was developed to help companies deal with cognitive overload. She stated, “[When IBM coined the term cognitive computing,] the idea was to help you and I make better decisions amid cognitive overload. That’s what has always led us to cognitive. If I considered the initials AI, I would have preferred augmented intelligence. It’s the idea that each of us are going to need help on all important decisions.”[2]

Rometty noted that cognitive computing was primarily focused on helping businesses make better decisions. That focus is important because, as Bain analysts, Michael C. Mankins and Lori Sherer (@lorisherer), assert, “The best way to understand any company’s operations is to view them as a series of decisions.”[3] They add, “We know from extensive research that decisions matter — a lot. Companies that make better decisions, make them faster and execute them more effectively than rivals nearly always turn in better financial performance. Not surprisingly, companies that employ advanced analytics to improve decision making and execution have the results to show for it.” For years, Enterra Solutions® has been working in the cognitive computing field with a focus on how to help companies make better decisions. Today, we describe the company as a first of its kind Autonomous Decision Science™ company based on cognitive computing technology and advanced mathematics.

Like McManus and Venkat, we believe cognitive overload can be relieved by the proper application of technology. They note that, too often, companies try in vain to change people. They suggest, “If you can’t change the person, change the environment.” They note, “Research is already underway into the power of physical spaces combined with behavioral tricks and nudges to protect our cognitive wellbeing and to develop healthy habits. These augmented spaces can become even more effective in regenerating cognition — but only if leaders pay attention to the cognitive ­impact of their real estate and IT decisions.” Their article is full of good ideas and I suggest a thorough reading of it. I want to concentrate, however, on the decision-making aspects of cognition and how cognitive computing can help relieve cognitive overload.

Journalist Joel Hans (@joelhans) writes, “Cognitive computing is often described as simply marketing jargon, so crafting a working definition is important, although it’s more fluid right now, and there isn’t one consensus that industry experts have settled on. Still, the foundation is that cognitive computing systems try to simulate human thought processes.”[5] The now-defunct Cognitive Computing Consortium did offer a definition:

Cognitive computing systems not only provide context they can handle ambiguity in order to tackle real-world challenges. At Enterra®, our human-like reasoning AI software serves as your data scientist, subject matter expert, and trusted counselor. It can analyze your data, understand your business processes and logic, and make decisions as if it were your best expert, achieving unmatched understanding and generating insights at a level of speed, accuracy, and with limited human intervention unparalleled in the industry. In other words, it dramatically decreases the cognitive overload your people face every day.

Srinivas Krovvidy, Director and Head of Advanced Analytics Enablement at Fannie Mae, insists, “No matter the field you’re working in, cognitive technologies can help you augment and amplify your capabilities to help you to be the best you can be.”[6] He adds, “Cognitive computing is all about helping people do more and work in smarter ways. … To get ahead of the curve, organizations need to invest time and energy into learning these technologies.” Boston Consulting Group (BCG) analysts note, “Businesses compete in a world that is growing ever more complex. Disruptive technologies emerge with increasing frequency. Customers’ needs and demands change at breakneck speed. New competitors are always entering the fray.”[7] They add, “To be successful in today’s complex and fast-changing world, companies must be highly agile and flexible — able to identify opportunities and make informed decisions quickly in order to exploit those opportunities. Those companies that are able to hone that agility in the face of increasing external complexity will emerge with a clear competitive advantage.” Cognitive technologies can help reduce cognitive overload, reduce stress, empower people, and strengthen corporate cognition. 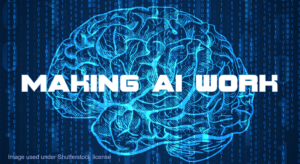 Artificial intelligence (AI) has been touted as both a potential savior and a potential destroyer of the world. Business leaders, however, are generally more concerned