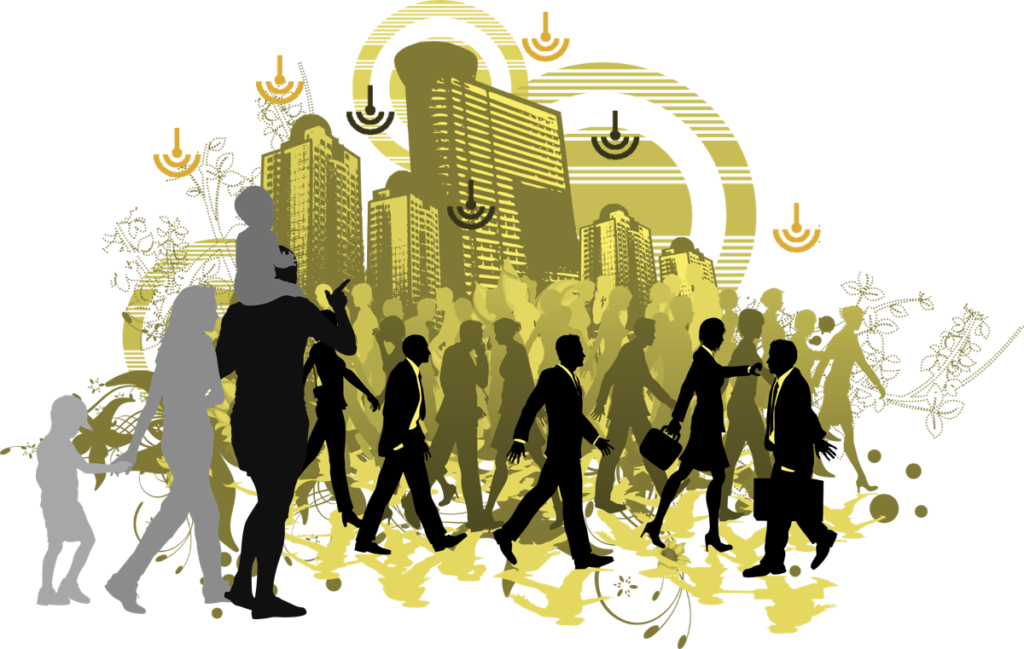 The smart cities movement is based on the premise that greater connectivity will make systems smarter allowing urban entities to use resources more wisely. Too often, however, discussions focus on technologies and physical systems rather than focusing on people and how technology can improve the quality of life for citizens. For cities to become truly smart, they need to foster citizen connectivity. Lance McKee (@OGClmckee) writes, “As citizens become more directly impacted by urban information systems, citizens need opportunities to influence the design of those information systems. Information system architectures reflect policy, whether published or not, or they reflect lack of policy.”[1] Providing ubiquitous connectivity is a real challenge. Past attempts have often been halted because of misuse or abuse. If you think that lack of connectivity is a third world problem, think again. The staff at Smart Cities World reports, “Some 1.75bn citizens in the world’s eight richest countries (by GDP) remain unconnected — with an alarming one third of those (34 per cent) residing in major urban centers, a new study reveals. The report, by the Wireless Broadband Alliance (WBA), serves to highlight that the digital divide remains a global problem, despite the fact, that driving universal connectivity is a common priority for all countries.”[2] With over half of the world’s population already living in urban areas (and that percentage is growing), making cities more livable is a critical issue.

No Smart Cities without Connectivity

Shrikant Shenwai, CEO of the WBA, notes, “Connectivity is now an essential commodity, much in the same category as power and water. Yet many people in some of the world’s major cities are still without an internet connection. Wi-Fi is playing an instrumental role in helping cities bring wider and more affordable connectivity to its citizens. The issue of the urban unconnected is of critical importance the economies and societies around the world. We call on Governments around the world to re-double their focus on connecting the urban unconnected. It’s vital that internet access becomes recognized as a human right, and that all stakeholders involved in the provision of broadband work together to make this happen.”[3] Shenwai’s remarks echo those of Brookings’ analysts, Adie Tomer (@AdieTomer) and Rob Puentes (@rpuentes), who bluntly state, “No industry or household in the world, will reach their future potential without access to broadband, it is the electricity of the 21st century.”[4] Since quality of life is an issue, it stands to reason that people with less access to technology risk being underserved.

Tony Poulos (@tonypoulos) asserts, “Humanity’s goal is to improve the quality of life and safety of all citizens, while making our world sustainable.”[5] While a laudable goal, I’m not sure it’s “humanity’s goal.” I’m thinking about the current political division in the United States that has been characterized as a rural voter versus urban voter battle. I’m sure rural versus urban politics is playing a role in many countries. Nevertheless, with a growing percentage of the global population living in urban areas, improving their quality of life certainly should be a universal goal. The rub, of course, is that smart cities aren’t developed without resources and many, if not most, cities are cash-strapped. Poulos writes, “Lofty as this might seem, there is a group at work proving not only that it can be done, but they’re building the platform to deliver it too.” Randy Frantz of ESRI, one of the key members of the TM Forum group working on a plan called the Connected Citizen: Life in a Green, Clean, Smart City Catalyst, told Poulos, “We are looking to harden the architecture of the platform, add a cyber-fraud detection and prevention layer, align it with the TM Forum Platform Model (Digital Platform Reference Architecture), and work with a city on a real implementation of a smart life service.” Poulos adds, “Ultimately, this project will deliver a platform that will mean that service providers will be able to design and offer new smart products and offerings faster to residents, cities and businesses, while improving the quality of life for all.” Whether the platform is affordable and makes it easier to connect all citizens, remains to be seen.

Technology and the Connected Citizen

A staff member at Techgoondu writes, “Smart technologies are now crucial to helping a city attract talent, create jobs and improve the quality of life for citizens. … In the global contest to attract talent, a city that offers a way to live, play and work more interestingly than another will draw the best and smartest from around the world, opening up opportunities for all in the city. Perhaps more importantly, smart technologies can bring real improvements to the quality of life of citizens. From solving urban congestion problems to monitoring air quality, they can provide a better urban living experience.”[6] It’s a simple truth that quality of life cannot be improved if unemployment is high. Technology is opening new job opportunities in urban areas and, as I noted in a previous article, large companies are once again finding urban areas attractive places to locate their headquarters.[7] Steve Hanley (@SteveHanleyRI) paints a utopian picture of what a truly smart city could look like.[8] He writes:

“As you commute to work in your connected car, the traffic lights are all green. The lane you drive in will be free of congestion. Your parking space will be reserved for you and a wireless charger will top up your battery while you work. Connected to the grid, the charger will also allow the battery in your car to provide electricity to the grid as needed to help balance consumption and keep peaker plants offline. At work, facial recognition software will record your arrival and keep unauthorized people out. Your smartphone will direct you to the proper elevator that will whisk you directly to your floor, where your workspace will be at the correct temperature. It will have windows that provide enough natural sunlight to keep interior lighting needs to a minimum while keeping out the heat of the sun to reduce cooling loads. A greywater recycling system will provide irrigation for fruits and vegetables growing on the roof, next to garden space where employees can gather during the day to socialize and relax. City water and sewage systems will be connected to promote maximum efficiency at minimal cost. Internet of Things sensors embedded in streets, light poles, and buildings will manage the flow of autonomous vehicles to reduce congestion and whisk people from place to place with a minimum of delay. Emergency vehicles will be dispatched to where they are needed and arrive quickly, thanks to priority access to city streets.”

Some people will find that picture skewed. For one thing, some people hope that automobile commutes (even those using electric, connected cars) become a thing of the past as public transportation becomes smarter and more user friendly. When automobiles are found in the city, some pundits are pushing the idea of shared vehicles. Urban parking spaces could be drastically reduced as shared vehicles remain in constant circulation — only stopping to be charged. It really doesn’t matter what idyllic picture you paint of smart cities. If that picture doesn’t focus primarily on people, it will never be truly smart.

Sam Pitroda, founder of a nonprofit think tank called The People for Global Transformation, is convinced that in order to be “smart,” cities first must be “happy cities.” In an interview with the staff at the Wharton Business School, Pitroda stated, “‘Smart city’ is one concept that has been, to some extent, oversold and under-understood. It is not about sensors and gadgets and software and more routers and more IBM equipment. A smart city [endeavor] is more about building a happy city. We are not saying that existing cities are dumb, but we need to use technology to create an environment where people are better off in terms of pollution, traffic, education, health, jobs, living conditions and cultural spaces. All of these are very important aspects of building a happy city, including security. But the idea is not to bring more cameras and more police and more guns. The idea is to build better communities.”[9] Better communities for all is what a people-focused smart cities should strive to become.