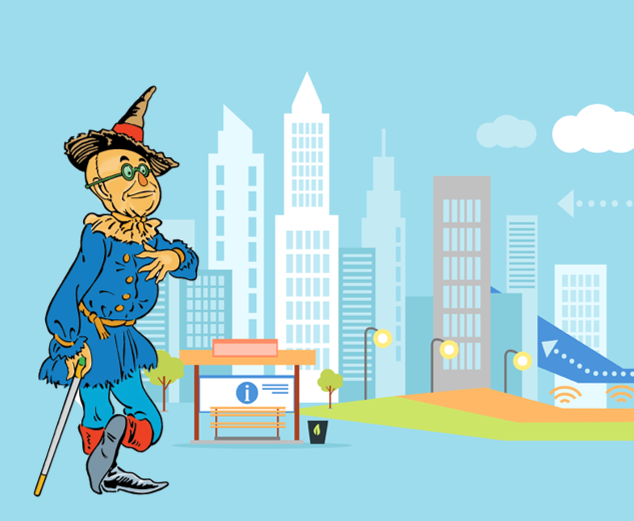 Smart Cities: If I Only had a Brain

We’re all familiar with the Scarecrow’s musical lament in the movie “The Wizard of Oz.” Part of the lyrics read:

Most urban areas have their share of trouble and pain; and, with projected urban growth, the trouble and pain will only increase. Like the scarecrow, cities need a brain. Fortunately, cognitive technologies can deliver. Prashant Gurav, a project manager at Cuelogic, explains, “A combination of artificial intelligence [AI] and machine learning [ML] can act as the brains of a smart city.”[1] It takes more than brains, however, to make a smart city work. In order for brains to work, they need stimuli. In the case of a city, stimuli come in the form of data. However, even the combination of AI and data is insufficient.

Zachary Rudzki, a Manager at TechNexus Venture Collaborative, explains, “While simply capturing and possessing data to inform future decisions … is a start, the real goal is creating interconnected ecosystems where each facet, whether person or machine, can freely access and react to information in real time. It’s easier to think of the difference between a connected city and a smart city as a static big data set versus a conscious organism.”[2] I like Rudzki’s “conscious organism” analogy explaining the difference between a connected city and a smart city. An organism — like the human body — consists of integrated systems. Limbs, organs, and other body parts are connected to the brain via the central nervous system. In the brain, data received via the central nervous system are integrated and analyzed and the brain generates appropriate signals to keep the body functioning. It’s an ecosystem. Smart cities have to develop a similar ecosystem consisting of cognitive technologies, the Internet of Things (IoT), and sensors. Gurav adds, “If a city is called a smart city it is generally given that it has some kind of IoT and ML machinery in place collects data from various points and sends it all to a central server for further implementation. So, once this data is collected it has to be used in some way.”

Charles Towers-Clark (@ctowersclark), founder and Chairman of Pod Group, observes, “To untangle the complexities of a city, first you must understand the people that live there. Gathering data around local population changes, demographics, economic growth and decline, and political and social allegiances is essential when planning a city or making small changes that affect the whole.”[3] He adds, “Getting a well-rounded view of a city is becoming more important as cities grow far larger and more influential than ever intended (especially true in Europe), and smart technologies may be one way to ensure that urban populations are served appropriately and in a sustainable way.” I agree with Towers-Clark that smart city planning needs to begin with people in mind. However, IBM believes “people” are one of six core systems smart cities must optimize and integrate. The other five systems are: business; transport; communication; water; and energy. I would add a seventh system — waste management (which includes both trash and sanitation). The ecosystem that will optimize and integrate these diverse systems involves sensors, the Internet of Things, and cognitive computing. Sensors generate data which is transmitted via the IoT to a cognitive computing platform where it is integrated and analyzed resulting in insights and actions. At least that’s the idealized version of how smart cities could work.

Over the next decade, cities are predicted to spend northward of a trillion dollars on smart city technologies. Dominique Bonte (@ABI_Bonte), Vice President at ABI Research, believes most of those expenditures will be for incremental improvements — and, he believes, cities can do better. He explains, “It is an illusion to believe that adding just a shallow layer of IoT technology to legacy urban environments will allow cities to address the urban challenges of the future, ranging from the provision of sustainable energy to the adoption of smart mobility and the construction of resilient cities.”[4] His solution is to address cities holistically leveraging “real-time modeling (digital twins of entire cities), and the automated, generative design of urban environments, both brownfield and greenfield.” He explains, “Modeling cities and optimizing operations through digital twins is great; designing them from scratch with Artificial Intelligence tools is better.” The only way a holistic approach works is through connectivity. Susan O’Connor (@susanoconn), director of public sector industry solutions marketing for Oracle, rhetorically asks, “Whatever happened to the ‘smart city’?”[5] Her answer, “It’s alive and well but morphing into the ‘hyperconnected city,’ powered by data analytics, artificial intelligence, Internet of Things, and other advanced technologies.”

Towers-Clark concludes, “Making our cities more sustainable, livable and better suited to their inhabitants is an urgent task as 68% of the world’s population is expected to live in urban areas by 2030. Measuring and monitoring the key indicators of both population and a city’s assets will help us to recognize what we have to work with, where things need to improve, and how we can implement smart city technologies to help alleviate strain as cities continue to grow.” Bonte adds, “Bolder, more holistic, cross-vertical, and closed-loop approaches are required to optimize and maximize the potential of available resources and services. This can only be done by leveraging a range of very advanced technologies including, urban modeling and digital twins, AI and automation, demand-response software, edge/cloud platforms, and generative design.” Gurav adds a word of caution “Although the implementation of ML and AI seems to ease and improve city services and life in general for people,” he writes, “the consequences of a wrongful or even mistaken use should never be overlooked or downplayed. Still, in its infancy, smart cities need to build a system of checks so that there is no room for a threat to privacy or bias from within the system.” The aim of any smart city should be to improve the lives of its citizens and optimize the use of resources in the systems they support. The Wizard of Oz scarecrow concluded, “I would dance and be merry, life would be a ding-a-derry, If I only had a brain.” Smart cities can sing the same tune if they ethically leverage cognitive technologies.