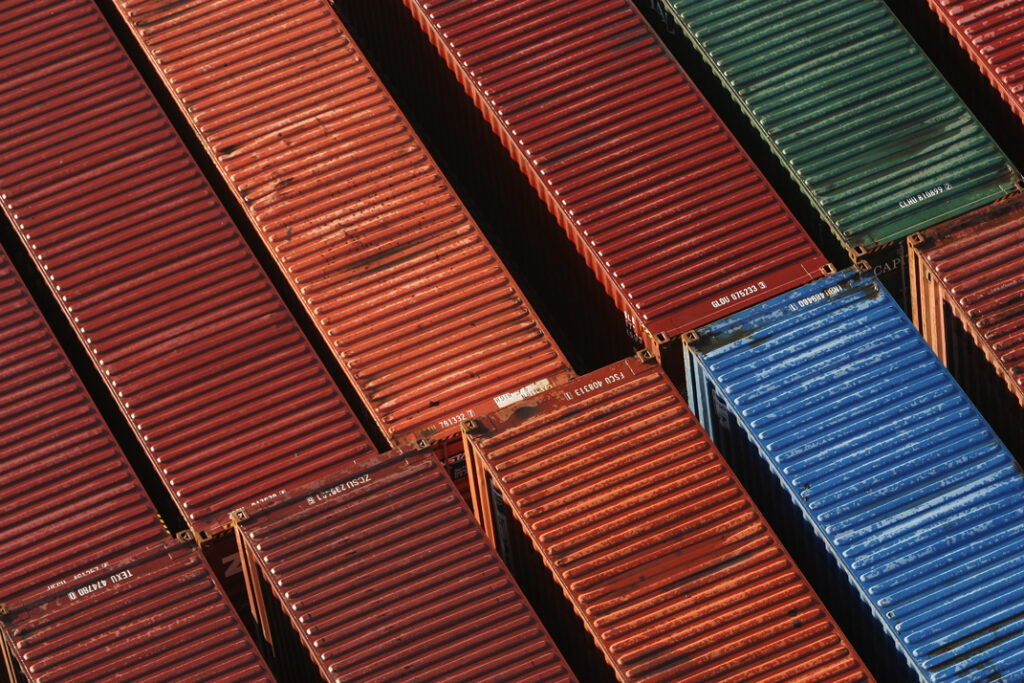 A recent episode of CBS’s “60 Minutes” ran a segment on some of the issues involved in the current global supply chain crisis — focusing primarily on U.S. port operations. During the episode, there was plenty of finger-pointing by various stakeholders. Much of the finger-pointing involved the movement of shipping containers into and out of port facilities. For the supply chain to work smoothly, a complex and highly choreographed dance, involving both full and empty shipping containers, must be performed. And stakeholders must carry-out their performance on finite dancefloor. The limited space available at port facilities is at the heart of the current port crisis. Correspondent Bill Whitaker (@BillWhitakerCBS) reported, “Getting the goods from here to store shelves is proving to be a lot more daunting. It used to take two days to get cargo off the docks. Now, it takes nine. … We flew over the sprawling Ports of Los Angeles and Long Beach — 40% of all U.S. imports come through here. We saw stacks of marooned containers, dormant cranes, loaded rail cars sitting idle. The country’s busiest ports packed to the gills. And out at sea? More than 80 ships stretched to the distance — a new record. They used to pull right in. Now, they can wait weeks.”[1]

Port operators insist the problem is a lack of trucks and drivers to get the containers off the docks. However, Matt Schrap (@mattschrap), CEO of the Harbor Trucking Association, told Whitaker, “There’s no driver shortage at the ports. He says it’s the antiquated booking system that’s gumming up the works. Schrap told us normally truckers make an appointment to return an empty container before picking up a full one. But with so little space at the ports, there are new restrictions on even the color of container that can be returned. Truckers can wait hours in line only to be turned away because there’s no room.”

Once drivers are turned away, the chassis on which an empty container sits becomes unavailable to pick up a full shipping container sitting on the dock. And a shortage of chasses can be a big problem. It’s a vicious circle. In the middle of this circle is the humble shipping container. Historian and economist Marc Levinson writes, “The intermodal shipping container — really, little more than a simple metal box — helped transform the world economy, stimulating international trade on a scale no one could have imagined and opening the way to what we now refer to as globalization.”[2]

Anna Nagurney (@Supernetworks), the Eugene M. Isenberg Chair in Integrative Studies at the University of Massachusetts Amherst, writes, “Today, an estimated 90% of the world’s goods are transported by sea, with 60% of that — including virtually all your imported fruits, gadgets and appliances — packed in large steel containers. The rest is mainly commodities like oil or grains that are poured directly into the hull. In total, about US$14 trillion of the world’s goods spend some time inside a big metal box.”[3]

Although merchants and seamen have been storing goods in some kind of container since the beginning of maritime trade, it wasn’t until the Second World War that standardized metal containers were used to transport goods. Marketing expert Robby Pedraza explains, “During World War II, standard sized shipping containers were developed to ship military cargo to the front lines. These boxes were called ‘Transporters.’ The term ‘conex’ came from the development of Transporters into Container Express or CONEX boxes after the Korean War. Conex containers evolved into modular units that could stack efficiently to store more cargo in one location.”[4]

Although helpful, the development of conex boxes wasn’t revolutionary. The revolution took place a few years later and was the inspiration of a North Carolina truck driver named Malcom McLean. Rosolino Candela, a Senior Research Fellow and Associate Director of Academic & Student Programs at George Mason University, explains, “The genius of McLean was not to ‘invent’ something new. Containers, ships, trucks, trains, ports, and cranes, all of which are necessary to transport goods internationally, had already existed for decades prior to 1956. Rather, it was to reorganize and link intermodal transport by land and sea in a way that no one else had realized before. Like any great innovation, container shipping was so obvious after the fact it is incredible that it had not been implemented earlier.”[5]

Levinson reports, McLean’s innovation was first demonstrated on 26 April 1956. On that date, he notes, “A crane lifted 58 aluminum truck bodies onto the deck of an aging tanker ship moored in Newark, New Jersey. Five days later, the Ideal-X sailed into Houston, Texas, where waiting trucks collected the containers for delivery to local factories and warehouses. From that modest beginning, the shipping container would become such a familiar part of the landscape that Americans would not think twice when they passed one on the highway, or saw one at the loading dock of the neighborhood grocery.”

Are Collapsible Shipping Containers the Answer?

I’m pretty sure McLean pictured his innovation as quick onload/offload operation during which shipping containers spent little or no time on the docks. What resulted, of course, was the building of massive container ships capable of carrying thousands of shipping containers around the globe. The millions of containers carried by those ships inevitably took up limited space in port facilities. As noted above, the problem is not just filled containers, but empty ones as well. Bloomberg reports, “Almost 27% of the 862 million crates measured in 20-foot equivalent units that pass through the world’s ports this year will be empty.”[6] With space finite, one would think that any innovation to create more room in existing space would be a good thing. According to Bloomberg, collapsible shipping containers may be the answer. “As ports, rail yards and warehouses get clogged up with the standardized metal boxes both empty and full of goods,” Bloomberg correspondents write, “the stars are aligning for a product that was a hard sell before the pandemic: shipping containers that fold up accordion- or collapsible-style to as much as one-fifth their usual size.”

I first discussed collapsible shipping containers a decade ago when Cargoshell was trying gain ISO certification for a collapsible TEU container.[7] Although their first attempt was 25 percent lighter than a steel container and had a reduced profile, it did have some drawbacks. These containers took one man approximately half-an-hour to expand or collapse. Considering the millions of containers used around the world, that represented a significant cost in both manpower and time. Cargoshell continued to improve its design. According to the company, “The current Cargoshell is the fixed version of the original concept. The certified Cargoshell also has thicker walls, which benefits the insulating properties of the composite and increases the strength of the container.”[8] As result of design improvements, Cargoshell asserts its product became “the first composite shipping container in the world to receive CSC certification from Germanischer Lloyd in Hamburg.”

“In 2013, 4Fold’s 40-foot metal boxes became the first foldable units to get certification from the Container Safety Convention and International Organization for Standardization, among others, meeting standards required by shipping lines, terminals and rail companies. More than 15 carriers and shippers navigating 60 ports worldwide are testing the Delft, Netherlands-based company’s environmentally friendly containers that can be folded into a quarter of their volume, taking up less space on trucks, ships and docks. These benefits saw Jim Hagemann Snabe, chairman of the world’s largest shipping line, A.P. Moller-Maersk A/S, refer to foldable containers as the ‘dream of the shipping industry’ last year. At the same time, consumer-goods producers including Procter & Gamble Co. are also testing the technology. … Despite sparking hope among carriers and shippers, higher upfront costs and hesitancy to turn to a new business model have kept foldable containers from becoming mainstream.”

Bloomberg reports another company, Staxxon LLC, has also gained full certification for its collapsible containers and is planning to put them on the market next year. Santtu Seppala, chief strategy officer at Staxxon, told Bloomberg, “Our solution would not only help greatly to alleviate the current crisis, but we’d also go a long way in preventing a similar crisis from occurring in the future.”

Although collapsible containers look promising, only their widespread use will make a difference in the global supply chain. Much of the hesitancy surrounding their use comes from the fact that they initially cost more than traditional shipping containers. Should they be widely used, however, Shao Hung Goh, a logistics and supply chain lecturer at the Singapore University of Social Sciences, told Bloomberg, “Carriers could save up to 57% in inland transportation costs by relying on foldable containers.” As a result, Goh notes, “Despite higher purchase and annual maintenance costs, foldable units would still be a more cost-beneficial option.” According to Goh, “The question remains to define what the optimal mix of foldable and regular containers carriers should maintain in their inventory is. If too few or too many foldable boxes are deployed, the purchase costs could offset the benefits.” For ports, however, being able to store five times as many empty containers in the same space used by traditional containers would be a windfall.