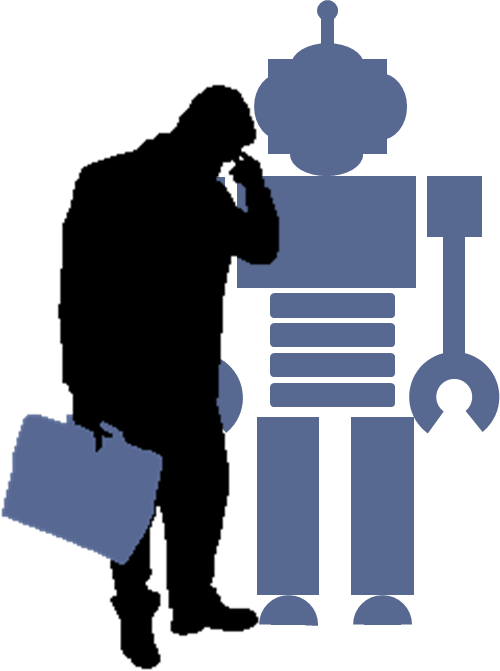 You may have read that Foxconn, the world’s largest contract electronics manufacturer, just fired 60,000 employees and replaced them with robots.[1] The news adds fuel to the debate about jobs sustainability (i.e., whether new technologies are going to eliminate so many human jobs that social upheaval is inevitable). Jacinda Tutty (@JacindaTutty) writes, “Robots are coming to take over the world, just not in the way Hollywood would have us believe. The legions of intelligent computer-powered machines aren’t coming to eradicate our species. They’re coming to take our jobs.”[2] That pretty much sums up the belief of those in the camp ascribing to the notion that the latest wave of technology is different than past waves — those technology waves managed to create more jobs than they eliminated. Tutty adds, “The ability to automate and use artificial intelligence in the workforce is accelerating as the whirr of drones grows louder in the air and driverless cars join cities and mine sites around the world. There’s no doubt automation will have a profound effect on the workforce and analysts from the McKinsey Institute believe automotive technologies could add an extra $33 trillion a year to the world’s economy.” The question remains: Will workers receive any of that windfall?

Despite growing evidence that automation is spreading into areas once thought safe for human workers, Ahmad Badr, Chief Executive of Abu Dhabi University Knowledge Group, remains optimistic about jobs sustainability. Nevertheless, he understands the anxiety automation is creating. “This year it feels like robots are suddenly everywhere,” he writes. “There are retailers and logistics companies investigating the potential of drones delivering everything from groceries and takeaways to vital medicine and emergency aid, while various stories of robotic doctors, robotic bankers and robotic artificial intelligence are a newsfeed staple. This is really all as the science fiction of the 20th century predicted. We don’t yet live on Mars or arrive at work on hoverboards, but the idea of a future where robots take over menial tasks and free up our time appears to be a real and closer reality. The concern, I would suggest, is that in this glorious image of a shiny robotic future, nobody mentioned that the robot butler was going to venture outside domesticity and head for your workplace. Even less that it was going to barge you unceremoniously out of the way on its way through the doors. Because that does seem to be the suggestion: the robots are rolling in and gunning for your job.”[3] He continues:

“The extent of their potential capabilities seems to grow by the day. Not content with menial roles, there is increasing consensus that artificial intelligence means even seemingly safe skill areas — leadership and decision-making, creativity and problem-solving — are not beyond the reach of their grasping metallic fingers. Already there have been discussions about how automation and computerisation will increasingly encroach on even highly esteemed and highly skilled areas such as finance and medicine; not by simply reducing workload but by reducing headcount. All of which sounds far from promising for those of us still hoping to play a role in this futuristic workplace.”

You might be asking yourself why Badr is optimistic about the future of jobs sustainability given the fact he paints a pretty dire picture of the situation. He’s optimistic because he believes in the indomitable spirit of human beings and their desire to be gainfully employed. He explains:

“If there is comfort to be had, it is that the nature of professional development and survival has always been thus — a need to traverse the gap between what you currently know and what you need to know to stay relevant and ultimately useful in the workplace. At any given moment in time, professionals have needed to think about their current skills and capacities, and be ready and willing to grow them further. This is true whether you had to transition between the steam and combustion engines, typewriter and mainframe, or the world of smartphones, the cloud and whatever comes next. It’s a brave person who makes definite and assured predictions about the future of the workplace. … The robots’ rise has simply underlined an already-evident lesson — plateauing and resting on your laurels in your career should never really be an option.”

Only a fool would claim that jobs are not going to be lost as new technologies are developed and implemented. Inevitably retraining and reskilling are going to be necessary for significant portions of the workforce if they are going to remain relevant and employed. According to Tutty, change is already in the air. “As the world balances on the cusp of the robotic industrial revolution,” she reports, “universities are reconsidering their higher education models, giving some courses the heave-ho in favour of other skills training required for the future, such as information technology and coding.”

I’m in the camp that believes we can and must create meaningful work if society is going to avoid some of the darker predictions about unemployment and social unrest that could result from automation. Jonathan Margolis (@TheFutureCritic), a Financial Times journalist, was reassured about the future after interviewing Ralf Herbrich (@rherbrich), Amazon’s Berlin-based head of machine learning.[4] Herbrich told him, “There is always a need for human intervention. … People are really good at seeing, tasting, smelling, hearing. Machines are not good at that. We’re just getting to the point where algorithms can recognise still images of cats and mice. But the brain does it much better.”

David Tuffley (@DavidTuffley), a Senior Lecturer in Applied Ethics & Socio-Technical Studies at Griffith University in Australia, told Tutty, that “dirty and dull jobs will be the first to go while creative, engineering, tech-based sectors will grow.” He went on to say:

“Any job that can be described as a process could be automated but any job that involves contact or empathy with another human being will always need a person involved. Humans will remain at the centre of employment but what we will see is that middle men will be cut. Logistics, truck drivers, delivery experts, sales staff, travel agents, miners, labourers, production staff — they will all see big changes.”

There is certainly enough smoke surrounding the topic of automation that we should be concerned about a fire. As Rachel King (@sfwriter) notes, “Some jobs will likely be lost and other will be created, but it’s difficult to predict just how those changes will impact the U.S. job market overall.”[5] Or, for that matter, the global job market. King reports that U.S. lawmakers are already feeling the heat on the issue. Andrew McAfee (@amcafee), principal research scientist at the Massachusetts Institute of Technology, told lawmakers at a congressional hearing on the subject, “We need to be teaching students and workers to be good at less routine stuff.” King reports McAfee went on to explain, “That includes creativity, social skills, and the ability to recognize a problem and go after that.” That sounds like good advice as you prepare for your new job — your old job was just automated.