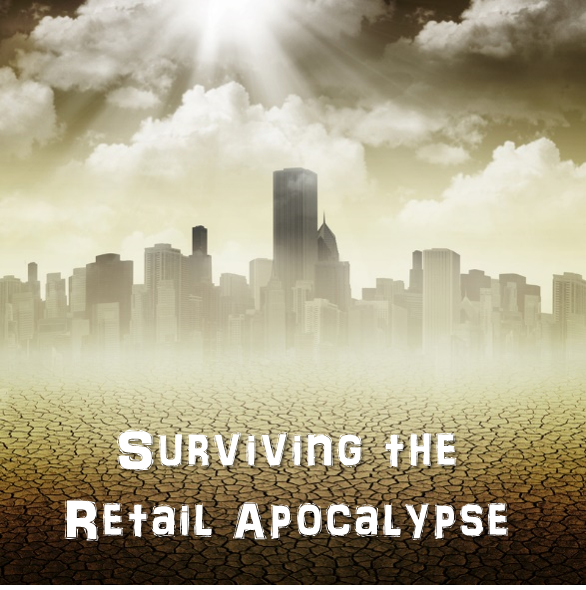 An apocalypse is defined as an event involving destruction or damage on an awesome or catastrophic scale. Over the past several years, thousands of brick-and-mortar retail stores have closed in what has been called the Retail Apocalypse. A couple of years ago, Robin Wigglesworth (@RobinWigg) charted the beginnings of the Retail Apocalypse and noted it shouldn’t have been a surprise “given the vast overbuilding of stores and shopping malls in recent decades.”[1] Wigglesworth also noted that data obtained from Credit Suisse and the Institute for International Finance showed as e-commerce rose sales in department stores dropped precipitously. “As a result,” Wigglesworth wrote, “many big retailers are shuttering stores across the US.” Efforts to halt the apocalypse are showing some results. Confirming the fact that some stores have stopped the bleeding, Daphne Howland (@daphnehowland) reports research from UBS found, “Retailers last year boosted their store productivity levels nicely: In the last four quarters, productivity has increased an average of 4.1%, up from average growth of 2.9% in the previous four.”[2] She continues, “Sales per store is a key (and perhaps obvious) indicator when it comes to predicting where and when a retailer might reduce its physical footprint. Over the last 12 months, retailers have shuttered about 1,000 net stores, compared to about 5,000 net closures over the previous 12 months. That easing was helped along by topline improvements last year, and those would have to be sustained to stave off further closures, UBS said.” Despite these encouraging signs, UBS analyst Michael Lasser believes e-commerce will increase. “This,” he states, “will likely lead to an acceleration in physical store closures in the upcoming year.”

The future of the retail apocalypse

Back in 2017, Bloomberg journalists Matt Townsend (@matt_townsend), Jenny Surane (@jennysurane), Emma Orr (@emmajorr), and Christopher Cannon (@homiedonttweet), predicted the retail apocalypse was just beginning.[3] In addition to the overbuilding and increase in e-commerce noted above, they pointed to high debt levels carried by many retailers as worrisome sign. They wrote, “The debt coming due, along with America’s over-stored suburbs and the continued gains of online shopping, has all the makings of a disaster. The spillover will likely flow far and wide across the U.S. economy. There will be displaced low-income workers, shrinking local tax bases and investor losses on stocks, bonds and real estate. If today is considered a retail apocalypse, then what’s coming next could truly be scary.” They concluded with quote from Charlie O’Shea, a retail analyst for Moody’s, “A pall has been cast on retail. A day of reckoning is coming.” For many retailers, that day of reckoning has already come. For others, a day of reckoning could still be in the future. Howland reports, “[UBS] analysts’ best case estimate is for 75,000 stores to collectively shutter by 2026, if e-commerce penetration rises from today’s 16% to 25%.” According to the UBS report, these closures will vary by sector. UBS store closure estimates for various sectors are: Apparel (21,000 closures), consumer electronics (10,000), and home furnishings (8,000). In the grocery sector, “Some 7,000 grocery stores (or 8% of the base) ‘could close if grocery eComm penetration rises from 2% currently to 10%’ by 2026, while home improvement stores could shutter about 1,000, according to the report.”

Admittedly, the numbers look bleak; but, for several years, analysts have insisted brick-and-mortar retailing is not dead. Sandy Skrovan (@SandySkrovan) asserts, “Despite the surge in e-commerce capabilities, mobile applications and other technology advancements — including voice-activated shopping — the majority of American consumers still want the tactile experiences offered by physical stores.”[4] To bolster that point, people need to be reminded that there are nearly 3.8 million retail establishments in the United States.[5] 75,000 store closures represents less than two percent of those establishments. The retail sector remains an important part of the U.S. economy employing nearly 29 million people and supporting more than 42 million other jobs. As Skrovan writes, “Long live the brick-and-mortar store.”

At the same time Bloomberg folks were predicting retailers were just entering an apocalyptic tunnel, other analysts were seeing a light at the end of the tunnel. For example, Steve Laughlin (@splaughlin), General Manager of IBM’s Global Consumer Industries, wrote, “Research shows that the industry is booming and that stores still matter. Recent data from the U.S. Census Bureau shows that less than 10 percent of all retail transactions happen online. So in the future, stores will play a new role to differentiate brands. With this in mind, retailers still have lots of work to do to cultivate good shopping experience if they are going to thrive even more. And opportunities abound.”[6] He went on to note that members of the newest generation of consumers, Generation Z, like shopping in stores. “This generation,” he asserted, “is looking for new ways to touch, feel, and experience products before they buy them, physical experiences only accomplished in a store. And with the global Gen Z population set to reach 2.6 billion by 2020, retailers need to create more interactive engagement in their stores to serve the ‘always on,’ mobile-focused, high-spending demographic. We need to bring digital technology into the store to truly transform the customer’s experience.” Lori Mitchell-Keller (@LoriMitchellKel), global general manager of consumer industries at SAP, agrees with Laughlin that customer experience is essential if retailers hope to survive the apocalypse. “Retail’s new normal is here,” she writes. “It’s a time of disruption and intense competition, and we all must learn to adapt in a digital atmosphere that moves at an aggressive pace.”[7] She continues:

“With pressure on all sides — the need for speed, personalized experiences, convenience, etc. — many retailers are reawakening to the ideals of personalized, yet highly scalable, retailing by leveraging digital technology and unparalleled consumer insights. There is a push to innovate in new ways to reach consumers, in their exact moment of need or impulse, using technology to deliver a just-in-time outcome within a transformed consumer experience.”

Laughlin and Mitchell-Keller aren’t alone in their belief that technology can help retailers survive the apocalypse. Coresight Research predicts 2019 will see a slowing of the apocalypse thanks to a “reinvention of the industry” made possible by “sophisticated technology, specifically artificial intelligence. In fact, Coresight predicts that in 2019, ‘Artificial intelligence will become retailers’ go-to technology.'”[8] Researchers note AI can be used to provide consumers with shopping assistants and recommendation engines. AI can be used in targeted marketing campaigns and in the prevention and detection of fraud. AI can also be used to help retailers optimize their supply chains, improve forecasting and inventory management as well as omnichannel order fulfillment.

Stuart Lauchlan (@WhoStu) insists, “Rumors of death in the retail sector have been greatly exaggerated.”[9] Like pundits cited above, Lauchlan believes retailers can leverage technology to survive the apocalypse. She suggests following recommendations found in a Deloitte/Salesforce report that include adopting a three-phased approach to becoming an Elite Performer. Those phases are:

Coresight researchers conclude, “The retail industry is in the midst of a sweeping transformation driven by new technologies and new business models. Artificial intelligence is one of the key enablers of this transformation.” The retail apocalypse is likely to continue for a few more years as retailers adjust to the new normal; but, new technologies can help them staunch the pain and regain control of their future.