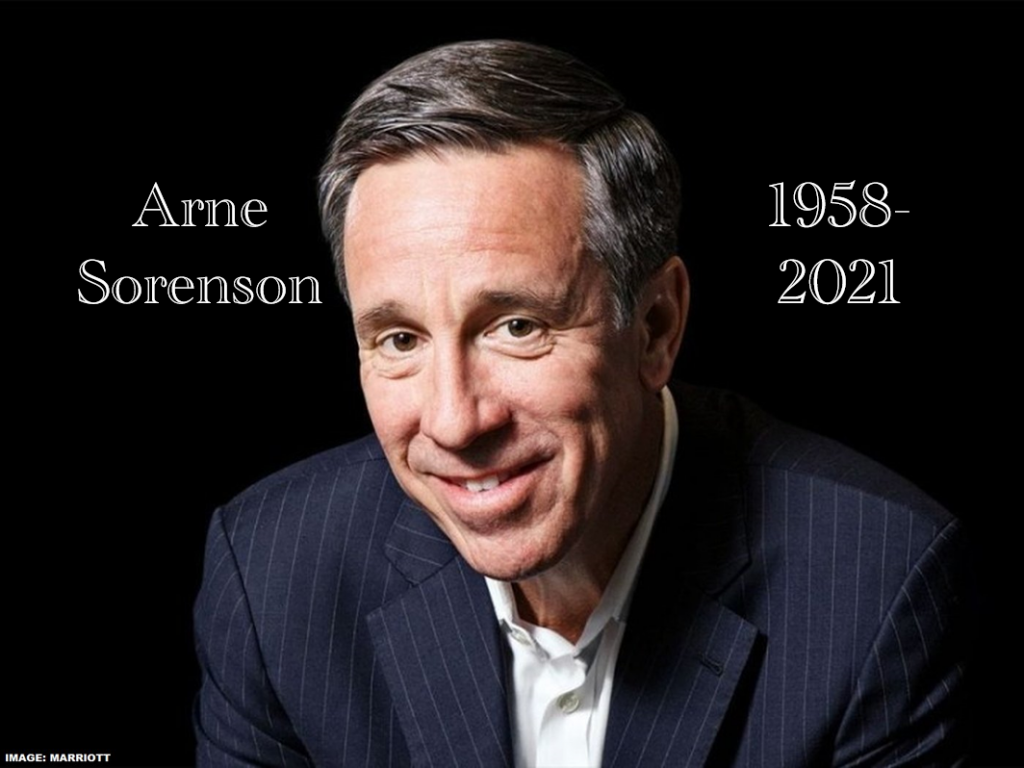 February is Ethics Month and, among the leaders of major corporations, few business executives have demonstrated the kind of ethical leadership offered by Arne Sorenson, the CEO of Marriott International Inc., who passed away this earlier this week from pancreatic cancer. He was 62. J.W. Marriott Jr., executive chairman of Marriott International, stated in a release, “Arne was an exceptional executive — but more than that — he was an exceptional human being.” The Washington Post reported, “Born Oct. 13, 1958, Sorenson started his career as a lawyer with the Washington-based firm Latham and Watkins. He met then-chief executive Marriott Jr. while representing the company in a shareholder case and joined the firm four years later, in 1996. He rose through the ranks quickly, becoming the company’s third chief executive — and the first one outside the Marriott family — in 2012.”[1] The New York Times adds, “Mr. Sorenson was outspoken about environmental sustainability, human rights and diversity and inclusion. He was on the boards of Microsoft and the Special Olympics and was a trustee of the Brookings Institution.”[2]

Sorenson understood actions speak louder than words — and his actions spoke volumes. The Wall Street Journal explains, “Mr. Sorenson’s ambitions and high-stakes deal making — he was a mergers-and-acquisitions lawyer before his hotel career — masked a softer side. Before he became ill, Mr. Sorenson visited more than 200 Marriott properties a year. He liked to stop by the kitchens to thank the line cooks and table bussers for their service and to ask about their jobs. … Near the start of the pandemic, Mr. Sorenson delivered a video address to employees in which he announced widespread layoffs and furloughs. Bald and gaunt from sessions of chemotherapy, he choked up during a raw and emotional speech that went viral. Mr. Sorenson was among a cohort of global business leaders who maintain that companies should be ‘good community citizens’ and not only worried about shareholder value.”[3]

Having spent more than 4-years-worth of nights at Marriott properties worldwide in my career (and more than 70 during the pandemic — mostly in Washington, DC, during the spring and summer of 2020), I can appreciate the work that the company has done to navigate the virus and to be resilient during a very difficult time. The people who were working at the hotels this past year were all very motivated and their adherence to cleaning and Covid mitigation techniques were consistently applied. I take this as an example of excellent corporate leadership. The heartfelt outpouring displayed by those who knew Mr. Sorenson best convinces me he was leader who embraced ethical principles.

As noted at the beginning of this article, February is Global Ethics Month. Mark McClennan (@McClennan), General Manager of C+C’s Boston office, writes, “With trust in business and government at historic lows and consumers questioning everything, ethical behavior is critical. As the Notre Dame Center for Ethical Leadership reports, doing the right thing takes time. In our hyperconnected society and 24/7 business culture, time is getting harder to find.”[4] He provides what he calls “the ABC’s of ethical failures.” It’s a list of character traits and actions that unethical leaders frequently demonstrate. McClennan believes, “Reviewing this list regularly can help make sure you … are not falling victim to any of them.”

Although recent events have demonstrated how those traits and actions by political leaders can result in catastrophic outcomes, business leaders are no less prone to demonstrating them — and don’t think you’re immune. A decade ago, researchers at the University of Utah looked into why people, who know better and believe themselves to be ethical, act in unethical ways. Tannith Cattermole reported, “Researchers at the University of Utah have been looking at the psychology of individual decision making in an effort to help organizations better understand thinking patterns in the workplace. The depressing, if a little unsurprising, conclusion is that what we know we should do and what we want to do can be two very different things, in other words, we are not as ethical as we think we are.”[5] She continued:

“[Unethical corporate practices in the past] have prompted academics to focus on the mechanics of decision making within companies. ‘The Ethical Mirage: A Temporal Explanation as to Why We Aren’t as Ethical as We Think We Are’ seeks to address the psychological processes of individuals and how they deceive themselves into thinking they are ethical people. ‘Companies typically don’t do bad things because they have bad people,’ said Kristina A. Diekmann, Ph.D., professor of management at the David Eccles School of Business, who co-authored the paper. ‘When people imagine or predict what they would do in certain situations, they think about what they should do, however, when it comes to actually making decisions, people tend to focus on what they want to do. They are not conditioned to think of the ethical consequences at the time of the decision,’ Diekmann went on to say. ‘What is particularly problematic is that when people deceive themselves into thinking they are ethical but don’t act accordingly, it encourages the continuation of negative behavior.'”

As I recall from psychology 101, humans continually find themselves confronting cognitive dissonance, which results in their using various rationalization strategies for dealing with it. The better a person becomes at rationalizing behavior the more often, I suspect, he or she does so. The pressure to rationalize is often intense.  In a 2007 essay, Shane Navratil, CEO of Zoomstart, wrote, “True integrity comes from individuals. Integrity is a personal code of conduct that goes above the letter of good conduct and encompasses the spirit of good conduct. Your word is your bond. Your word is good. Your intentions are to create a win-win situation. People count on your professionalism and they know they can. Integrity builds relationships. It’s not who you know, it’s who knows you. Just as important, it’s how they see you.”[6] From the obituaries cited above, it’s obvious that people saw Arne Sorenson for who he was — a man of integrity. He reminds us that being ethical is not antithetical to success.