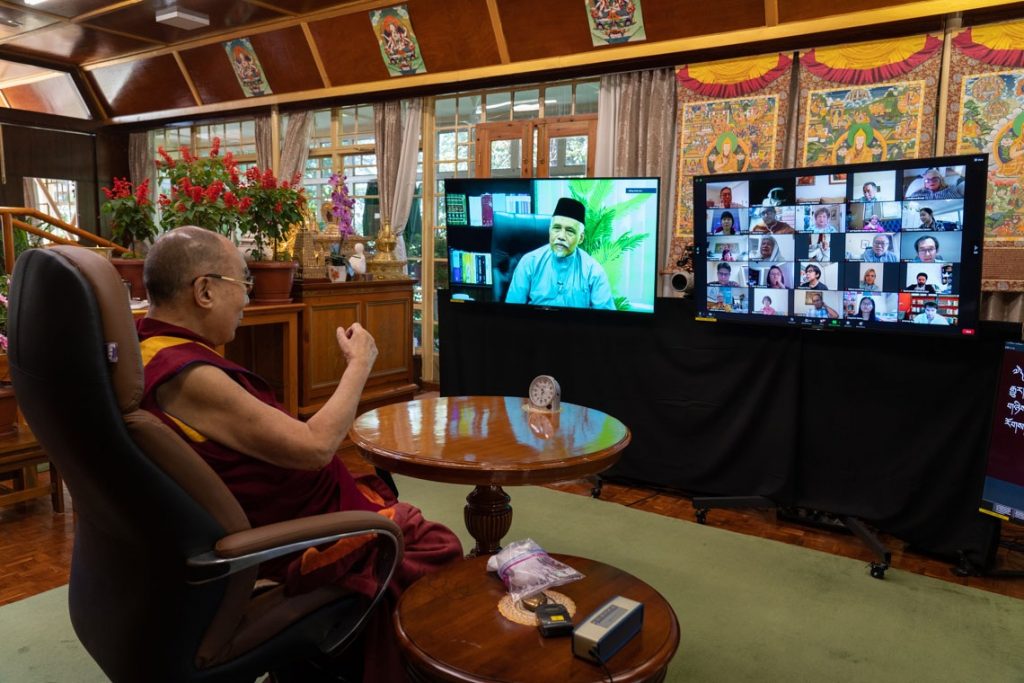 Profile in Leadership: The Dalai Lama

We live in chaotic times and the need for global leaders with calm voices and reasoned decision-making, based on facts and science, has never been greater. His Holiness, the 14th Dalai Lama, Tenzin Gyatso (born Lhamo Thondup), is one such leader. His approach to truth is evident in his best-selling book entitled The Universe in a Single Atom: The Convergence of Science and Spirituality. A brief summary of the book’s content notes:

“Galileo, Copernicus, Newton, Niels Bohr, Einstein. Their insights shook our perception of who we are and where we stand in the world and in their wake have left an uneasy co-existence: science vs. religion, faith vs. empirical enquiry. Which is the keeper of truth? Which is the true path to understanding reality? After forty years of study with some of the greatest scientific minds as well as a lifetime of meditative, spiritual and philosophical study, the Dalai Lama presents a brilliant analysis of why both disciplines must be pursued in order to arrive at a complete picture of the truth. Science shows us ways of interpreting the physical world, while spirituality helps us cope with reality. But the extreme of either is impoverishing. The belief that all is reducible to matter and energy leaves out a huge range of human experience: emotions, yearnings, compassion, culture. At the same time, holding unexamined spiritual beliefs–beliefs that are contradicted by evidence, logic, and experience — can lock us into fundamentalist cages. … This breathtakingly personal examination is a tribute to the Dalai Lama’s teachers — both of science and spirituality. The legacy of this book is a vision of the world in which our different approaches to understanding ourselves, our universe and one another can be brought together in the service of humanity.”

A recent article by Alex Morris (@AlexMorrisNY), reinforces the deliberate and contemplative approach the Dalai Lama takes to worldly challenges.[1] That approach is evident in how he answered the following question in Morris’ Rolling Stone interview:

Morris: “It’s hard not to worry. How do you keep yourself from worrying?”

Dalai Lama: “Through training how to tackle destructive emotion, and how to develop positive emotion. This is very important. All destructive emotion [is] based on appearances, not reason, so we cannot meditate on anger, hatred, fear. But positive emotions such as compassion, altruism, or enthusiasm are based on reality, on reason, so we can train [them] through meditation. Ignore seeing, ignore hearing, pay more attention [to] your mind. Only the human brain has the ability to concentrate on a point and analyze.”

This type of emotional intelligence and reason-based contemplative analytic thinking have been hallmarks of many of the world’s great leaders and should be core attributes of 21st century leaders who are navigating a rapidly changing global landscape. Rapid change requires great leadership and the ability to explain calmly the change that people are observing and experiencing — and do so with a compassionate outlook as to how people can live their lives in this changed environment.

There are precious few leaders on the global stage who garner nearly universal admiration and respect. As a former member of the Board of Advisors for the Dalai Lama Center for Ethics and Transformative Values at the MIT Media Laboratory, I have followed his career with more than casual interest. During these raucous times, his quiet voice is one of the few capable of piercing the cacophony that characterizes today’s social discourse. He is as humble as he is insightful. In his official biography, he describes himself “as a simple Buddhist monk.”[2] Of course, he is much more than that. The staff at Goalcast notes, “The Dalai Lama has devoted his life … to the pursuit of humanitarian and environmental causes, global peace, and dialogue between religions and peoples of all horizons. He has written many bestselling and inspirational books, and is the recipient of countless honors from across the globe, including the Nobel Peace Prize, which he was awarded in 1989.”[3]

Morris explains the Dalai Lama’s life has not been an easy one. She writes, “In times of trouble, the Dalai Lama’s story is one that bears repeating. The hardships include being plucked from his peasant parents as a toddler and ensconced in a spooky old palace, where he was tasked with relearning nearly every ounce of the knowledge he had managed to sponge up in his previous life as the 13th Dalai Lama. Then being required, at 15, to confront Chinese authorities who were invading his homeland and would soon take it over entirely. And they certainly include the time he, age 23, was forced to disguise himself and flee Tibet under cover of night, spending the next couple of weeks crossing deadly stretches of the Himalayas before arriving as a refugee in India, where he has lived in exile for the past 61 years.”

The Dalai Lama’s character and curiosity were revealed at an early age. Concerning his early years, Time Magazine correspondent Charlie Campbell (@CharlieCamp6ell) wrote, “It was a lonely childhood. The Dalai Lama rarely saw his parents and had no contact with peers of his own age, save his elder brother Lobsang Samden, who served as head of household. Despite his tutors’ focus on spiritual matters, or perhaps because of it, he was fascinated by science and technology. He would gaze from the Potala’s roof at Lhasa street life through a telescope. He took apart and reassembled a projector and camera to see how they functioned. ‘He continually astonished me by his powers of comprehension, his pertinacity and his industry,’ wrote the Austrian mountaineer Heinrich Harrer, who became the Dalai Lama’s tutor and was one of six Europeans permitted to live in Lhasa at the time. Today the Dalai Lama proudly describes himself as ‘half Buddhist monk, half scientist’.”[4]

Despite his exile and the hardships he has faced, BBC News correspondent Rajini Vaidyanathan (@BBCRajiniV) observes, “He is, without a doubt, one of the best-known people on the planet. In an age where celebrity is worshipped, the Dalai Lama is a faith leader who has become a spiritual superstar.”[5] The most important thing to know about his celebrity is that he didn’t seek it; nevertheless, he has embraced it. As he once stated, “It is under the greatest adversity that there exists the greatest potential for doing good, both for oneself and others.”[6] He has spent most of his 85 years on Earth trying to do good for others. As Morris writes, “His very job as spiritual leader of the Tibetan people was to act with equanimity. That he did so — and continues to do so — has made him an international inspiration, a beacon of hope to millions.”

Spreading hope has been one of the Dalai Lama’s lifelong pursuits. When Morris asked what he thought about the global coronavirus pandemic, the Dalai Lama told her, “This pandemic is very serious. Very sad. We’re just so afraid. That’s not useful. We must attack it — specialists, scientists, doctors, I very much appreciate. If the problem can [be] overcome, then no need to worry; make effort to overcome. If no way to overcome the problem, there’s no use too much worry.” Once again, his “half Buddhist monk, half scientist” personality is amply demonstrated. When Morris followed up and asked him how one could overcome worry, he responded, “All destructive emotion [is] based on appearances, not reason, so we cannot meditate on anger, hatred, fear. But positive emotions such as compassion, altruism, or enthusiasm are based on reality, on reason, so we can train [them] through meditation.” Compassion has been one of the Dalai Lama’s hallmark traits. He once stated, “Compassion is the radicalism of our time.”[7] He told Morris, “My main practice is altruism. My body, voice, mind [are] dedicated to the well-being of 7 billion human beings.” He added:

“Today, my number-one commitment is [to] try to promote a sense of oneness of 7 billion human beings. I’m hoping all the leaders of the world, and particularly the big nations’ leaders — America, Russia, China, India — see oneness of all 7 billion human beings. … Children at two years, they play together. They don’t care [about] other child’s religion, other nationality. Then once the children [start] education, [there’s] not much talking about warmheartedness, just knowledge; and that creates some feeling of ‘we’ and ‘they,’ and then, gradually, ‘my nation,’ ‘their nation,’ ‘my religion,’ ‘their religion.’ Our education should include moral teachings. Religion? No. But moral teaching. Your own successful life very much depends on warmheartedness.”

Today’s global challenges remain unmet because too few leaders see people as travelling companions on the same planet. When Campbell asked him about global warming, the Dalai Lama answered, “Global warming does not make any sort of exception — just this continent or that continent, or this nation or that nation.” When Campbell asked him, who is responsible for fixing the crisis, he answered, “America, as a leading nation of the free world, should take more serious consideration about global issues.” The Dalai Lama thinks about global warming and other global issues a lot, because they affect all humankind. Nevertheless, Campbell notes, he doesn’t take himself too seriously. “The Dalai Lama is a refreshingly unabashed figure in person,” Campbell writes. “His frequent laughter and protuberant ears make him seem cuddly and inoffensive, and it’s difficult to overstate how tactile he is. He appears equally at home with both the physical and the spiritual, tradition and modernity. He meditated within reach of an iPad tuned to an image of a babbling brook and mountains and a few minutes later turned to Tibetan scriptures written on wide, single sheets, unbound. He retires at 6 p.m. and rises at 4 a.m. and spends the first hours of his day in meditation.” We could use more leaders who do more thinking and less talking. What makes the Dalai Lama a great leader, however, is his simple philosophy of life. He once noted, “My religion is very simple. My religion is kindness.”[8]

The world desperately needs to quiet down and listen to voices of reason. Voices like that of the Dalai Lama. In the book noted at the beginning of this article, he wrote, “I believe that spirituality and science are complementary but different investigative approaches with the same goal of seeking the truth. In this, there is much each may learn from the other, and together they may contribute to expanding the horizon of human knowledge and wisdom.” It’s time the world sat down and reasoned together.