Every manufacturer wants to get its products on Wal-Mart’s shelves. The reason is simple: Wal-Mart is the world’s largest retailer. If you are a small company with a niche product, getting a share of that shelf space is not easy. Orabrush, a company that makes tongue cleaners, managed to do just that. Orabrush’s story came to my attention while reading an article by Sarah E. Needleman on the power of YouTube. “Can a YouTube video bring in big business,” Needleman asks. “If it goes viral, it just might.” [“How a Start-Up Landed Shelf Space at Wal-Mart,” Wall Street Journal, 23 September 2011] She continues:

“[In late September,] Provo, Utah-based Orabrush Inc. announced its flagship product – a tongue cleaner – would be carried in 3,500 of Wal-Mart Inc.’s 3,800 U.S. stores thanks to a social-media campaign launched two years ago. Orabrush initially marketed its tongue cleaners directly to consumers with a TV infomercial in mid-2008, according to founder Bob Wagstaff, who invented the product. But the strategy didn’t perform well. ‘We spent $40,000 on it and sold practically nothing,’ says the 76-year-old, who next cold-called several large retailers, asking them to carry the product, to no avail. Unsure why his efforts failed, Mr. Wagstaff approached a marketing professor at Brigham Young University about his dilemma. The professor agreed to let Mr. Wagstaff solicit students for suggestions on how to get the word out. One student suggested creating a YouTube video and volunteered to take up the task. Mr. Wagstaff accepted the offer, which resulted in a comedic two-minute video that cost about $500 to make. It quickly went viral and a series of related videos also made by the same student, now Orabrush’s chief marketing officer, followed soon after.”

At this point, I think it best if the folks at Orabrush tell their own story. If you watch the attached video, you’ll get an idea of why the company’s humor has allowed it to laugh all the way to the bank.

Needleman reports that “the company has its own YouTube channel that boasts more than 39 million views and 160,000 subscribers, who get alerts whenever a new video is posted to it. The channel, called Cure Bad Breath, is the third most popular YouTube channel behind OldSpice (No. 1) Apple (No. 2), according to Vidstax.com, a Web-analytics firm. Orabrush also has nearly 300,000 fans on Facebook, which the company uses to promote its videos.” Mark Twain once wrote, “Humor is mankind’s greatest blessing.” Advertisers have known for years that humor will keep a potential customer’s attention longer than a serious commercial; but can humor clinch the sale. Orabrush certainly thinks so. Needleman continues:

“Cure Bad Breath features 88 original shorts, all comedies, with titles like ‘Diary of a Dirty Tongue,’ ‘World’s Biggest Tongue,’ and ‘Is Your Tongue Kissable? Does Your Breath Stink?’ The company’s more recent videos are slicker than the originals and cost more to produce — between $3,000 and $5,000, says Orabrush’s CEO, Jeff Davis. Most of the actors in them are college students and recent graduates, which are also the company’s biggest customers.”

If you watched the video, you know that the company targeted Wal-Mart employees in the Bentonville, AR, area to bring home its message that Wal-Mart employees are not immune to bad breath. However, a Wal-Mart spokesperson, Tara Raddohl, told Needleman that “Wal-Mart didn’t base its decision to stock the tongue cleaner on Orabrush’s YouTube popularity.” I wonder if Ms. Raddohl’s (well brushed) tongue was firmly planted in her cheek? Raddohl did tell Needleman that Orabrush’s “videos likely raised its profile among consumers.” I don’t think that you’ll ever convince the executives at Orabrush that their YouTube campaign wasn’t the motivating factor behind Wal-Mart’s decision. Davis told Needleman that the YouTube campaign definitely got the company’s product into other retail stores. They know that because “store managers approached Orabrush on their own, citing requests for the product from customers who’d learned about it online.” Although Needleman reports that Orabrush “is on track to post $10 million in annual revenue this year,” she cautions that “posting a video on YouTube far from guarantees success.” She explains:

“Larry Chiagouris, professor of marketing at Pace University’s Lubin School of Business, says that while it may not take a lot of time or money for a small business to promote itself on a social-media outlet like YouTube, success can be tough to achieve and the odds of a video going viral are slim. ‘Making a video that’s interesting and provocative usually requires some degree of skill,’ he says. ‘It has to be something people want to share. That’s what gets it going.’ It also helps to have an affordable product that offers value to the consumer, he adds. That said, the effort to make a compelling marketing video could pay off in a big way. ‘If you’re close to closing a deal with a major retailer,’ says Mr. Chiagouris, ‘something like this could put you over the top.'”

Rhymer Rigby insists, “Humor is one way that brands can punch far above their weight in terms of awareness. When it works, a funny campaign or brand identity can differentiate a commodity product from its peers.” [“Brands that laugh all the way to the bank,” Financial Times, 6 January 2011] One example that Rigby uses is Kulula, a low-cost South African airlines. Back in early 2010, the airline painted one of its 737-800 aircraft (shown below) with a “Flying 101” scheme. The plane was an instant hit. 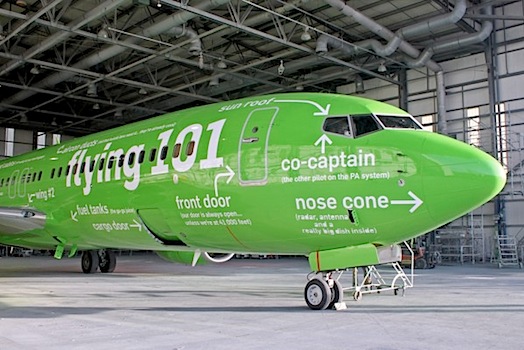 Nadine Damen, Kulula’s marketing manager told Rigby, “Humor is part of our brand ethos, although it’s almost less about being funny and more about being down to earth and honest. We have other airplanes painted in cow spots, camouflage and one with a zipper down the side.” In order to get people to pay more attention to the mandatory safety briefing, Kulula hired comedians to write them. Damen indicates that the company “got a lot of flak for this at first” but, critics had to agree that people paid more attention. Rigby continues:

“‘In a few sectors like beer, it’s almost a category norm,’ says Jim Prior, chief executive of The Partners, a branding consultancy. However, he adds, it is hard to do well. ‘Generally, you see some humor in advertising, which is quite discreet. But it’s rarely all that funny and it rarely goes all the way through. To do that, you have to be brave and confident.’ Many brands manage to be sporadically funny but those that successfully build themselves around humor are far more unusual.”

Rigby notes that “humour can also reinvigorate older brands. The example, he notes, is Old Spice.

“Old Spice has found a new audience with its ‘Smell like a man, man’ ads. Iain Tait of Wieden+Kennedy, the agency behind the campaign, says because a lot of men’s toiletries are bought for them by women, ‘we needed to create a character who was adored by ladies but who men don’t find threatening’. The answer was a character who combines extreme handsomeness with being funny. ‘It’s a very knowing kind of humor that comes from the character playing it straight,’ says Mr Tait.”

Since Needleman reports that Old Spice is the number one channel on YouTube, you’d have to admit that its campaign is working. The big question, Rigby notes, is: “Why don’t more brands take the plunge?” The answer, as noted above, is that “it is hard to do well.” Rigby concludes:

“Mr Prior says companies worry that being amusing makes people question their credibility. But, he argues, ‘consumers are more sophisticated than that. If you take an airline, passengers know that airlines take safety very seriously.’ ‘[The Old Spice ads don’t] send up the product and he doesn’t make fun of himself,’ explains Mr Tait. ‘You need to treat the audience with a bit of respect and credit them with intelligence. When you try and spoon-feed them the gag, that’s when it becomes embarrassing.’ Still, as the case of Kulula shows, the potential rewards are huge. ‘We’re a little airline at the bottom of Africa,’ says Ms Damen. ‘Who in the wider world would have heard of us if we hadn’t done this?’

Or who in the world would have heard of Orabrush if hadn’t gone viral on YouTube? Getting noticed for being humorous or a being great product is, of course, the ideal. If you are an unknown company, however, any attention can be helpful. Alan Sorensen, an economics professor at Stanford University’s Graduate School of Business, believes that “for small brands fighting for recognition in crowded markets, almost any publicity is beneficial.” [“Better to be reviled than ignored,” The Economist, 24 February 2011] The same cannot be said for established companies or brands. The article explains:

“One reason is that, for lesser-known brands, negative perceptions fade more quickly in consumers’ minds than their general awareness of the product. When coming across a brand whose boss is, say, a philanderer, they recognize it but don’t remember why. With established brands, on the other hand, the whiff of bad publicity lingers longer. … There are some limits to the theory. Vitaly Borker, the founder of DecorMyEyes, an online optician, tried to generate publicity by replying abusively to dissatisfied customers, and even allegedly threatening some of them with violence. Mr Borker boasted to the New York Times that provoking masses of complaints bumped him to the top of Google searches for eyewear. His brilliant plan backfired, however: Mr Borker was arrested in December [2010].”

Obviously, given the choice of generating laughter or revulsion, laughter wins hands down. William James once wrote, “Common sense and a sense of humor are the same thing, moving at different speeds. A sense of humor is just common sense, dancing.” Orabrush’s humorous campaign is a winner because its message makes sense. Let’s hope the company keeps dancing.