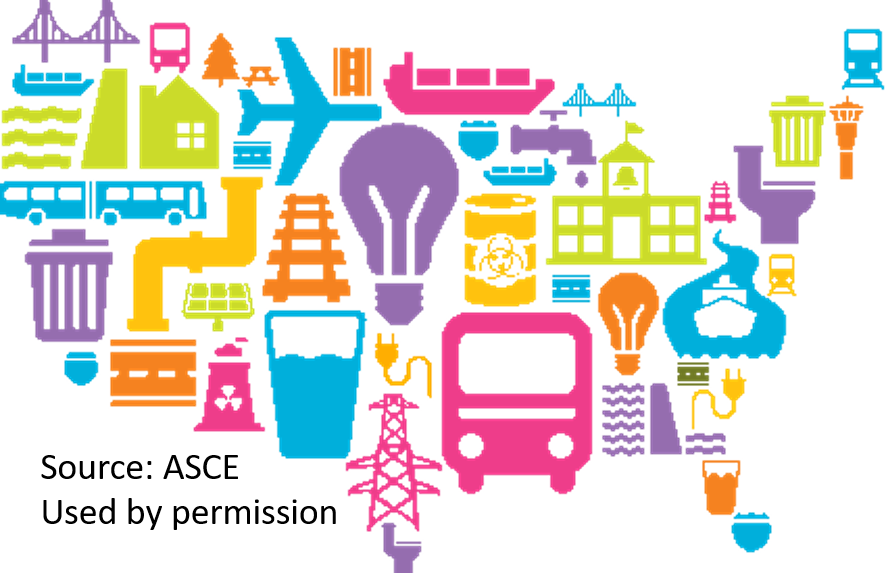 Most Important U.S. Infrastructure to Build is within its Borders

Over the past few years, the U.S. economy has boomed and unemployment rates have fallen. While the full impact of current trade and immigration policies remain uncertain, one thing is certain — if the U.S. wants continued economic growth, its infrastructure needs to be repaired and/or upgraded. With Congress now divided following midterm elections and more Washington deadlock likely, fixing America’s infrastructure should be an issue on which both parties can agree. The future of the U.S. economy depends on it. James McBride explains, “The $18 trillion U.S. economy relies on a vast network of infrastructure from roads and bridges to freight rail and ports to electrical grids and internet provision. But the systems currently in place were built decades ago, and economists say that delays and rising maintenance costs are holding economic performance back. Civil engineers raise safety concerns as well, warning that many bridges are structurally deficient and that antiquated drinking water and wastewater systems pose risks to public health.”[1] It would do Americans good to see politicians come together to fix these enormous problems. McBride adds, “Americans’ international peers enjoy more efficient and reliable services, and their public investment in infrastructure is on average nearly double that of the United States.”

The current state of infrastructure

Annually, the American Society of Civil Engineers (ASCE) publishes a report card on the state of U.S. infrastructure assigning letter grades to each infrastructure segment. The 2017 report card assigns an overall D+ to America’s infrastructure highlighting just how serious the problem is. Individual sector scores are shown below:

McBride notes, “Economists argue that robust investment in infrastructure in the twentieth century set the foundation for the nation’s strong growth in the aftermath of World War II.” If the current Administration truly wants to make America great again, repairing and upgrading U.S. infrastructure is the most logical and impactful place to start. The big question is how to fund infrastructure programs. Cadie Thompson (@CadieThompson) observes, “Regardless of who pays for it, … one thing is clear: America’s infrastructure is in dire need of repairs.”[2]

Who will pay to fix the infrastructure?

Who pays for infrastructure upgrades is the big unanswered question now facing the country. Most U.S. voters have demonstrated little appetite for raising taxes regardless of the purpose, including infrastructure upgrades. That’s a problem. Looking back at the ASCE Report Card, it’s little wonder Rail received the highest grade — that infrastructure is maintained by the rail industry not the government. To be fair, some states have fared better than others in maintaining their infrastructure. A study by CNBC identified the top ten states that have managed to keep their infrastructure in fairly good condition.[3] Those states are: Utah, Nevada, Florida, Kentucky, Minnesota, Tennessee, Ohio, Georgia, Indiana, and Texas. On the other end of the spectrum, the study found the following ten states falling woefully short in maintaining their infrastructure: Mississippi, Massachusetts, New Jersey, New York, Maryland, West Virginia, Connecticut, Maine, New Hampshire, and Rhode Island.[4] There are undoubtedly myriad reasons why some states have done well and others not so well. What is clear is that all levels of government need to be involved as well as the private sector.

With a ballooning national deficit and no appetite for tax increases, the Trump Administration recognizes infrastructure upgrades can’t be achieved by the Federal Government alone. As a result, the Administration has floated “a $1.5 trillion plan, comprised of $200 billion in federal funding over 10 years, which the Administration hopes will spur at least $1.3 trillion in additional spending from states, localities, and private investors.”[5] Jason Plautz (@Jason_Plautz) reports a Deloitte study agrees the private sector needs to be involved in helping finance infrastructure upgrades.[6] The Deloitte study concluded, “Governments will need to coordinate with the private sector and explore new financing strategies to get infrastructure projects off the ground.” Why would private enterprise want to get involved? Self-interest. Michael Collins, President of MPC Management, explains, “America is essentially in an infrastructure collapse that is having dire effects on manufacturing. Crumbling water systems that are unreliable can shut down production lines. Congested highways mean late deliveries, production loss, increased fuel and wage costs and excessive wear on assets. Port congestion, lock delays and the penalty associated with not having infrastructure in place to handle larger ships make American products more expensive.”[7] All businesses rely on their supply chains and nothing is more important to efficient supply chains than good infrastructure.

Elizabeth Drew observes, “It would be helpful if there were another word for ‘infrastructure’: it’s such an earnest and passive word for the blood vessels of this country, the crucial conveyors and connections that get us from here to there (or not) and the ports that facilitate our trade (or don’t), as well as the carriers of information, in particular broadband (if one is connected to it), and other unreliable structures. The word ‘crisis’ is also overused, applied to the unimportant as well as the crucial. But this country has an infrastructure crisis.”[8] If you want a great economy, you need great supply chains, and great manufacturing. To achieve that goal, you need great infrastructure. ASCE analysts insist we should make the most of this opportunity to upgrade infrastructure by utilizing “new approaches, materials, and technologies to ensure our infrastructure is more resilient.” We have the opportunity to improve America and its economy for generations to come. America can’t afford to let the opportunity pass. At the beginning of the year, Tom Donohue, President and CEO of the U.S. Chamber of Commerce, stated, “We cannot build a 21st century economy on 20th century infrastructure. … We have the political will, the bipartisan support — and we certainly have the need. Now it’s time for action.”[9] I couldn’t agree more.