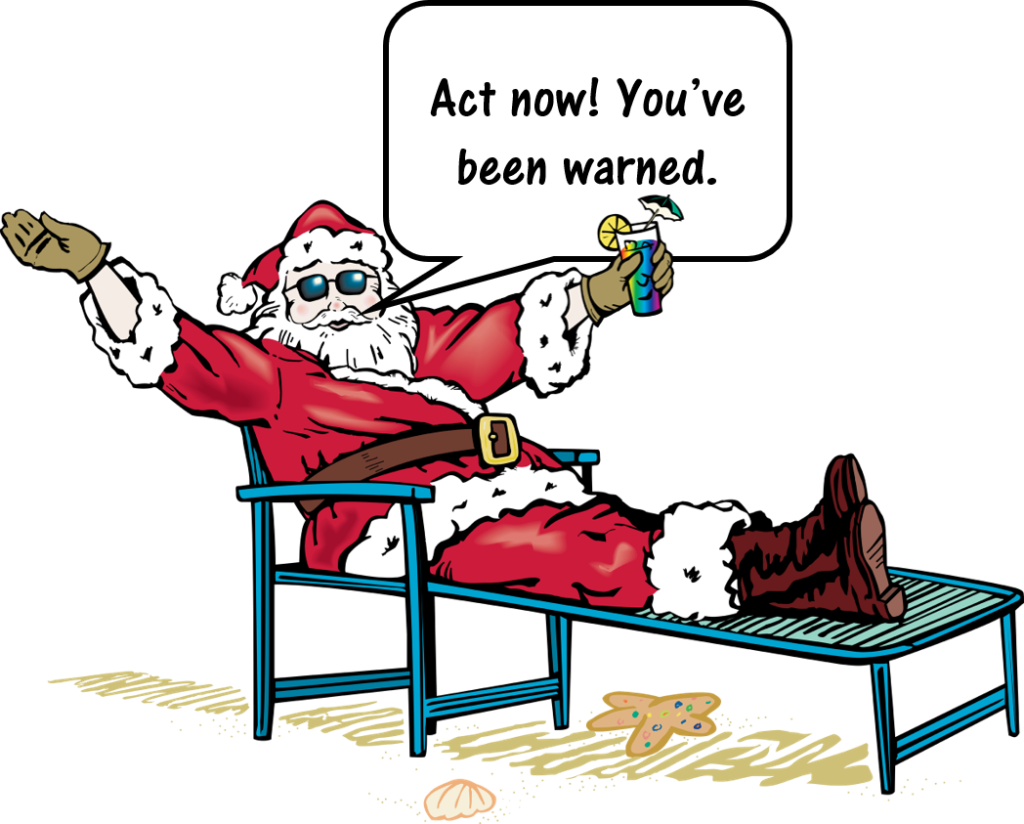 Celebrating Christmas in July has been around for longer than most people realize. Journalist Katherine Owen reports, “Christmas in July has become such a cultural staple each year that you may not have even thought about who first dreamed up such a cheery, potentially cheesy, midsummer celebration. … Christmas in July started [88] years ago on July 24th and 25th in 1933 at a girls’ camp called Keystone Camp in Brevard, North Carolina.”[1] It makes sense that a bunch of girls, sweating under the hot and humid southern sun, would find relief in recreating a winter celebration. Owen notes, “The first Christmas in July included carolers, a Christmas Tree, Santa Claus, presents, and fake snow made of cotton. As the tradition evolved, campers would use laundry bags as makeshift stockings, which they placed outside their cabins to be filled with candy overnight. Eventually elves, reindeer, and Mrs. Claus joined the act, along with a camp-wide gift exchange.”

Keystone Camp girls weren’t the only individuals who tried thinking about Christmas to cool down during the hot days of summer. According to James Tormé, son of crooner Mel Tormé, his father helped write one of the world’s most beloved Christmas songs during the heat of summer. “According to James, it was on a hot, oppressive summer day in 1945 that his father, Mel, went over the house of one of his writing partners, Bob Wells. ‘Wells was nowhere to be seen,’ James says, ‘But there was a spiral pad at the piano. There were four lines scribbled down on it in pencil.’ Those four lines were: ‘Chestnuts roasting on an open fire / Jack Frost nipping at your nose / Yuletide carols being sung by a choir / And folks dressed up like Eskimos.’ When Bob Wells eventually appeared, he told Mel that he had been trying to do everything to cool down on that hot day. Wells said, ‘I thought that maybe if I could just write down a few lines of wintry verse, I could physiologically get an edge over this heat.’ Forty-five minutes later, the lyrics of what would be ‘The Christmas Song’ were finished.”[2]

More recently, the Hallmark Channel has featured some of its Christmas movies throughout the month of July. And, not to be left out, retailers have also jumped on the Christmas in July bandwagon. Journalists Kristine Solomon and Rachel Sylvester report, “If you’re an early Christmas shopper, listen up: right now is your time to snag some serious deals. Yes, right now, when you’re alternately cranking up the AC and planning trips to the beach, some of your favorite retailers are having their biggest sales of the year — and savvy consumers are taking advantage of major discounts to stock up for the holidays. Over the years, Christmas in July grew from an annual tradition of celebrating the holidays at the mid-year mark to a giant retail concept.”[3] This year more people are starting to think about the holiday season, but not to celebrate.

Logistics Concerns Have Lots of People Thinking About Christmas in July

At the moment, uncertainty about the 2021 holiday seasons abounds. Two concerns top the list of reasons for this uncertainty: inflation and logistics. Inflation worries were stoked last month when U.S. inflation continued to accelerate at the fastest pace in 13 years. Journalist Gwynn Guilford (@sinoceros) reports, “Consumers are seeing prices rise for numerous reasons, as the U.S. economic recovery picks up. Richard F. Moody, chief economist at Regions Financial Corp., said the main driver of June inflation was booming demand that outpaced the ability of businesses to keep up. Another factor, he said, was the recovery in prices for air travel, hotels, rental cars, entertainment and recreation — all services hit hard by the Covid-19 pandemic.”[4] When things cost more, people buy less. That could be a concern for retailers. One of the reasons demand has outpaced supply is because of hiccups in the supply chain.

Bloomberg reports, “If it seems like shipping delays and soaring delivery costs aren’t getting any better, it’s because they’re both getting worse.”[5] They continue, “Throughout the pandemic, blame for global supply-chain disruptions has bounced from COVID-19 outbreaks to container shortages, from spendthrift Americans gorging on garden tools to a massive ship beaching itself across the Suez Canal in March. Those are still causing problems, but there’s a new hiccup that threatens to prolong the pain, maybe even long enough to upset Christmas shopping: The key export hub of Yantian in the heart of China’s factory belt was partially shut down in June to control virus cases, shrinking what little spare capacity existed in an industry that moves more than $4 trillion worth of goods across the global economy each year.”

Marcus Hand (@MarcusHand1), editor of Seatrade Maritime News, reports, “[The Yantian International Container Terminal (YICT)] says it now back at full operations handling around 40,000 teu daily across some 20 berths. However, the impact of the disruption, characterized as far greater than the Ever Given blocking the Suez Canal by Maersk, continues to be felt at ports across South China with disruptively high dwell times according project44.”[6] Project44 analysts note, “The data suggests that disruptions related to China’s Covid-19 quarantine efforts could extend well into the year, impacting seasonal shipments as far out as Christmas.” In other words, if you want to be sure to have something under the tree this Christmas, you better see what’s currently on store shelves or in eRetailers inventories.

Last year’s holiday season was plagued by last mile challenges. Traditional last-mile delivery carriers, like UPS, FedEx, and DHL, were booked to capacity months ahead of the shopping season and retailers that failed to book carriers ahead of time searched in vain for alternatives. Even the U.S. Postal Service couldn’t help meet the demand. An estimated 700 million packages didn’t arrive in time for Christmas. This year, logistics challenges could start near the first mile and continue to the last mile. Michael Brown, a Partner in A.T. Kearney’s Consumer Products and Retail Practice, asserts, “Retailers need to review forecasts and inventory commitments for Holiday 2021 which could be a blockbuster. Waiting to see what happens … will be too late for retailers to react.”[7] Greg Miller (@GMJournalist), Senior Editor at FreightWaves and American Shipper, agrees with Brown. He writes, “Christmas is still months away, but start worrying now about whether you’ll get what you want under the tree. It might end up stuck at the docks in China that morning.”[8] I think that’s a fair warning.