Lessons from the Edge of Globalization: 3 days in Iraq from the Syrian/Turkish Border to the Iranian Border

This blog is the continuation of an earlier post [3 Days in Iraq from the Syrian/Turkish Border to the Iranian Border]. I apologize for the interrupted storyline, but let me pick up where I left off. If you recall, I mentioned that I had met a family in Dohuk that is building a conglomeration of businesses. The amazing thing about this family is that they have built a conglomerate on the Edge of Globalization without access to institutional funding. They have accomplished this using sheer determination and employing canny business practices in an environment of instability and unregulated capitalism. They employ people, they build buildings, they utilize technology to manufacture and sell goods and services. They did not need governmental agencies telling them what to do — they only needed a security envelope (provided by the Peshmerga) and a cooperative government that encouraged development without over-regulation.

After we toured the facilities, our team went to a luncheon provided by our hosts at a restaurant about 30 minutes closer to the Syrian/Turkish border where we met the local governmental officials. This meeting took place at a beautiful location on a river bank overlooking a 1,500 year old stone bridge. 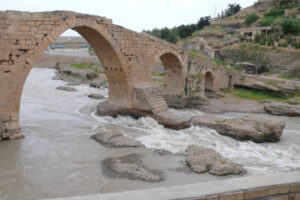 Bob Love, who is Paul Brinkley’s hard charging, extremely competent, deputy in charge of Iraq reconstruction briefly met separately with the regional leaders. More about Bob in a later blog. 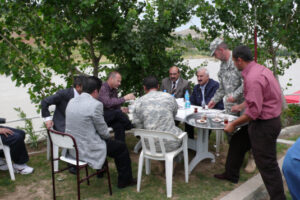 While Bob was finishing his meeting, Major John Wilson (the leader of the Civilian Affairs Team that heroically helped rescue Kurdish people from the truck bomb last week) presented a local leader with a flag that was flown over the U.S. part of the South Korean military base in Erbil as recognition for all he has done to build and make prosperous the Dohuk region. 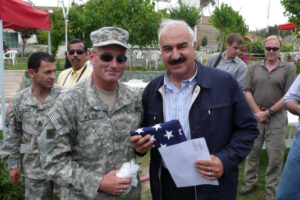 Well-dressed children were coming around us and selling candy and asking us about America. We took some very poignant pictures with the children. 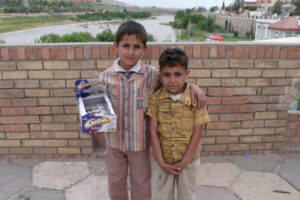 This was contrasted with the equally poignant children but in a more dangerous and destitute location outside a former Saddam Hussein prison. 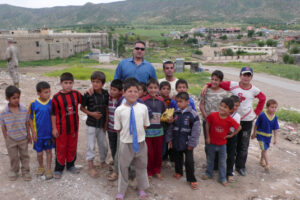 We then headed further west to the border crossing checkpoint with Turkey. We entered a small U.S. military post on the border and saw how this border is managed. Completely full trucks, stretching for miles into Turkey loaded with any product you can imagine are seeking to deliver their products to buyers in Iraq. However, on the opposite side of the border another story unfolds. There is a two week wait (yes, I said two weeks!) for trucks coming from Iraq to cross into Turkey. Along the road are makeshift housing facilities equipped with satellite dishes that drivers can use during their two-week wait along a dusty and dirty road that moves trucks from one holding pen to another as they creep up to the border inspection stations in Iraq and then to their equivalent inspection stations in Turkey. A combination of inefficiency, lack of advanced technology, marginal process efficiency, poor synchronization between Iraq and Turkey and, of course, the security requirement to thoroughly search every truck means the long lines are not going to disappear anytime soon. However, this is not the worst thing about the crossing. 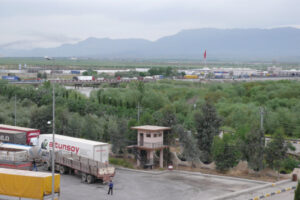 Virtually all of the trucks crossing back into Turkey from Iraq are completely empty. If there were robust manufacturing and other commercial business operations in Iraq, these trucks would be full of products to be sold in Turkey and to the rest of the world as they transit through Turkey’s ports. The only kind of trucks that do cross fully loaded are 3,000 gallon tankers filled with Iraqi oil destined for a Turkish power generation facility just over the border. The electricity produced by the plant is sold back to the Iraqi’s at western market rates. What this obviously says is that Iraq has the raw materials but does not possess the production capability to turn oil into electricity and as such pays a tremendous financial and strategic price for this lack of capacity. The net result of this border crossing reality is a Current Account trade imbalance of almost 100% between Turkey and Iraq.

Additionally, as Kurdistan booms economically, a tremendous amount of development work is being done by the Turkish companies who have the skilled labor and technology required to build the new Kurdistan. The Turks, however, are not bearing their fair share of the trade burden — in other words, this is not a real partnership.

Building the capacity to develop critical infrastructure industries is precisely what Tom Barnett and I are trying to build with our Development-in-a Box™ solution that provides reproducible solutions that can be rapidly delivered as a customizable push package to post-conflict, post-failed state, developing country environments. One big bright spot on our trip was in the energy production area. We saw a number of mid-sized energy production plant transactions being arranged and funded throughout Kurdistan. In fact Wayne Culbreth, a new friend and Managing Director of FDF Capital Management, is contemplating participating in or providing lead funding for an oil refinery in Kurdistan.

After we left the Turkish border, we drove south to the Syrian border. Along the way we saw a peaceful and pastoral landscape of rolling hills and dales. Interrupting that setting were roadside stockpiles of unexploded ordnance near where children played and animals grazed. The juxtaposition is unnerving and at the same time illustrates the resilience of the people and the regional economy to a constantly dangerous security and unstable economic backdrop. 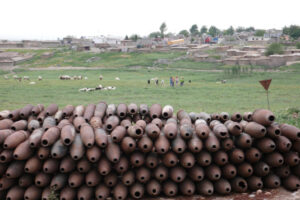 After the Syrian border visit, we proceeded to drive back to Erbil where we went through Kurdish checkpoint after checkpoint operated and guarded by the Peshmerga. They were on heightened alert as a result of the truck bomb of a few days earlier.

Our party stayed at the New City Hotel in Erbil. As you can see, it was quite modern and comfortable. It was while we were eating breakfast at the hotel that we heard the explosion from the suicide truck bomber at the Ministry of Interior about a mile and a half away. 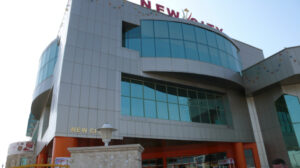 In one of my earlier posts, I also mentioned that last fall Kurd Prime Minister Nechirvan Barzani opened the city’s largest shopping center – the New City Mall. The mall stands in stark contrast to what many people think about Iraqi shopping areas –dirt paths winding through colorful open air stalls. As the image shows, the New City Mall looks like any modern mall that you could find in suburban America. 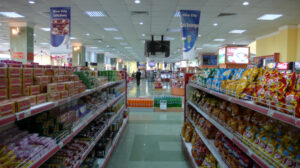 The next day we were supposed to take 2 Chinook helicopters to Sulaimaniyah. The helicopters were grounded due to high winds so we improvised and the civilian affairs team plotted a land route to Sulaimaniyah. We formed up another convoy and proceeded on the 2 ½ – 3 hour journey across a mountain range towards eastern Iraq and the Iranian border. The mountains were again beautiful. As our convoy sped through them, we could see how different Kurdistan is from other parts of Iraq. It is largely green and lush with vegetation and speckled with people working the land.

When we arrived at the border of Sulaimaniyah we were greeted by the Governor, some of his officials, and a security team that led us into the city center. We immediately went into a meeting with government officials and business leaders. Paul Brinkley (Deputy Under Secretary Of Defense For Business Transformation) was introduced and then the Governor addressed the audience. Following the Governor’s speech, Paul outlined his eloquent arguments about the need to rebuild the Iraqi economy and he extolled the relative safety and security of Kurdistan and Sulaimaniyah. The Governor then spoke about the growth of Sulaimaniyah and indicated that it needed to mature its banking sector rapidly. With that statement — and considering all the discussions of the previous days in Kurdistan leading up to this meeting — everything simply clicked in my mind as to how Development-in-a Box offers a transcendent governing principle for managing countries through the 4th wave of globalization.

As the Governor mentioned, the banking industry must be a key enabler of the Sulaimaniyah economy and needs to be immediately modernized and connected to the global banking ecosystem. Paul and I looked at each other in agreement, as if to say that — here on the Edge of Globalization — we have found affirmation of a new paradigm that can be used to smooth out the friction generated by the shifting of globalization’s tectonic plates taking place along the fault lines of what my partner Tom Barnett identifies as the seam between the Core (modern and integrating states) and the Gap (non-integrating, non-modern) states. Suddenly, the dialogues made sense that Maj. Gen. John Phillips, USAF (ret.) (who is Enterra’s Sr. Vice President for Global Logistics, Defense and a former Deputy Under Secretary of Defense, Logistics) and I have been having for months with Paul about Enterra going to Iraq . I had been resisting the idea, but all my skepticism fell away and I bought off on making Iraq work. Paul is a little like the CEO of an emerging company. He is an evangelist for new paradigms within the Pentagon and has to convince numerous stakeholders to adopt new ways of thinking.

The rest of the day was spent in meetings with a number of different government and commercial entities seeking cooperation and investment by U.S. companies. I was able to engage with government and banking officials about the creation of a core banking system and how our Enterprise Resilience Management Solution™ for the regional banking entities could assist them. I was also able to meet and engage with officials from ASAI Telecomm who have a similar interest to that of Korek Telecom in developing a core telecommunications system for their institutions.

Our dinner, also hosted by the Governor, was at a local restaurant where our entire team sat outside and enjoyed dining on a beautiful late spring evening. Again, this underscored the fact that resilience pays dividends. The dinner was largely a business development activity that allowed people to meet and negotiate in a social setting. I was able to talk with the CEO of a leading information technology and management consulting firm and one of his senior technologists. They want to team up to deliver a ResilienceNet™ solution around critical infrastructure in the Sulaimaniyah region.

The next day the team arose early and separated into different groups to conduct meetings. Another new friend, Subbas Sircar, who is the regional vice president of AIG for the Middle east, Mediterranean and South Asia, had an interesting morning meeting with local bankers. They are seeking to expand and strengthen local banks as I discussed earlier. This group craved exposure to current international banking best practices, core banking information technology and know-how that would allow them to connect to the global banking industry as well as the training and education that would allow staff members to raise themselves up to a minimal level of maturity so they can foster commerce in their region. This experience with bankers in Sulaimaniyah and in Erbil, along with the telecommunications companies seeking the same capability in their industry, are proof positive of the need for Development-in-a-Box.

Thus one lesson from the Edge of Globalization is that once a nation state or independent autonomous region, like Kurdistan, obtains a minimal level of security local stakeholders will seek, through their own efforts, to become market leaders. Entrepreneurs will virally develop businesses to meet market demands. Another lesson is that the people who possess resilient, adaptable and positive spirits are the ones that a make the difference. Throughout Kurdistan we found people who have that vital spirit. Therefore, I agree with Paul Brinkley, Bob Love and their team that Kurdistan is fertile for economic development and that it could be the bright shining beacon in the area for capitalism and democracy.

More later on analysis of the region based upon our last 8 days in Kurdistan.