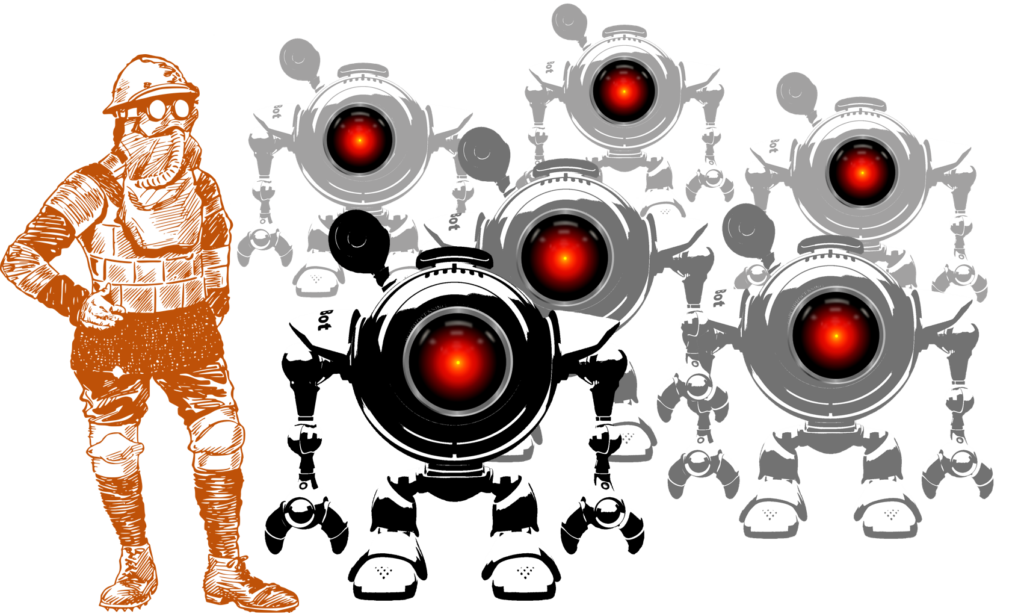 Jobs Sustainability: How Humans Can Beat the Robot Apocalypse

“Robots have long been maligned for job-snatching,” writes Jeanna Smialek (@jeannasmialek). “Now you can add depressing wages and promoting inequality to your list of automation-related grievances. Industrial robots cut into employment and pay for workers, based on a new analysis of local data stretching from 1990 and 2007. The change had the biggest impact on the lower half of the wage distribution, so it probably worsened America’s wage gap.”[1] Such news can and should be depressing for the average worker. Some pundits are labeling the coming years the Robot Apocalypse or the Automation Apocalypse. Whatever you want to call the future, an apocalypse is an event involving destruction or damage on an awesome or catastrophic scale. Not good. Amid the fear-mongering, however, there are experts who believe humans can survive and thrive during these turbulent times. For example, Deloitte executives, Stephen Redwood, Mark Holmstrom, and Zach Vetter, assert, “CIOs can take a proactive approach to preparing the workforce for the tremendous technology-enabled changes required to compete in the years ahead.”[2] And Sarah Kessler (@SarahFKessler) writes, “Before you start campaigning for a universal basic income and set up a bunker, you might want to also familiarize yourself with the competing theory: In the long run, we’re going to be just fine.”[3]

Jobs Sustainability and the Robot Apocalypse

You might be wondering how anyone can express optimism about the future of jobs sustainability. After all, the latest news hasn’t been very good.[4] Paul Martin, Director of Operational Excellence & Strategy at Allegis Global Solutions, points out the conundrum underlying the debate about automation and jobs sustainability. “A fun (if unlikely) exchange between Henry Ford, and the head of the auto workers union, Walter Reuther, is often referenced to underline the paradox of job automation,” he writes. “The story is that they took a tour of a new automated factory, where Ford quipped … ‘How are you going to get these robots to pay union dues?’, to which Reuther deftly replied … ‘How will you get them to buy cars?’.”[5] Kessler adds, “Widespread unemployment due to technology has never materialized before. Why, argue the optimists, should this time be any different?” Actually, the pessimists have an answer to that question. Just watch the following video.

As Martin notes, “The convincing position taken in the video, is that whilst the automation of work does inevitably create new jobs, those new jobs won’t come close to replacing the number of jobs that will be lost to automation.” If you watched the video, you might have been tempted to reach for some Prozac or Zoloft. What the video didn’t address was the conundrum Martin pointed out above: Who will be buying all of the products being produced by robots when the unemployment rate hovers around 45%? Kessler writes, “Today’s optimists believe that the latest automation technologies will create new jobs as well. What kind of jobs, they really can’t say (this is where the optimism comes in handy). About a third of new jobs created in the United States over the past 25 years didn’t exist (or just barely existed) at the beginning of that period, and predicting what jobs might be created in the next 25 years is just guessing.” Guessing isn’t a very solid foundation upon which to build a future. One of the reasons optimists are sanguine is that, to date, automation has often taken over tasks rather than eliminated jobs. Kessler points to a McKinsey study that concluded, “More occupations will change than will be automated away.” She adds, “What separates the optimists from the pessimists is that they tend to believe that the economy as a whole will recover from this short-term adjustment period.”

Survival Strategies in the Age of Automation

The question at hand is how will the human workforce manage to survive during the robot apocalypse? It won’t be easy. Apocalypses, both real and imagined (like the Zombie apocalypse), cause pain and suffering. We are likely headed for some hard times during which human workers are going to have to adjust to changing circumstances. This will involve extensive education, training, and reskilling. Martin asserts, “If your job is one of many of the same, and the output can be made more competitive (cost, quality, speed) through self-service and automation. Then your job will almost certainly become self-service or automated as soon as technology, cost, and legislation changes allow it to happen.” He claims there are “two survival options.” They are:

In the area of policy, law, and regulation, Martin believes we need a dose of both social liberalism and conservative pragmatism if we are going to survive the apocalypse. “If we can combine the best of Socialism (WeFirst) and capitalism (MeFirst), and embrace automation and machine learning,” he writes, “I see a bright connected future.” He goes on to write, “I agree with Erik Brynjolfsson who said, ‘Racing with the machine beats racing against the machine. Technology is not destiny. We shape our destiny.'” He could also have quoted Kevin Kelly (@kevin2kelly), founding Executive Editor of Wired magazine, who wrote, “This is not a race against the machines. If we race against them, we lose. This is a race with the machines.”[6]

Although I agree with Martin that individuals need to prepare themselves for multi-dimensional work, it will take all stakeholders working together to create outcomes that benefit both society as a whole and individuals specifically. Kessler writes, “There’s a lot of stuff going on outside of technological developments, argue the automation optimists, like the decline of unions, weakening of labor laws, tax laws that benefit rich people, and education policies that haven’t adapted to a changing world — these are policy problems, and we should fix them rather than blaming technology.” If “automation optimists” believe they are going to survive the automation apocalypse by promoting industrial age ideas and using industrial age language, they are primed for disappoint. We need new ideas and new ways of describing the challenge so that both sides of the political spectrum can embrace practical solutions to a looming and dangerous situation. Kessler observes, “Both [optimists and pessimists] generally agree that there should be measures in place to reduce the impact of labor displacement from automation, like education programs for re-skilling workers who will lose their jobs. One side just tends to have a more darker view of what happens after that.” She goes on to quote MIT’s Erik Brynjolfsson and Andrew McAfee, who wrote in their 2014 entitled, The Second Machine Age: “Our generation has inherited more opportunities to transform the world than any other. That’s a cause for optimism, but only if we’re mindful of our choices.” One of those choices is giving people an opportunity to engage in useful and meaningful work. Claire Cain Miller (@clairecm) writes, “Whether there’s political will for big changes remains to be seen.”[7] She goes on to discuss some of the strategies experts have suggested for meeting the robot apocalypse challenge. In today’s bitter political climate, I fear many of them are non-starters. They include:

As I noted above, many of these ideas (like starting another government-mandated pension fund) are non-starters in the current political climate. Perhaps we should put AI platforms to work on generating ideas about how humans can survive the robot apocalypse!