“Japan celebrated a national holiday on [May 5th] in honor of its children. But Children’s Day might just as easily have been a national day of mourning. For this is the land of disappearing children and a slow-motion demographic catastrophe that is without precedent in the developed world. The number of children has declined for 27 consecutive years, a government report said over the weekend. Japan now has fewer children who are 14 or younger than at any time since 1908.”

As I noted in the previously mentioned blog, the Japanese fascination with robots is in large measure due to the hope that they will one day replace workers who, in the future, simply won’t be available. The current situation in Japan creates two connected challenges — too few young and a growing elderly population.

“The proportion of children in the population fell to an all-time low of 13.5 percent. That number has been falling for 34 straight years and is the lowest among 31 major countries, according to the report. In the United States, children account for about 20 percent of the population. Japan also has a surfeit of the elderly. About 22 percent of the population is 65 or older, the highest proportion in the world. And that number is on the rise. By 2020, the elderly will outnumber children by nearly 3 to 1, the government report predicted. By 2040, they will outnumber them by nearly 4 to 1.”

Like some European countries, Japanese political leaders are encouraging their citizens to have children, but with little success. The downstream consequences are severe.

“Japan, now the world’s second-largest economy, will lose 70 percent of its workforce by 2050 and economic growth will slow to zero, according to a report this year by the nonprofit Japan Center for Economic Research. Population shrinkage began three years ago and is gathering pace. Within 50 years, the population, now 127 million, will fall by a third, the government projects. Within a century, two-thirds of the population will be gone. In what is now being called a ‘super-aging’ society, department and grocery stores have recorded declining sales for a decade — and new car sales have fallen for 18 consecutive years.”

“Rural Japan, thus far, has borne the brunt of the slide. In depopulated small towns, stores are closing, governments are desperate for tax revenue and there are chronic shortages of doctors and nurses. The government is subsidizing the development of robots as caregivers for the old.”

The rest of the world is bound to learn some valuable lessons from the Japanese experience; but for the Japanese, these lessons will come at a dear price. Harden reports that Japan is really becoming a country of big cities and all roads seem to lead to Tokyo.

“To a steadily increasing degree, Japan’s future depends on metro Tokyo, the world’s largest megalopolis. It is home to about 35 million people, or 27 percent of the country’s population. But in Tokyo, children account for just 11.8 percent of the population, according to the new government report. That’s the lowest proportion in all of Japan.”

Tokyo is not the city you think about when you say “adults only.” Inevitably, Japan will have to open its doors to immigrants. It is a policy that they have long postponed because they know that it will change their culture. They shouldn’t be too concerned, however, some of the world’s greatest cities have a wonderful mixture of cultures and ethnicities that help them thrive. The biggest challenge for Japanese leaders, should they allow immigrants in, will be to get them to settle in those that have for the past quarter century been depopulating. If they can do that, perhaps America can find a model for repopulating some of its rural areas as well. 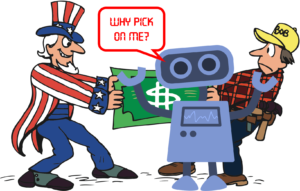 Are Robots Going to be Subject to Death and Taxes?

In a 1789 letter, Benjamin Franklin wrote, “Our new Constitution is now established, and has an appearance that promises permanency; but in this world nothing

Robots: Rise of the Machines