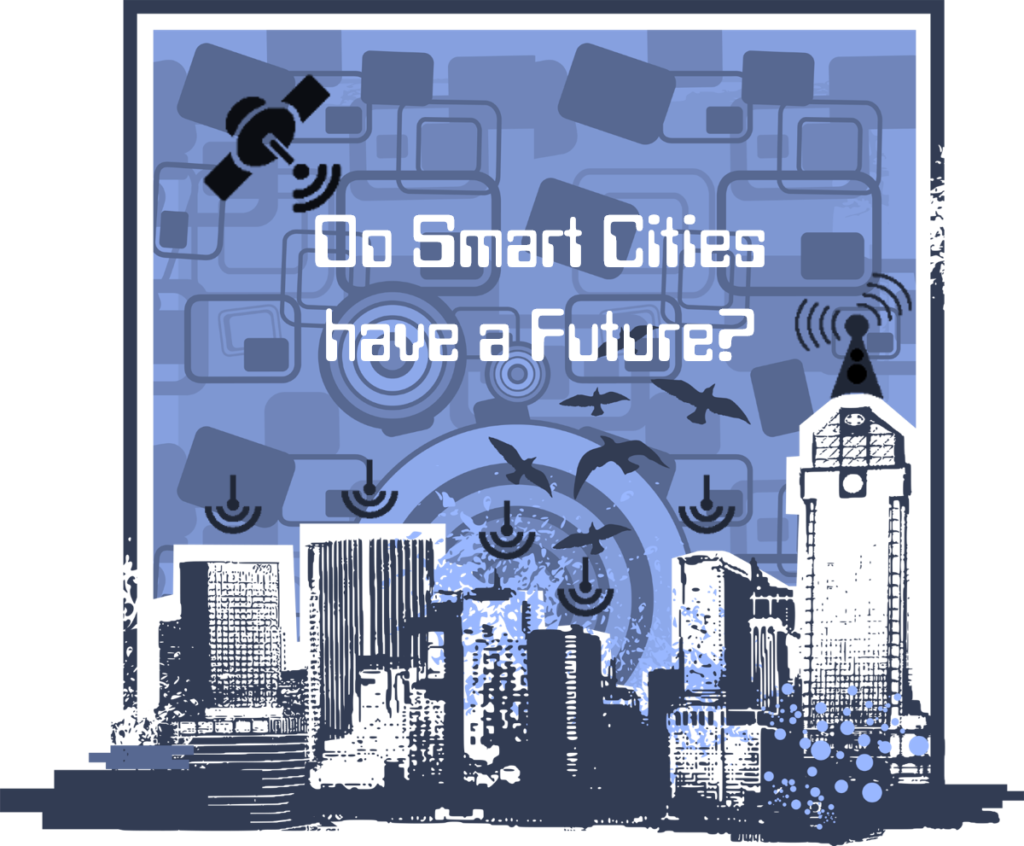 Is There a Future for Smart Cities?

Futurists and science fiction writers spend a lot of time thinking about what future urban environments are going to look like. Futurists are generally optimistic, while science fiction writers often portray dark, dysfunctional urban environments. No one can say for sure what the future of the world’s metropolises will look like — only that the majority of the world’s population will live in them. As a result, the importance of optimizing scarce resources while providing a good quality of life for urban residents will continue to rise. Journalist Abdul Montaqim (@abdulmontaqim) explains, “The uncontrolled and exponential growth of metropolises around the world has led to developments that put mega-cities at risk and turn them into places that, at best, can be difficult to live in and, at worst, could severely limit the world’s future social and economic viability.”[1] Smart city technologies can help avoid such a future.

Although most smart city initiatives are intended to make urban life better, there is a growing suspicion that the connectivity needed to make cities smarter will also foster a surveillance culture that intrudes on citizen privacy. With so many questions and concerns abounding, the future of smart cities remains up in the air. The Forbes staff writes, “The concept of ‘smart cities’ — urban areas where functions ranging from traffic management to security are improved through embedded digital technologies — isn’t new. But as technology, including the Internet of Things, autonomous vehicles and biometric identification, continues to evolve, the list of what’s possible in next-generation smart cities continues to grow. While issues such as biases in artificial intelligence and a lack of underlying infrastructure still need to be tackled, it’s not out of the question that within just a decade or two, city dwellers will have access to a host of services that will make everyday living easier and safer.”[2]

Ideally Cities will Take a System of Systems Approach

To improve quality of life and make cities more livable, planners should always put people first. Charles Towers-Clark (@ctowersclark), founder and Chairman of Pod Group, observes, “To untangle the complexities of a city, first you must understand the people that live there. Gathering data around local population changes, demographics, economic growth and decline, and political and social allegiances is essential when planning a city or making small changes that affect the whole.”[3] He adds, “Getting a well-rounded view of a city is becoming more important as cities grow far larger and more influential than ever intended (especially true in Europe), and smart technologies may be one way to ensure that urban populations are served appropriately and in a sustainable way.” A “well-rounded view” of a city includes understanding the systems essential for metro-living — and, according to IBM, “people” are the most essential system.

In addition to people, IBM believes there are five other core systems smart cities must optimize and integrate. They are: business; transport; communication; water; and energy. I would add a seventh system — waste management (which includes both trash and sanitation). The ecosystem that will optimize and integrate these diverse systems involves sensors, the Internet of Things (IoT), and cognitive computing. Sensors will generate data which will be transmitted via the IoT to a cognitive computing platform — where it will be integrated and analyzed resulting in insights and actions. At least that’s the idealized version of how smart cities could work. Many analysts believe this system-of-systems approach is essential to make a city truly smart. Michael Anderson (@MtAndersn), CEO at Expeto, believes a system-of-systems approach will result in a harmony that cannot otherwise be achieved. He states, “Virtually all things will be instrumented, enabling an orchestra of data that can be used to improve all aspects of the city. From smart sensors that monitor essential resources to advanced AI tools that predict failure events, everything will be connected, with ubiquitous, reliable and high-speed broadband available to enhance the way people move, communicate and live.”[4]

Fernando Alberto Brügge, an analyst at IoT Analytics, reports that research supports the idea that a system-of-systems (what he calls “holistic smart city development”) approach works. He writes, “At IoT Analytics, we have extensively researched the current developments in the smart city space and found that there are seven things that set the leading cities apart from the rest.”[5] The following graphic depicts what those seven things are. 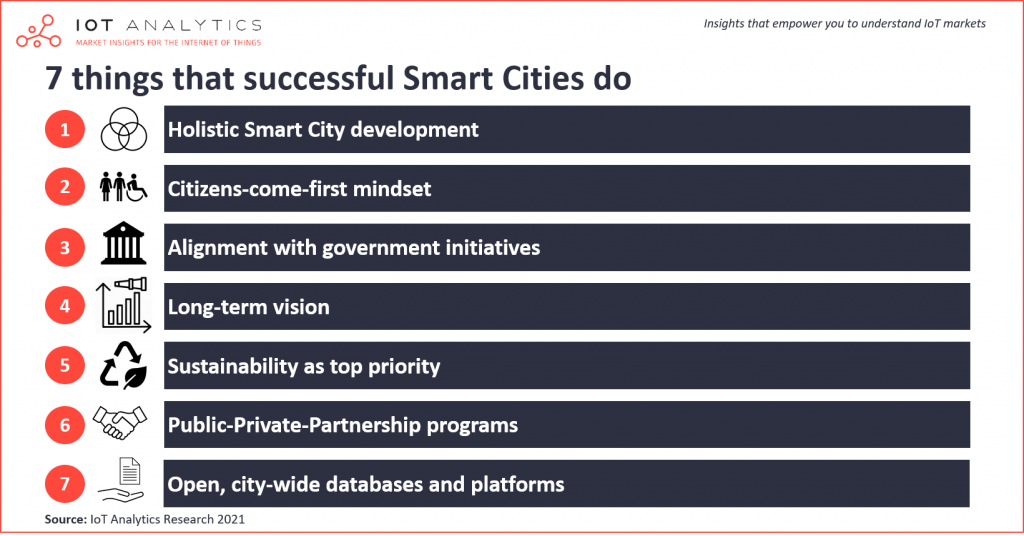 The chances are slim that any municipality will achieve the system-of-systems vision without extensive citizen engagement. As Brügge observes, “Successful smart cities of the future [will] exhibit a citizen-oriented approach by developing infrastructures that connect and enable citizens to become co-creators of their future city.” Members of the Forbes Technology Council also see citizen engagement as critical to smart cities movement. For example, Luke Wallace (@lukeluca), Director of Engineering at Bottle Rocket, believes, “Civic engagement will skyrocket once cities can provide data digitally. Social media accounts that automatically notify everyone about zoning changes, voting information and public hearings would get more people involved immediately. When more information is available in more ways, people will want to get more involved to have the decisions reflect their own beliefs.”

Vivek Ahuja, Chief Technology Officer at Sofbang LLC, sees civic engagement more in terms of customer service than social media. He explains, “I’m optimistic that smart cities will help municipalities begin to view their citizens through more of a customer-/user-experience lens. With a data-driven view of people’s daily habits, needs, desires and frustrations, governments can be of greater service to their communities than ever before, catching up to the customer service evolution that’s already taken place in the marketplace.” Some people may be a bit creeped out by that perspective. I’m not sure citizens want the government to know their “daily habits, needs, desires and frustrations.” On the other hand, Laureen Knudsen, Chief Transformation Officer at Broadcom, sees customer service in a more practical light. She says, “I’m hoping for more automation of city services and the ways you do business with cities. Automated permitting, online business licenses and resale licenses should be the norm. I’m hoping that for a city to be considered ‘smart’ its leaders will be required to apply lean principles to all areas, increasing efficiency for all and effectiveness for the city.”

Mitchell Hughes (@MitchViZZ), CEO and President of ViZZ, writes, “Most people, when they think of smart cities, probably think of science fiction; Big Brother’s telescreens in George Orwell’s 1984, or retinal scanners in convenience stores a la Demolition Man. But the reality of the smart city in the real world is far more benign, with an emphasis on technologies that power the infrastructure of the city itself. … However, somewhere soon, the smart city as we know it today will begin to take siloed systems and connect them, integrating infrastructure around us with our devices, our online data and ultimately our lives.”[6] Integrating “our lives” into the smart city can sound a bit Orwellian. However, Garrett Ungaro, Revenue Leader at LoginRadius, believes future smart cities will be much more benign and citizens will actually demand the services they can provide. He writes, “As digital transformation transforms everyday life and interactions, cities are looking for ways to offer their services through online platforms. Cities are becoming ‘smarter’ not to jump onto the technology bandwagon but in order to increase citizen engagement and serve them better. Residents are accustomed to 24/7, anywhere access to consumer products and services, and this expectation has bled over into government and municipal services.”[7] It will be up to urban leaders to convince citizens that their efforts are going to provide a service society not a surveillance society.