In several past posts, I have discussed products and designs related to the trucking industry that are aimed at reducing fuel costs and increasing efficiency (see, for example, Reducing the Operating Costs of Truck Transportation, Update: Reducing the Operating Costs of Truck Transportation, and Latest Developments Aimed at Improving Truck Operating Costs). This post is a continuation of those discussions. One topic that continues to garner attention is the growing interest in natural gas-powered engines. Scott Perry, a vice president at Ryder Systems Inc., told Rebecca Smith, “The economics favoring natural gas are overwhelming.” [“Will Truckers Ditch Diesel?” Wall Street Journal, 23 May 2012] Smith continues:

“The shale gas revolution, which cut the price of natural gas by about 45% over the past year, already has triggered a shift by the utility industry to natural gas from coal. Vast amounts of natural gas in shale rock formations have been unlocked by improved drilling techniques, making the fuel cheap and plentiful across the U.S. Now the shale-gas boom is rippling through transportation. Never before has the price gap between natural gas and diesel been so large, suddenly making natural-gas-powered trucks an alluring option for company fleets, rather than an impractical idea pushed mainly by natural-gas boosters like T. Boone Pickens, the Texas oilman. Railroad operators also are being affected as coal shipments decline. Many fleet operators, particularly long-haul truckers, remain concerned about a scarcity of refueling stations. Other challenges include the bulky tanks for compressed gas and the hazards of handling liquefied gas. In the past, the volatility of natural-gas prices also hampered wider use.”

The availability of refueling stations for long-haul truckers is about to become less of a concern. For more on that topic, read my post entitled Natural Gas Usage in Trucking Sector on the Rise. Not all of the attention is being devoted to LNG-powered engines. Companies continue to work on making diesel engines more efficient as well. “For the last decade, diesel technology has undergone a fundamental transformation to near zero emissions,” according to Allen Schaeffer, Executive Director of the Diesel Technology Forum. [“Clean Diesel Technology To Help Achieve EPA’s New Soot Standards Under Clean Air Act,” PR Newswire, 15 June 2012] According to Schaeffer, this technology is “based on ultra low sulfur diesel fuel, advanced clean-burning engines and new emissions control technology.”

Also in development are systems that help operators drive more efficiently. For example, Mercedes-Benz Actros tractor unit uses Daimler’s GPS-enabled Predictive Power Control “to see” upcoming hills. “This will allow it to automatically change gears before the going gets tough, resulting in fuel savings of up to three percent over moderately difficult topography.” [“Daimler’s Predictive Power Control “sees ahead” to help trucks save fuel,” by Ben Coxworth, Gizmag, 23 May 2012] GPS is also being used to help companies plan more efficient routes in order to save time and money. Steve Banker notes:

“Standard routing solutions input data—such as the number of trucks in a fleet, truck characteristics (e.g., truck height, weight capacity, cube-out capacity), and customer delivery points—into complex optimization algorithms to determine the ‘best’ route plan for the fleet in terms of minimizing the miles traveled or the time it will take to complete the deliveries. Existing routing solutions are excellent at minimizing distance, but they are less effective at minimizing delivery time because they don’t contain ‘real-world’ data—i.e., they lack data on the true average speed per hour traveled on particular sections of road, at different times of the day and week.” [“Route Planning Based on Real-World Data,” Logistics Viewpoints, 29 November 2010]

Banker pointed out that the “delivery time” problem was being addressed in the United Kingdom by a company called PostcodeAnywhere. “The company introduced a new routing solution for private fleets that uses real-world data from tens of thousands of customers driving with TomTom devices in the UK.” Rand-McNally recently introduced a new GPS navigational device for professional drivers that has “Wi-Fi connectivity, which enables the transmission and display of weather as well as other real-time information. The Wi-Fi feature was designed so that drivers can connect by using their enabled smart phones as Wi-Fi hotspots – allowing for real-time updates while on the road.” [“Wi-Fi connectivity, enhanced truck routing, and new hardware platform provide more durability and features than ever before,” PR Newswire, 7 June 2012] In the press release about the new device, Dave Muscatel, CEO of Rand McNally, stated, “We understand the unique challenges unforeseen weather presents for professional drivers. Our new weather solution will enable drivers to proactively manage this issue.”

While a GPS-enabled Predictive Power Control system or a GPS routing system may be a welcomed addition to a tractor cockpit, other electronic monitoring devices are receiving less enthusiastic support. Electronic onboard recording devices (or EOBRs) can be used to “make roads safer by incentivizing better, more patient driving and help the environment by reducing CO2 emissions.” [“‘Big Brother’ takes the wheel,” by Paul J. Davies, Financial Times, 16 January 2012] Admit it, nobody likes to think that their every move is being monitored. That’s basically what an EOBR does. Normally such devices consist “of a mobile GPS locator for place and time, an accelerometer to capture g-force measurements and a chip to collect these data and speed measurements.” Geoffrey Finlay, chief executive of Lysanda, a company that sells EOBRs, “says his company’s main selling point has been emissions measurement through analyzing driver behavior and the promise of fuel-cost savings. ‘Small changes to driving style can mean 15-20 per cent savings in fuel economies without impacting driving times,’ he says. The technology does have a basic problem from the consumer side – there is a touch of’ ‘Big Brother’ about it, as Mr Patel admits.” Nevertheless, a 15-20 percent savings in fuel costs for some drivers is nothing to sneeze at.

Another technology that is being developed and implemented is the hybrid diesel-electric powertrain. In fact, earlier this year Volvo’s “Mean Green” truck established a new world speed record for a hybrid truck at 147.002 mph over a timed course. Volvo’s “hybrid drive system [is] being used by hundreds of Volvo buses throughout the world, including London’s double-decker buses.” [“Volvo claims World Hybrid Truck speed record,” Gizmag, 6 May 2012] In Germany, Siemens is testing a different diesel/electric hybrid drive system — one that uses overhead cables to draw electricity. Siemen’s system is “based on proven railway and tram technology but has been adapted for trucks on roads. Heavy goods vehicles have been fitted with a newly-developed pantograph that can automatically raise to meet overhead cables and transfer electric power to hybrid diesel/electric power trains. Energy recovered from regenerative braking can also be fed back into the system for re-use by other vehicles.” [“Siemens tests “eHighway of the Future” vision with tram-like overhead cables,” by Paul Ridden, Gizmag, 23 May 2012] Although such a system clearly has potential, it is dependent upon the building infrastructure that does not currently exist.

If you want to get really radical about the future of trucking, however, you need look no further than “the full tractor/trailer combo … known as Innotruck.” [“Radical Innotruck showcases emerging transport technology,” by Ben Coxworth, Gizmag, 18 April 2012] The Innotruck “is part of Technische Universität München (Technical University Munich)’s Diesel Reloaded project, which ‘aims to demonstrate how paradigm shifts in automotive, energy, and information technologies can help to address major societal trends and needs.” Coxworth reports that the “Innotruck is intended to serve as both a testbed and a demonstration vehicle for a number of emerging technologies. These include drive-by-wire operation, car-to-car and car-to-infrastructure communications, and plug-and-play applications.” The Innotruck is an electric vehicle that uses “onboard solar cells, wind turbines and regenerative brakes” to generate the energy required to power the vehicle. As you can see from the attached picture, it also has what Coxworth calls an “eye-popping” design. 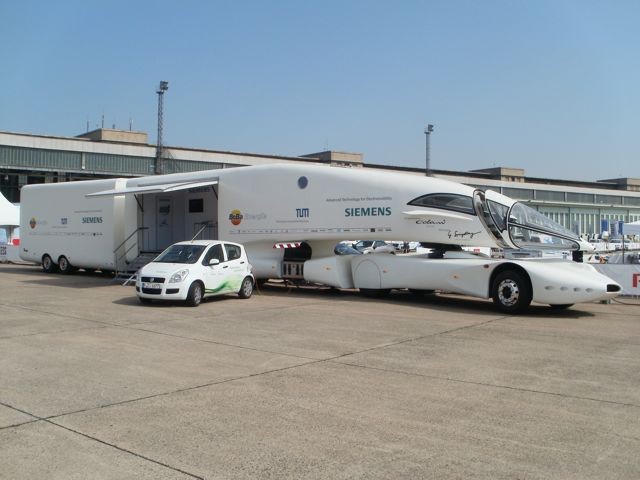 Although I don’t expect to see radical vehicles like the Innotruck rolling down interstate highways anytime in the near future, other technologies mentioned above are already becoming more commonplace.