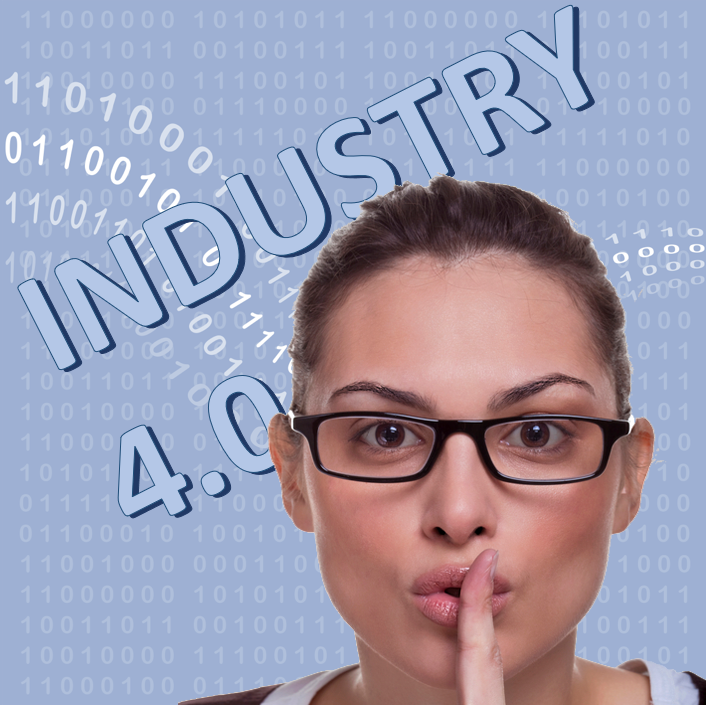 I suspect most peoples’ idea of revolution involves unrest, turmoil, distress, and chaos as old orders are overthrown and new orders are put in place. Most analysts believe we are in the midst of new revolution — the fourth Industrial Revolution (aka Industry 4.0). If you’re not in the manufacturing sector, you may not have heard about Industry 4.0. It seems to be a fairly quiet revolution. Some people may even question if a revolution is taking place at all. For example, analysts from Sciforce write, “We see that the revered self-driving cars, virtual reality and even AI itself are still in their infancy and will remain there for years. And yet we hear a lot about the 4th Industrial Revolution. So is the world changing or is it just a fantasy?”[1] According to Ashwin Kshirasagar, “The term Industry 4.0 was coined by the BMBF in Germany (Federal Ministry of Education and Research), which was a project by the German government to focus on the digitization of the manufacturing industry.”[2] It makes perfect sense that manufacturing, like other industries, must adapt to the digital age; however, manufacturers that are adapting are doing it methodically.

Analysts from the Boston Consulting Group (BCG) explain the first three revolutions were driven by steam, electricity, and automation. They write, “Industrial production was transformed by steam power in the nineteenth century, electricity in the early twentieth century, and automation in the 1970s.”[3] The fourth revolution is being driven by data. The BCG analysts explain, “Today, another workforce transformation is on the horizon as manufacturing experiences a fourth wave of technological advancement: the rise of new digital industrial technologies that are collectively known as Industry 4.0.” Some pundits believe Industry 4.0 is more evolutionary than revolutionary since computers were the foundation of the last revolution and remain the foundation of Industry 4.0. Other analysts, however, believe Industry 4.0 is revolutionary because of the convergence of numerous technologies, not a single technology. In fact, there seems to be a dizzying array of new technologies confronting manufacturers.

Nigel Duckworth (@nigelduckworth), a marketing strategist at One Network Enterprises, notes it can be difficult for manufacturers to decide amongst the swirl of new technologies vying for attention. He recommends manufacturers move cautiously as they join the revolution. He explains, “Besieged by bright shiny objects of Industry 4.0, manufacturers should focus on long term goals instead of being swept up by the abundance of new technologies, such as cloud, big data, IoT, mobile, location, additive manufacturing, edge computing, miniaturization, augmented and virtual reality, artificial intelligence (AI), automation, and robotics.”[4] Nevertheless, manufacturers shouldn’t move too slowly or they risk being left behind. The Sciforce staff reports the World Economic Forum studied “the world’s smartest factories when it comes to adopting industrial IoT (IIoT) technologies” and found “these companies have created factories that have 20–50% higher performance and create a competitive edge. They have certain common things: agile teams with domain, analytics, IoT and software development expertise; [and] a common data/IoT platform.”

The late Buckminster Fuller once said, “You never change things by fighting the existing reality. To change something, build a new model that makes the existing model obsolete.” Digital Age technologies are, for the most part, making Industrial Age manufacturing models obsolete. Keith Higgins, Vice President of Digital Transformation at Rockwell Automation, explains, “A world of interconnected data has changed the way we live and work. Data from connected equipment, lines, processes and facilities is pouring into factories — and the information locked in these data streams has transformed how industrial organizations manage operations, solve issues and adapt to change.”[5] Industry 4.0 embraces a new ecosystem that includes sensors on one end, cognitive technologies on the other, connected by the Internet of Things (IoT). Daniel Riedel, CEO of New Context, explains, “The true wonder of the fourth industrial revolution won’t be the data produced; it will be intelligent machines’ capacity to analyze those data and communicate their findings within a network of similarly intelligent machines. Then, each connected machine will act, altering its processes to be more efficient and communicating those changes back to its network.”[6]

Michelle Knight observes, “Industry 4.0, a revolutionary business model driving decentralized distribution and production with data, promises high expectations for companies. This up-and-coming model combines leading and emerging technologies through each business process, from product conception to the physical item or service reaching the customer. Understanding the intricacies of Industry 4.0 can be tricky for many company leaders. [According to a McKinsey study,] close to 70% of companies have initiated Industry 4.0 prototypes struggling to gain traction and ‘less than 30% of manufacturing companies are actively rolling out Industry 4.0 at scale.'”[7] You might have noticed that both Riedel and Knight write about future benefits of Industry 4.0. In their determination, Industry 4.0 is a revolution yet to succeed. The TechStartups team believes the revolution is about to speed up. The team writes, “Industry 4.0 initiatives are driving massive change across a wide number of industry verticals with an emphasis on improving processes, resource utilization, and productivity. The manufacturing industry, in particular, is rapidly transforming as technology, competition, and the evolving demands of global consumers dictate the need for continuously improving efficiencies and flexibility. The manufacturing industry is rapidly transforming from just-in-time build to just-in-time data to determine production needs in real-time. While there are many technologies involved in this transformation, there are a few that are especially important to the industry including 5G, Artificial Intelligence, Big Data Analytics, Blockchain, Cloud and Edge Computing, Cybersecurity, Immersive Technology (such as Virtual Reality), Internet of Things, and Robotics.”[8]

Sciforce analysts conclude, “Industry 4.0 will deliver productivity gains and transform the future of manufacturing, but we are still at the beginning of the journey. The confluence of technologies will shift manufacturing away from its quest for the lowest labor cost towards more personalized, automated, and localized value chains, based on customer needs.” Knight adds, “Data will continue to drive Industry 4.0 into a new business mindset. … Industry 4.0 will not happen overnight, but companies can lay the groundwork and be ready for when it accelerates.” Analysts generally agree Industry 4.0 will accelerate, despite some current challenges; when it does, manufacturers failing to join the revolution will find themselves eating the dust of their data-driven competitors. It’s time to make some noise.