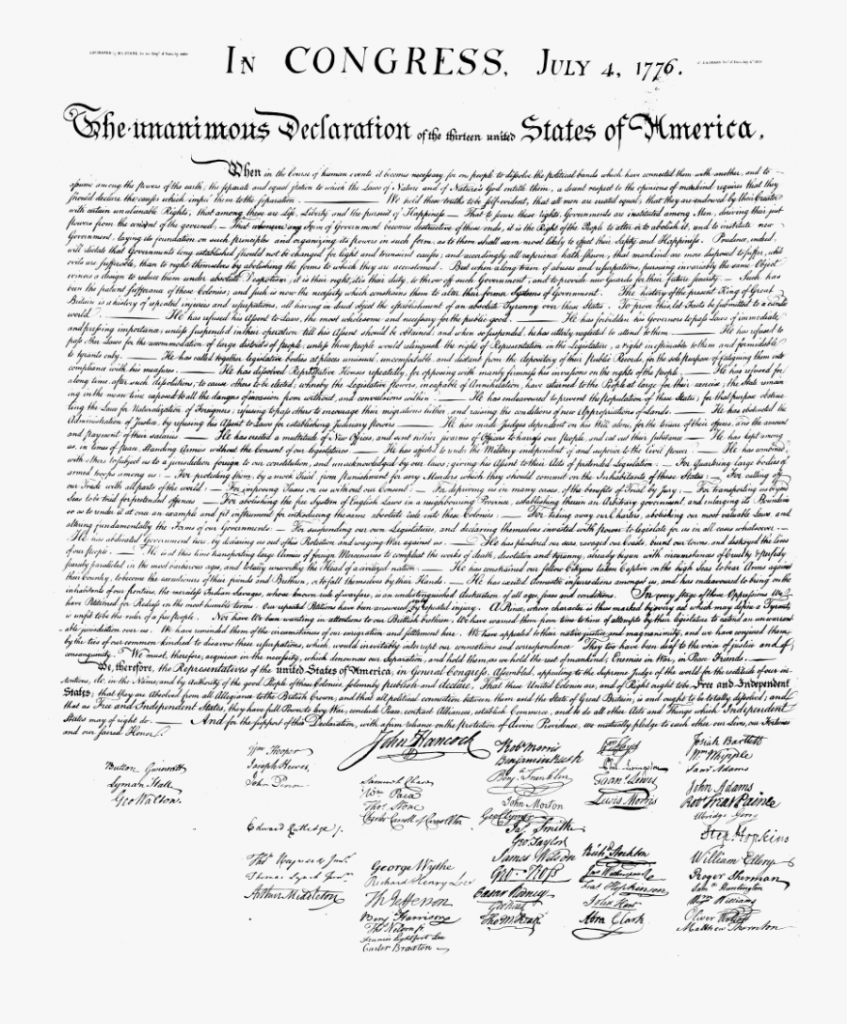 Independence Day marks the adoption of the Declaration of Independence on July 4, 1776 — a document declaring the American colonies’ independence from Great Britain. For the most part, the document was a finger-pointing exercise explaining why the American colonies wanted to be independent from Great Britain. It declares, “The history of the present King of Great Britain is a history of repeated injuries and usurpations, all having in direct object the establishment of an absolute tyranny over these states. To prove this, let facts be submitted to a candid world.” What follows is a litany of complaints against King George III. Among the grievances, the Declaration declares, “He has abdicated government here, by declaring us out of his protection and waging war against us. He has plundered our seas, ravaged our coasts, burned our towns, and destroyed the lives of our people.” Lin-Manuel Miranda captured the love/hate relationship with Great Britain and the monarchy in his famous song from “Hamilton” entitled “You’ll be back.” In that song, King George sings:

You’ll be back like before
I will fight the fight and win the war
For your love, for your praise
And I’ll love you till my dying days
When you’re gone, I’ll go mad
So don’t throw away this thing we had
Cuz when push comes to shove
I will kill your friends and family to remind you of my love

The Declaration of Independence, primarily penned by Thomas Jefferson, basically informed King George that if he looked back at his past actions, he would understand what motivated the colonies to declare independence. The document tried to provide the King with 20/20 hindsight. The Merriam-Webster Dictionary says 20/20 hindsight refers to “the full knowledge and complete understanding that one has about an event only after it has happened.” Independence Day 2020 reminds us that hindsight is not always perfect. As the United States wrestles with three crises (coronavirus, economic recession, and racism), we have a general, but not complete, understanding of how we arrived here. There are fingers pointing in many different directions. Today would be a good day to stop pointing fingers at the past and start pointing them toward the future. Jefferson knew pointing to past grievances was insufficient motivation to rouse citizens of the colonies to action. For that reason, he made sure the Declaration of Independence was not just a finger-pointing exercise. It was also a declaration of beliefs. The document states, “We hold these truths to be self-evident, that all men are created equal, that they are endowed by their Creator with certain unalienable rights, that among these are life, liberty and the pursuit of happiness. That to secure these rights, governments are instituted among men, deriving their just powers from the consent of the governed.”

As current events have shown, we have not yet lived up to those ideals. Nearly six decades ago, during the March on Washington, Dr. Martin Luther King, Jr., stood on the steps of the Lincoln Memorial and gave his famous, “I have dream” speech. During that speech, he stated, “In a sense we’ve come to our nation’s capital to cash a check. When the architects of our republic wrote the magnificent words of the Constitution and the Declaration of Independence, they were signing a promissory note to which every American was to fall heir. This note was a promise that all men, yes, black men as well as white men, would be guaranteed the unalienable rights of life, liberty, and the pursuit of happiness. It is obvious today that America has defaulted on this promissory note insofar as her citizens of color are concerned. Instead of honoring this sacred obligation, America has given the Negro people a bad check, a check which has come back marked insufficient funds. But we refuse to believe that the bank of justice is bankrupt. We refuse to believe that there are insufficient funds in the great vaults of opportunity of this nation. And so we’ve come to cash this check, a check that will give us upon demand the riches of freedom and the security of justice.”

Nearly six decades later, Dr. King could make the same claims concerning the three crises noted above. All three of the crises have had severe impacts on communities of color. The Center for Disease Control (CDC) notes, “The effects of COVID-19 on the health of racial and ethnic minority groups is still emerging; however, current data suggest a disproportionate burden of illness and death among racial and ethnic minority groups.”[1] The CDC explains living conditions, working conditions, and health conditions all contribute to this disproportionate burden. The CDC notes, “For many people in racial and ethnic minority groups, living conditions may contribute to underlying health conditions and make it difficult to follow steps to prevent getting sick with COVID-19 or to seek treatment if they do get sick.” At the same time, they note, “The risk of infection may be greater for workers in essential industries who continue to work outside the home despite outbreaks in their communities, including some people who may need to continue working in these jobs because of their economic circumstances. Nearly a quarter of employed Hispanic and black or African American workers are employed in service industry jobs compared to 16% of non-Hispanic whites.” Finally, the CDC notes, “Existing health disparities, such as poorer underlying health and barriers to getting health care, might make members of many racial and ethnic minority groups especially vulnerable in public health emergencies like outbreaks of COVID-19. … Compared to whites, Hispanics are almost three times as likely to be uninsured, and African Americans are almost twice as likely to be uninsured.” The CDC concludes, “Stigma and systemic inequalities may undermine prevention efforts, increase levels of chronic and toxic stress, and ultimately sustain health and healthcare disparities.”

Following Memorial Day weekend, COVID-19 cases spiked in nine states. America runs the risk of a similar spike following this weekend’s holiday. Skyrocketing infection rates are not the types of fireworks we want to experience. Please be careful this weekend and keep yourself safe. We are all anxious to recover from the pandemic, from the recession, and from racism; however, we need to be smart about how we proceed. The Declaration of Independence concludes, “For the support of this declaration, with a firm reliance on the protection of Divine Providence, we mutually pledge to each other our lives, our fortunes and our sacred honor.” By pledging our lives, our fortunes, and our sacred honor to each other, Americans can make the future a brighter one for everyone.