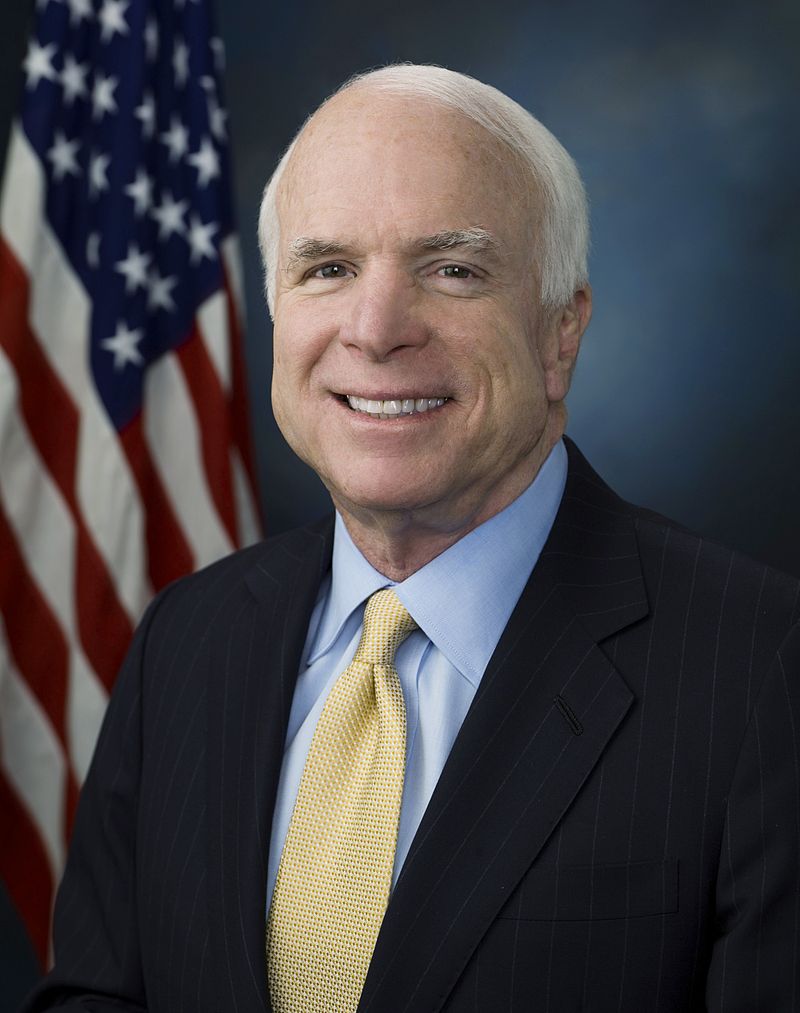 There are too few heroes in this world and it just lost one of them.

Some people might have withered trying to live up to the legacy of a father and grandfather who were the first father/son duo to be promoted to the rank of four-star Navy admirals. Senator John McCain, however, was a fighter and iconoclast whose reputation eventually surpassed those of his star-studded ancestors (one of whom served as an aide to General George Washington in the War for Independence). Senator McCain followed his father and grandfather into the Navy; but, his career was cut short when, in 1967, his fighter jet was shot down over North Vietnam. He suffered broken arms and a broken leg during the incident and his poor treatment and lack of medical care during five and half years of captivity left him with permanent physical damage.

As a result, McCain turned from military service to political service. In October 2017, he told midshipmen at the Naval Academy he had spent his entire adult life serving the American people “sometimes unwittingly and often imperfectly.”[1] But that service “gave him a sense of purpose and honor.” He added:

“Even in the worst of times — and they come for most of us — you’ll know that to serve this country is to serve its ideals, the ideals that consider every child on Earth as made in the image of God and endowed with dignity and the rights to life, liberty and the pursuit of happiness. It is a noble cause. It is your cause, and it’s worth living and dying for.”

Most observers are quick to note that McCain didn’t serve quietly. In tribute, award-winning journalist Karen Tumulty wrote, “A man who seemed his truest self when outraged, Sen. McCain reveled in going up against orthodoxy. The word ‘maverick’ practically became a part of his name. Sen. McCain regularly struck at the canons of his party. He ran against the GOP grain by advocating campaign finance reform, liberalized immigration laws and a ban on the CIA’s use of ‘enhanced interrogation techniques’ — widely condemned as torture — against terrorism suspects.”[2] He spoke truth to power until the very end.

Senator McCain won the Republican Party nomination for President of the United States in 2008. He opposed the eventual winner Barack Obama. During that campaign the Senator’s character was on full display. Pulitzer Prize winner Robert D. McFadden, reports, “At some McCain rallies, vitriolic crowds disparaged black people and Muslims, and when a woman said she did not trust Mr. Obama because ‘he’s an Arab,’ Mr. McCain, in one of the most lauded moments of his campaign, replied: ‘No, ma’am. He’s a decent family man, a citizen that I just happen to have disagreements with on fundamental issues.'”[3] President Obama paid tribute to his one-time opponent saying, “Few of us have been tested the way John once was, or required to show the kind of courage that he did. But all of us can aspire to the courage to put the greater good above our own. At John’s best, he showed us what that means.”[4]

Today, I was discussing Senator McCain’s leadership and character with Major General Nolan Sklute, USAF (retired), my company’s General Counsel. I mentioned to Nolan that the Senator’s laudatory attributes (e.g., ethical leadership, country-before-person, sense of purpose, and moral clarity) are essential in both the public and private sectors. I’ve always appreciated those characteristics in veterans with whom I’ve dealt. When we first launched Enterra, retired Admirals, Generals and Naval Officers (like Adm. Stephen Chadwick, Dennis Haley, General Nolan Sklute, General John Phillips, and Admiral Harry Ulrich) were amongst our earliest investors. All of these men exhibited many of the same leadership and behavioral attributes as Senator McCain. During these early years, the colleagues of these former military officers with whom we interacted (such as Admiral Richard Mies at SAIC), also exhibited the same leadership attributes as the late Senator. Being in the presence of these persons, even as a generationally younger CEO of an emerging technology company, was both inspirational and instructive. Their examples and actions illustrated to me how to run a business and interact with others. The training these leaders received through the military instilled within them a sense of purpose, ethics, and code of conduct that are sorely needed in today’s changing and tumultuous times. Senator McCain never forgot his military training or failed to follow the moral compass that training instilled.

Most of headlines following his death noted that John McCain was a war hero. His heroism, however, goes far beyond the courage he showed in battle and captivity. The late, great tennis star Arthur Ashe may have said it best, “True heroism is remarkably sober, very undramatic. It is not the urge to surpass all others at whatever cost, but the urge to serve others at whatever cost.”[5] Senator McCain did just that — he served others to very end. He lived and died a hero.