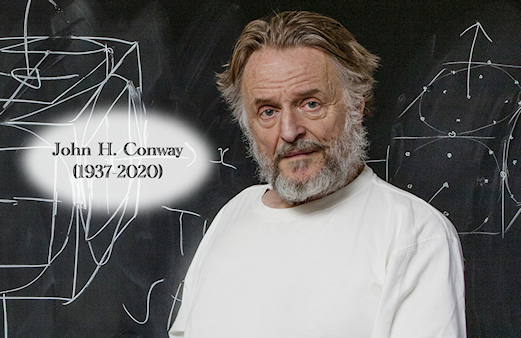 Among the many tragic stories coming out of the novel coronavirus pandemic is the death of John Horton Conway, a former John von Neumann Professor of Applied and Computational Mathematics at Princeton University. He died from Covid-19 on 11 April 2020. Before I describe Professor Conway’s illustrious career, let me recall a few personal remembrances about this brilliant and kind man. I did not know Professor Conway well; however, I met and chatted with him several times over the years. Our chats weren’t on Princeton University’s campus We met in social settings having coffee — usually at Panera Bread on Nassau Street across the street from the University. Chatting over coffee is a social ritual in Princeton; and, the town has no shortage of small coffee shops where many interesting conversations can be overheard or joined. It is in this setting I met Professor Conway.

He was always a very friendly, obviously brilliant, man, who was like everyone’s wise grandfather — approachable and easy to chat with whether the topic was scientific or ordinary activities of life. I recall one such chat when my colleague, Caleb Bastian, and I were discussing setting up the office of our applied mathematics company at One Palmer Square. Professor Conway overheard us discussing the acquisition of blackboards for the walls of our office so our applied mathematicians could work in an environment with a similar look and feel to that of Princeton’s Fine Hall where they studied. Professor Conway chimed in saying, “Stop thinking like ‘old men’ and get with the times. Acquire blackboard paint you can apply to the walls of your office.” Professor Conway advised us that blackboard paint would be less expensive to procure and easier to apply than real blackboards. What followed was a 30-minute conversation with a world-class, brilliant mathematician focused on the pros and cons of blackboards vs blackboard paint. This is the type of kind, neighborly behavior exhibited by a one-of-kind, scholarly, man-about-town in Princeton.

Professor Conway was born in Liverpool, England, the day after Christmas in 1937. His biographer, Siobhan Roberts (@sioroberts), once called Professor Conway “the world’s most charismatic mathematician.”[1] Describing the day he set off for the University of Cambridge, she writes, “[He was] a skinny 18-year-old, with long, unkempt hair — a sort of proto-hippie — and although he generally preferred to go barefoot, on this occasion he wore strappy Jesus sandals. He traveled by steam train from Liverpool to Cambridge, where he was to start life as an undergraduate.” From his inauspicious beginning as a hippie-type with unkempt hair, Professor Conway eventually received his B.A. (1959) and Ph.D. (1962) from the University of Cambridge.

He began his academic career as a Lecturer in Pure Mathematics, then became a Reader, and finally, a Professor at the University of Cambridge before he joined Princeton University in 1987. Conway’s genius was often recognized. He received the Berwick Prize (1971), was elected a Fellow of the Royal Society (1981), was the first recipient of the Pólya Prize of the London Mathematical Society (1987), won the Nemmers Prize in Mathematics (1998) and received the Leroy P. Steele Prize for Mathematical Exposition (2000) from the American Mathematical Society. In 2017 Conway was given honorary membership of the British Mathematical Association. His 1981 nomination to the Royal Society reads: “A versatile mathematician who combines a deep combinatorial insight with algebraic virtuosity, particularly in the construction and manipulation of ‘off-beat’ algebraic structures which illuminate a wide variety of problems in completely unexpected ways. He has made distinguished contributions to the theory of finite groups, to the theory of knots, to mathematical logic (both set theory and automata theory) and to the theory of games (as also to its practice).” When Roberts learned of his death, she told CNN, “With more than 60 years of research, Conway discovered the concept of surreal numbers and invented one of the first computer games, ‘The Game of Life’.”[2]

Facts about a person’s life can never capture the real person; although, we occasionally catch of glimpse of their motivating spirit. In 1993, Gina Kolata (@ginakolata) provided such a glimpse when she wrote, “Dr. John H Conway sits down at his computer and gets ready to log on. But before the computer allows him to begin work, it quickly spews out 10 randomly selected dates from the past and the future, dates like 3/15/2005 or 4/29/1803. Dr. Conway has to mentally calculate what day of the week each would be before his computer lets him open a file and get to work. It is a game he has rigged up to play with himself.”[3] She added, “His record is 15.92 seconds to calculate all 10 days. But, he modestly says, it is not that hard. ‘It’s the kind of thing autistic kids do.'”

Although Conway began life as an introvert, Roberts reports he made a conscious choice to become an extrovert. According to Roberts, he succeeded dramatically. She wrote, “John Horton Conway [was] perhaps the world’s most lovable egomaniac. He [was] Archimedes, Mick Jagger, Salvador Dalí, and Richard Feynman, all rolled into one. He [was] one of the [world’s] greatest mathematicians, with a sly sense of humor, a polymath’s promiscuous curiosity, and a compulsion to explain everything about the world to everyone in it. According to Sir Michael Atiyah, former president of the Royal Society and arbiter of mathematical fashion, ‘Conway [was] the most magical mathematician in the world.'” The late Sir Peter Swinnerton-Dyer, a colleague of Conway’s at Cambridge, noted, “He was by far the most charismatic lecturer in the faculty. I’m not sure that I can describe how charisma happens. It just is or isn’t. And with most mathematicians it markedly isn’t.” His wife, Diana, whom he married in 2001, saw him in a completely different light. She told Anna Sturla (@anna_sturla), “He was never someone who cared about a person’s pedigree. He just cared about the person.” Professor Conway is survived by his wife and their son Gareth. He is also survived by children from previous marriages: Susan, Rose, Elena, Ann-Louise, Alex, and Oliver.

Like most geniuses, Professor Conway had an unquenchable curiosity about life and how things work. Another Princeton scholar, Albert Einstein, once wrote, “The important thing is to not stop questioning. Curiosity has its own reason for existence. One cannot help but be in awe when he contemplates the mysteries of eternity, of life, of the marvelous structure of reality. It is enough if one tries merely to comprehend a little of this mystery each day.”[4] Roberts believes Professor Conway might have adopted an Oscar Wilde statement as his life’s motto: “Life is far too important to be taken seriously.” No one can say he didn’t take his work seriously; however, those who knew him recognized his love of life. My condolences go out to his family and friends. Rest in peace Professor Conway. 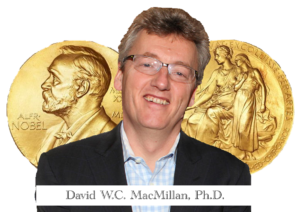 As a former Visiting Professional Executive in Cognitive Reasoning Platforms in Princeton’s Department of Chemistry, I was as thrilled as others associated with Princeton’s chemistry