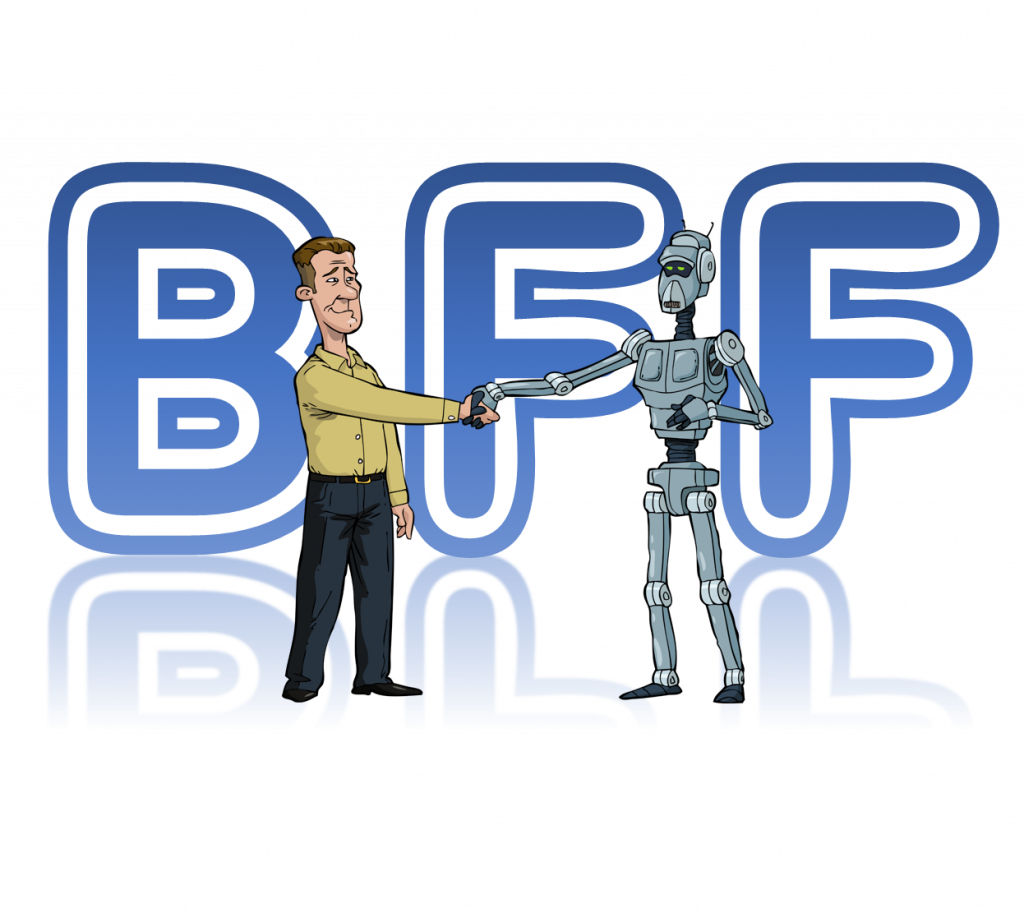 In times past, acronyms were primarily used by military personnel and business consultants. Since the advent of mobile phones and texting, younger generations are using acronyms as texting shorthand. One such acronym is BFF, which stands for Best Friends Forever. Watching your grandmother try to figure out this new language makes you want to LOL — but I digress. With headlines warning us that artificial intelligence (AI) and robotics are going to strip humans of their jobs, you might be wondering how smart machines and humans will ever become BFFs. During a January edition of CBS’ 60 Minutes Scott Pelly interviewed AI expert Kai-Fu Lee. Lee told Pelly, “AI is going to the change the world more than anything in the history of mankind.” Then Lee predicted artificial intelligence, within 15 years, will automate and potentially eliminate 40 percent of jobs now filled by humans.

Putting people in the unemployment line doesn’t sound very friendly. Carmine Gallo (@carminegallo) believes the 60 Minutes‘ segment was too short to elicit the full range of views held by Lee. Gallo says he came away from a separate interview with Lee feeling humans were going to be okay in a world filled with smart machines. “We can thrive like never before,” Lee told Gallo, “if we double-down on those qualities that make us uniquely human. AI is incapable of building trust between two people (or between customers and a company). It cannot inspire teamwork, show passion or exhibit empathy because it has no imagination.”[1] Many analysts have concluded AI and robotics are more likely to augment human intelligence and capabilities than completely replace them. In this augmented world, smart machines may indeed become BFFs with humans.

I don’t want to leave the impression that AI and robotics aren’t going to be disruptive to the workplace. They will be. Redundancies are coming as surely as the next sunrise. What is not clear is whether new jobs created by emerging technologies will outnumber those being lost to those technologies. Like many people, Ritika Puri asks, “What are the consequences to workers who fear losing their livelihoods?”[2] She goes on to note, “Research from the World Economic Forum (WEF) warns, for instance, that AI has the potential to eradicate jobs, such as customer service, administration, and telemarketing that women typically hold. At the same time, the World Economic Forum says that AI could create as many jobs as they displace.” Humans have always had a fear of the unknown and how AI will ultimately impact the workplace is certainly unknown. Another cause of anxiety is that AI discussions seldom distinguish between limited AI systems focused on doing specific jobs and artificial general intelligence which aims to become self-aware and smarter than humans. The latter AI can easily inspire fear, as Hollywood has shown time and again. This lack of clarity is reflected in how people feel about AI. James Vincent (@jjvincent) reports, “A new survey suggests that while there’s no strong consensus on the topic, more Americans are in favor of AI than actively oppose it. In polling organized by the University of Oxford’s Future of Humanity Institute, forty-one percent of respondents said they somewhat or strongly supported the development of AI, while 22 percent said they somewhat or strongly opposed it. The remaining 28 percent said they had no strong feelings one way or the other.”[3]

Disruptions and worker layoffs are never pleasant. Some workers will undoubtedly struggle to find work because they will lack the necessary skills to fill jobs created by new technologies. After all, we don’t even know what those jobs will be. Ryan Petersen (@RyanPete) explains, “School has always been a place to train students for their eventual adult lives. Cultural norms have long dictated the foundation they need to ­survive in ­society and the workforce — reading, writing, math and science. Now, more than ever, that training mission is ­evolving and seems akin to rocketing them into space rather than keeping their feet grounded. That’s because today’s schools are preparing students for careers we haven’t yet imagined. In fact, according to a 2017 report by Dell, 85 percent of the jobs that will exist in 2030 haven’t even been invented yet.”[4] Mark Eccles, General Manager of Gazprom Energy, offers a glimpse into a future in which smart machines and humans collaborate in the workplace. “It’s easy to see why a business’ employees might worry that robots entering the workplace could be the death knell of their career,” he writes. “However, we found quite the opposite. Introducing robotics created benefits for us as a business, and improved the working lives and productivity of our employees too. In fact we discovered that robots can actually lead to positive rather than negative employee engagement.”[5]

Eccles notes that Gazprom’s foray into the human/machine collaboration arena began with robotic process automation (RPA). He explains, “We wanted to speed up repetitive and mundane tasks that were proving time consuming. … We weren’t looking to actually reduce labor costs or headcount as a result. We saw greater merit in RPA releasing staff from burdensome tasks so that they had time to focus on the valuable and more satisfying aspects of their roles.” Relieving humans from the drudgery of dirty, dangerous, or tedious tasks is not the only way smart machines can become BFFs with humans. Jody Medich (@nothelga), Director of Design for SU Labs, talks about cognitive ergonomics helping create superhumans. She explains, “Breakthroughs in perceptual and cognitive computing, especially machine learning algorithms, are enabling technology to process vast volumes of data, and in doing so, they are dramatically amplifying our brain’s abilities. Yet even with these powerful technologies that at times make us feel superhuman, the interfaces are still crippled with poor ergonomics. … If our aim, however, is to create technology that truly extends and amplifies our mental abilities so that we can offload important tasks, the technology that helps us must not also overwhelm us in the process. We must reimagine interfaces to work in coherence with how our minds function in the world so that our brains and these tools can work together seamlessly.”[6] She imagines human/machine interfaces (HMI) that allow human minds to control machines that make humans stronger and faster and even overcome disabilities.

Pamela Hogle (@pam_hogle) agrees cognitive technologies open up myriad ways smart machines can collaborate with rather than replace humans in the workplace. “As cognitive computing evolves, natural language processing engines improve, and areas of AI are combined into new and creative applications,” she writes, “the ways that AI can boost performance on the job are innumerable. Rather than displacing human employees, these technologies could increase employee efficiency and improve productivity.”[7]

Lee told Gallo that despite the very real disruption AI will bring in the near future, “We can choose the ending to this AI story.” MIT’s Erik Brynjolfsson (@erikbryn) agrees with that conclusion. He insists, “Racing with the machine beats racing against the machine. Technology is not destiny. We shape our destiny.”[8] As Lee suggested to Gallo, the best future is a collaborative one in which “we let machines be machines and let humans do what we do best: be human.”