Home » Jobs Sustainability » Here there be Monsters: Jobs and AI 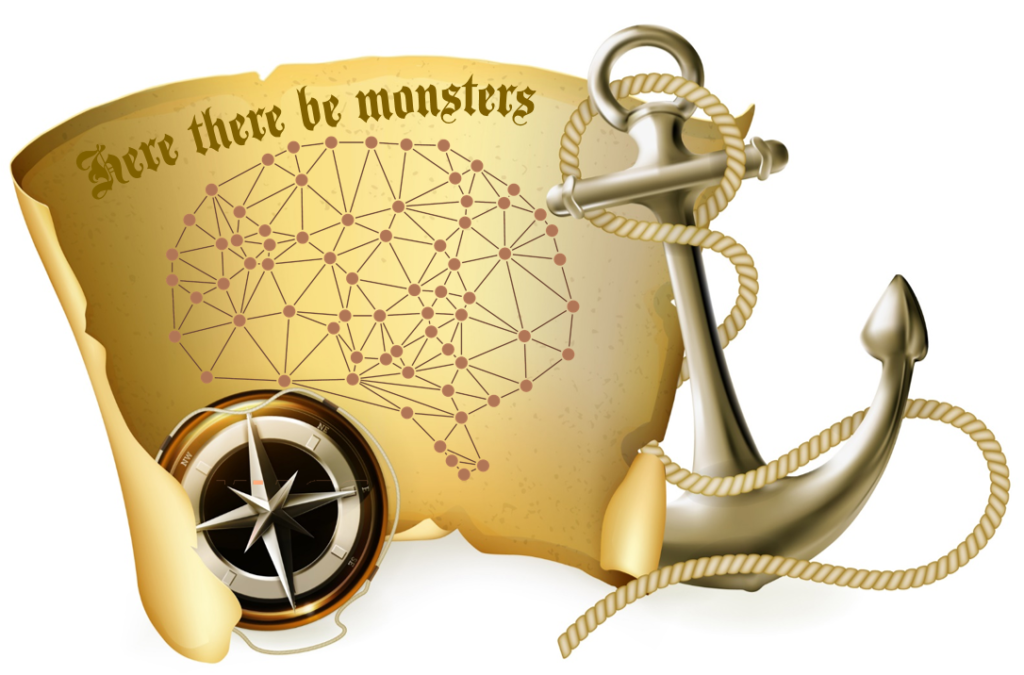 Here there be Monsters: Jobs and AI

Before the world was fully mapped, cartographers would occasionally annotate uncharted areas with sayings like, “Here there be monsters.” The world is headed into uncharted territory as artificial intelligence (AI) and robotics change the business landscape. Like cartographers of old, some pundits are annotating the future work environment with the modern equivalent of “here there be monsters.”

Many people fear the future

Former business executive Jim Vinoski (@JimVinoski) notes, “Breathless headlines predict the end of manufacturing jobs, as robotics and artificial intelligence combine to make human workers obsolete.”[1] AI and robotics combine to create advanced automation solutions and it’s those solutions people fear are going to put them out of work. Tom Allen reports, “The public in many countries think that automation will lead to ‘significant’ job losses and are doubtful about the technology’s impact on efficiency and output, according to a survey by the Pew Research Center. Greece tops the chart, with 91 per cent of the population believing that automation will ‘definitely’ or ‘probably’ replace many jobs currently done by humans in the next 50 years. Japan (89 per cent) and Canada (84 per cent) came next, although most of those respondents thought that it was ‘probably’ likely. After Greece (52 per cent), the ‘definitely’ countries were South Africa (45 per cent) and Argentina (40 per cent).”[2]

The fears people have about jobs sustainability in the years ahead come in two forms. First, fear that more jobs will be taken over by machines than will be created as a result of implementing new technologies. Allen notes, “Few people expect technological advances to create new, better-paying roles: only Canada came close to half of the population believing this (47 per cent). In other countries, only around a third of respondents shared this belief.” The second fear is that even if more jobs are created than eliminated, workers won’t be able to make the transition to a more technically-oriented position. Neither fear can be dismissed out of hand. Technology has historically eliminated jobs; but, historically more jobs have been created by new technologies than have been eliminated. Some pundits believe that historical trend might not continue.

We have a little time to figure out how to craft a future that involves smart machines working side-by-side with humans. Anne Vandermey (@vandermy) observes, “For the time being, at least, American workers are being spared the much-feared job losses from automation. … Even manufacturing has been doing pretty well.”[3] And Jeff Borland, a Professor of Economics at the University of Melbourne, writes, “There is no evidence that the death of work is at present underway.”[4] Borland asserts, “New technologies are likely to substitute for some types of workers, but to be complementary to, and hence increase demand for, other types of workers. Computer-based technologies appear to be complementary to workers who perform non-routine cognitive jobs.” When it comes to AI, I agree with Borland that the most likely future is one in which cognitive technologies augment human intelligence rather than replace it. The term “cognitive computing” was coined by IBM to free augmenting intelligence from the negative aspects of AI constantly driven home by Hollywood movies. The Enterra Solution® entry in this field is the Enterra Artificial Intelligence Learning Agent™ (AILA®), a system that can Sense, Think, Act, and Learn®. People longing for the workplace to remain unchanged are going to be disappointed. Work environments have continually changed throughout history and that trend will not end.

Jobs sustainability in the years ahead

When Borland argues new technologies are primarily going to complement rather than replace most workers, among other things, he means new technologies will take over mundane tasks rather replace entire jobs. Task assumption does appear to be a growing trend. Sara Castellanos (@SCastellWSJ) reports, “Within a few years, humans and machines will work alongside each other to create a so-called workplace revolution that will have significant impacts on human jobs, according to a report released this week from the World Economic Forum. The Future of Jobs 2018 report, released Monday, predicts that by 2025, more than half of all current workplace tasks will be performed by machines, as opposed to 29% today.”[5] As I noted above, the second fear associated with advanced automation is fear workers won’t be able to transition to more technical job positions. University of Massachusetts Lowell professors, Scott Latham and Beth Humberd, insist, “Workers must understand the four paths of job evolution — and the factors behind each path — if they hope to adapt.”[6] The “four paths of job evolution” they describe are “by separately assessing the degree of threat to each profession’s core skill set and value form.” The four paths are:

1. Jobs subject to disruption. Latham and Humberd write, “Disruption occurs when the skills in a job are highly standardized yet the consumer prefers to receive value in the same form. It typically follows a reduction in the production costs of goods or services due to increased efficiency. For example, fast-food workers’ core skill sets are highly threatened by the implementation of self-ordering stations and apps where customers place their own orders. … Although these workers’ skills are threatened, the consumer will continue to receive the same value form.” In this category they place, real-estate agents, legal professionals, and accountants.

2. Jobs subject to displacement. “With displacement,” write Latham and Humberd, “the core skills of a job are deemed obsolete and the value form is irreversibly altered. Toll takers and telephone operators have already experienced displacement, but even highly skilled professions are not immune.” In this category they place pharmacists, librarians, and software developers. They note, “Retraining is often recommended for displaced workers, but that doesn’t always mean more formal education. They should focus on quickly acquiring the most relevant skills in an area with a relatively stable value form.”

3. Jobs subject to deconstruction. “In the case of deconstruction,” Latham and Humberd explain, “the core skill set remains safe, but the value form is threatened.” They place drivers in this category thanks to services like Uber and Lyft. Driving remains important but the value previously inherent in taxi cab drivers has been threatened. Autonomous vehicles threaten to move drivers into the displaced category. They note, “When facing deconstruction, adapt your skills to new value forms. While this sounds easy enough, the biggest impediment is resistance to change. … When a new value form becomes central to consumers’ expectations, you have a choice: acclimate or fade into obsolescence.”

4. Jobs remaining durable. Latham and Humberd write, “Often lost in workforce analyses is the fact that many jobs will remain unchanged for the foreseeable future, including some lower-wage jobs. We refer to jobs as durable when neither the core skill set nor the value form is under significant threat. Electricians and plumbers are highly durable professions because the work is rarely routine and the cost to develop a technology that could deliver value in the same form — hands-on problem-solving — is excessive. Another example is the physician assistant. The skills associated with this job — medical training, insurance industry insight, bedside manner — will likely become more important as broader technological advancements require fewer doctors to treat more patients. Doing much the same work for less money, physician assistants may just disrupt the role of doctors.” They go on to note, “The key for people in durable jobs is to avoid complacency by keeping an eye on tomorrow.”

As the business landscape continues to change, workers must find ways to adapt. A lot of angst will undoubtedly be created in the years ahead as new technologies are implemented in the workplace. Nevertheless, human workers armed with a will to succeed and a willingness to adapt will find they can remain gainfully employed in the years ahead. Like sailors of yesteryear, they will find the places once thought to be filled with monsters are simply new areas to explore.

Footnotes
[1] Jim Vinoski, “Will A Robot Take My Manufacturing Job? Yes, No, And Maybe,” Forbes, 3 September 2018.
[2] Tom Allen, “People in developed and developing nations think that automation will make them worse off,” Computing, 14 September 2018.
[3] Anne Vandermey, “Is automation destroying jobs? Not exactly,” Information Management, 14 September 2018.
[4] Jeff Borland, “Why we are still convinced robots will take our jobs despite the evidence, The Conversation, 25 November 2017.
[5] Sara Castellanos, “By 2025, Machines Will Perform Half of Today’s Workplace Tasks,” The Wall Street Journal, 18 September 2018.
[6] Scott Latham and Beth Humberd, “Four Ways Jobs Will Respond to Automation,” MIT Sloan Management Review, 24 August 2018.