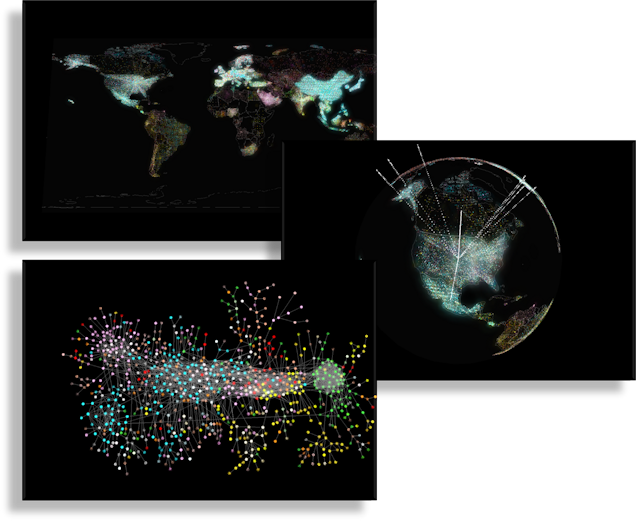 Globalization in the Digital Age

The face of globalization is changing as global trade decreases, reshoring and/or near-shoring increases, and once hot economies cool down. Shawn Donnan (@sdonnan) reports, “Last year saw the biggest collapse in the value of goods traded around the world since 2009 — when the impact of the global financial crisis was at its worst.”[1] No one is anxious to slide once again into deep recession or full-blown depression; but, world leaders are struggling to find answers. That shouldn’t come as a surprise to anyone. The global economy is a complex organism that can’t be easily understood let alone controlled or manipulated. To help you see that complexity, visualization researchers at Harvard University’s Center for International Development have created an interactive data visualization called the Globe of Economic Complexity. Joshua New (@Josh_A_New) writes, “The visualization uses data … on the $15.3 trillion in global exports in 2012 to display which countries produce various goods, as well as where these countries export their goods to. The color-coding of export categories allows users to easily interpret the strength and diversity of various national economies. For example, Algeria shows a fair amount of economic activity, but it is nearly all related to oil production, whereas France exports large amounts of goods across a wide variety of sectors.”[2] As the attached images demonstrate, the visualizations are stunning.

Boston Consulting Group analysts, Hans-Paul Bürkner, Arindam Bhattacharya, and Jorge Becerra, observe, “Globalization is not dead. Rather, it is morphing into a more nuanced and more complex phase, with the inexorable forces that drove the previous phase still very much alive.”[3] The morphing of globalization is a natural consequence of the blossoming of the Digital Age. For millennia, globalization has been based on three flows: the flow of capital, the flow of people, and the flow of resources. Some people add a fourth flow, ideas, to that list. A new flow — the flow of data — has recently joined. McKinsey & Company analysts report, “Digital flows — which were practically nonexistent just 15 years ago — now exert a larger impact on GDP growth than the centuries-old trade in goods, according to a new McKinsey Global Institute (MGI) report, Digital globalization: The new era of global flows.”[4] They continue:

“Although this shift makes it possible for companies to reach international markets with less capital-intensive business models, it poses new risks and policy challenges as well. The world is more connected than ever, but the nature of its connections has changed in a fundamental way. The amount of cross-border bandwidth that is used has grown 45 times larger since 2005. It is projected to increase by an additional nine times over the next five years as flows of information, searches, communication, video, transactions, and intracompany traffic continue to surge. In addition to transmitting valuable streams of information and ideas in their own right, data flows enable the movement of goods, services, finance, and people. Virtually every type of cross-border transaction now has a digital component.”

William Mauldin (@willmauldin) insists one reason world leaders and business executives are having a difficult time grasping globalization’s new landscape is because data flows are not as easily understood as traditional flows. “Compared with goods and services,” he writes, “the economic effect of global data flows is downright nebulous.”[5] Nevertheless, global data flows are increasingly important. Susan Lund (@SusanLund_DC), a partner at the McKinsey Global Institute, told Mauldin, “The Internet is not a luxury for rich people to have, it’s becoming the backbone of the global economy.” The Internet of Things (IoT) will only strengthen that position. As I noted in an earlier article, the IoT is poised to become the central nervous system of the global economy.[6] That means understanding globalization in the Digital Age is becoming increasingly important. Donnan notes, “Barring a spectacular turnround in the global economy, the subpar performance is likely to be repeated in 2016, making it the fifth straight year of lacklustre growth in global trade, a pattern not seen since the doldrums of the 1970s.”[7] Referring to the McKinsey report, Donnan adds:

“A growing number of economists argue that the slowdown is not merely cyclical, but a sign that the forces that have driven globalisation for decades are beginning to shift. The first big transition is China’s attempt to rebalance from a manufacturing and export-led economy towards one focused on domestic consumption. And some economists note that the plateau in worldwide trade in goods and capital has coincided with a surge in data flows — an indicator, they say, that the digital economy of the 21st century is starting to overturn the old order.”

One revolution playing a part in the overthrow of the old order is Industry 4.0 (aka the Fourth Industrial Revolution). Automation and digitization play significant roles in this new revolution and, once again, the Internet of Things is the central nervous system of Industry 4.0. In an earlier article, Donnan discusses some of the trends changing the globalization landscape (such as China’s shift rebalance manufacturing, increased reshoring and near-shoring) and how Industry 4.0 trends could radically alter the global economy.[7] He writes:

“Pair those trends with technological innovations such as ‘additive manufacturing’, or what most of us think of as 3D printing, and the impending March of the Robots, driven by artificial intelligence, and it is hard to imagine a vision of globalisation remaining quite as we imagined. What if one day 3D-printed robots can make their own 3D-printed robots? What happens to world trade then? To Robert Koopman, who took over as the WTO’s chief economist this year, what we are seeing is not so much the end of globalisation but the end of an era of what others have called ‘hyperglobalisation’ that accompanied the emergence of economies such as China’s in recent decades. The data we have on global trade also has huge holes, he says, and is not good enough to assess the growing flows of services or data, or what trade in a new digital world really looks like. ‘I do think we may be missing an important part of the story,’ he says. ‘But we won’t know until we find out how to measure it.’ There is another vision of what is happening and of where we are heading. This holds that we are living through the beginnings of another great age of liberalisation that may in time yield its own boost to global growth and perhaps its own version of globalisation.”

I found it interesting that Koopman believes there is a hidden story that won’t be revealed until we find the patterns that drive the new digital world. Those patterns are likely to be discovered using cognitive computing, which is just beginning to mature. Connected countries are poised to do well in this new world and, as Mauldin concludes, countries lagging in connectivity “may be sacrificing growth potential.”