I have repeatedly asserted that fostering a favorable environment for entrepreneurs is a good way for countries to encourage economic growth and create jobs. The Wall Street Journal recently published an article that informs readers about which countries provide the most favorable conditions to start a business and “and other facts you probably didn’t know about entrepreneurship around the world.” [“The Best Country to Start a Business,” by Jeff May, 15 November 2010]. May begins his column by asking some interesting questions and providing the sometimes surprising answers. He writes:

“What’s the best place in the world to start a business? Denmark.

“What country has the biggest share of women who launch new businesses? Peru.

“Where does it cost the most to start a company? You’ll have to pony up the most money in the Netherlands.

“Where does it take an average of 694 days to clear government red tape and get a company off the ground? Suriname.”

The attached graphic shows the top 71 countries as ranked by the Small Business Administration. Not surprisingly, most of the countries that comprise the first half of the list are developed nations. May indicates that in researching his article, he drew data “from a host of recent surveys [that] show a world that’s brimming with start-up activity, as people from Ireland to Eritrea try to navigate a terrible economy by striking out on their own.” That’s the good news. May also reports that “the surveys … show that many countries could do a lot more to accommodate entrepreneurs.” That’s the bad news. May continues:

“Governments in the developing world, … often impose high costs and numerous procedures on people who are trying to get a company off the ground. In Zimbabwe, entrepreneurs will have to fork over about 500% of the country’s average per-capita income in government fees. Compare that with 0.7% in the U.S. In Equatorial Guinea, owners have to slog through 20 procedures to get their venture going, versus just one in Canada and New Zealand.”

I suspect most of those government fees are simply legalized graft and most of the procedures are aimed at providing jobs for political supporters. As one might expect, the countries ranked highest as places providing a good environment for entrepreneurs also do well in the World Bank’s Doing Business report. For more information on Work Bank report, read my post entitled Doing Business 2010. May drew from that report when he wrote, “Lots of countries are making progress.” He continues:

“In a World Bank study of red tape, Samoa was singled out for making the most strides in reforming its practices. It went from one of the toughest places in the world to start a company last year—131st out of 183—to No. 20 this year.”

“What’s more, some emerging-markets powerhouses like China, Russia, Brazil and India, as well as nations like Chile and the Czech Republic, are due for big improvements, says Zoltan Acs, a Small Business Administration economist and co-author of the agency’s study of entrepreneurial performance around the world. China, for instance, ranks as just the 40th best place in the world to start a company. Yet China and its up-and-coming peers score high on forward-looking measures like expectations for job creation—so they’re likely to catch up fast with more-advanced economies.”

May goes on to report other facts on which the surveys shed light. He writes:

“VENTURE-CAPITAL FUNDING: Israel backs its early-stage companies with the most venture capital, when you look at the amount invested as a percentage of gross domestic product. Slovenia shells out the least.”

An accompanying graphic demonstrates that starting a business isn’t cheap. It costs over $300,000 on average to start a business in the Netherlands (73% more than it costs in the United States). 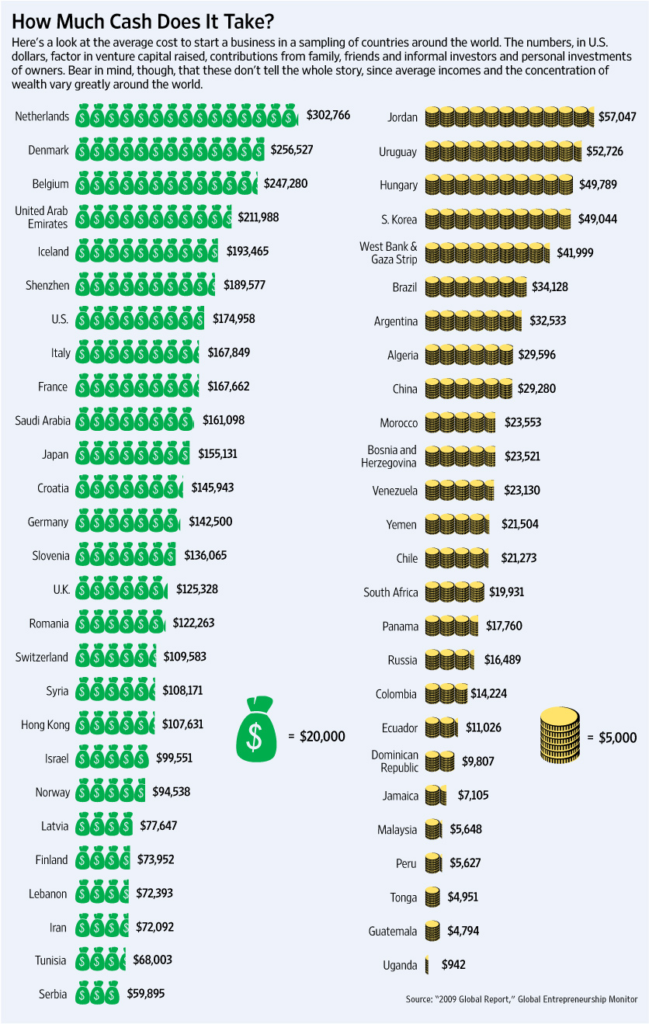 I have pointed out in several past posts that one of the most serious challenges for any entrepreneur is finding enough capital to keep a business viable long enough for it to get established and begin turning a profit. Obviously, the less capital you have to raise the more equity you get to keep as an entrepreneur and less debt you have to pay back. For more information on this topic, read my post entitled The Lean Start-Up. May next turns to another subject of interest to me, women entrepreneurs. He writes:

“PARTICIPATION BY GENDER: In most places, men are more likely to launch businesses than women. The exceptions: Japan, where 5.22% of the country’s women own a small early-stage business versus 3.47% of men, and Peru, where women edge out men 26.06% to 25.74%. In Brazil, it’s a dead heat.”

In a number of posts about micro-finance, I’ve noted that lenders prefer loaning money to women because they have a much better track record for paying loans back. As globalization brings credit and opportunity to impoverished populations, I anticipate that women entrepreneurs will take greater advantage of emerging opportunities. For more on this subject, read my posts entitled Empowering Female Entrepreneurs in the Developing World, Women Entrepreneurs, and Entrepreneurs in Emerging Markets. May concludes his article with a brief description of the kinds of businesses that entrepreneurs are most likely to start. He concludes:

“TYPES OF BUSINESSES: Affluent economies are more likely to launch service firms that cater to the business sector. In Denmark, for instance, B-to-B companies make up 42% of start-ups. Poorer countries tend to churn out a high percentage of consumer-oriented businesses. Consider Guatemala and the Dominican Republic, where more than 74% of start-ups focus on consumers.”

As I noted earlier, in emerging market countries many of the entrepreneurial activities that are being supported through micro-financed loans are businesses started by women. These women tend to start businesses that either make and/or sell items of clothing or grow and sell food products. Anecdotal stories tell of women who start small, grow larger, hire neighbors, put their children into school, move into better housing, feed their families more nourishing meals, and so forth. These types of stories might be most poignant when they concern female entrepreneurs in developing countries, but the same virtuous cycle can be found in both emerging market and developed countries.