Yesterday Enterra Solutions® announced that it has established a Cooperative Research and Development Agreement with Oak Ridge National Laboratory. It took us a year to put this agreement in place and we are excited about what it means. Before discussing those prospects, I have reproduced our press release below:

Enterra Solutions, LLC, and the Oak Ridge National Laboratory (ORNL) announced today that they will jointly produce a next-generation approach to sense and respond to threats and vulnerabilities from weapons of mass destruction and natural disasters. Through a Cooperative Research and Development Agreement (CRADA), ORNL and Enterra Solutions will connect Enterra’s Enterprise Resilience Management Solution to the national laboratory’s SensorNet project. Their efforts will produce an enhanced “sense-think-act” capability called ResilienceNet, which is designed to create a 21st century civilian defense infrastructure.

By integrating Enterra Solution’s Enterprise Resilience Management methodology into the SensorNet architecture, ResilienceNet will provide a “plug-and-play” trusted service for defense, homeland security and critical infrastructure protection applications. To create ResilienceNet, ORNL and Enterra Solutions will automate rules and policies that govern the interactions between users and the information collected by SensorNet’s sensors and intelligent agents. The CRADA is valued at an estimated $5 million over five years.

Enterra’s President and CEO Stephen DeAngelis said, “Since the days of the Manhattan Project, Oak Ridge National Lab has been at the center of cutting edge scientific research in the United States, and this agreement brings together Oak Ridge’s history of innovation and Enterra’s new paradigm for growth and security.” DeAngelis further stated, “Our goal is to build ResilienceNet as a structural component of a next-generation civil defense infrastructure by combining Oak Ridge’s SensorNet technology with Enterra’s Rule Set Automation and Enterra’s Enterprise Resilience Management Solution.”

“The national security threats we face today require the ability to immediately detect changes in an environment and react in real-time by taking the appropriate measures to neutralize the threat,” added Dr. Frank Akers, Associate Laboratory Director for National Security at Oak Ridge. “The research conducted at the Lab and at Enterra will help enterprises in both the public and private sectors do just that.”

“This CRADA with Enterra offers ORNL an auspicious opportunity to make its ongoing research into sensor networks and knowledge discovery available to an emerging leader in business and public safety applications,” said Bryan Gorman, Oak Ridge’s Principal Investigator for the SensorNet CRADA. “We are particularly eager to explore the application of rule set automation to our standards-based SensorNet prototypes.”

This CRADA is another way for Enterra and ORNL to collaborate academically and scientifically. In addition to serving as a visiting scientist at ORNL, DeAngelis has recently established, with the Oak Ridge Center for Advanced Studies, an Institute for Advanced Technologies in Global Resilience. The Institute will establish a center of gravity for Enterprise Resilience Management and provide the venue for leading chemical, nuclear, biological and information technologists, political scientists and business people to join together to explore approaches to critical issues facing the world.

This CRADA is first big step in establishing a framework for an entirely new civilian defense infrastructure. It puts meat on the bones of the system touched on in the December 2006 Esquire magazine article. Oak Ridge’s SensorNet and Enterra’s ResilienceNet are separate, but complementary programs. SensorNet is an ORNL research program that addresses technical challenges associated with real-time sensor systems for national security & other large applications. ResilienceNet, on the other hand, is an intelligent, rule-based sense, think, and act application that enables decision support and secure information sharing based on real-time data sources. This CRADA allows ORNL & Enterra to collaborate to enable advanced ResilienceNet applications to interface with SensorNet interoperability standards. Click on the attached picture for a visual depiction of this relationship. The upper part of the chart represents SensorNet. The portion of the chart below the thick black line represents ResilienceNet. 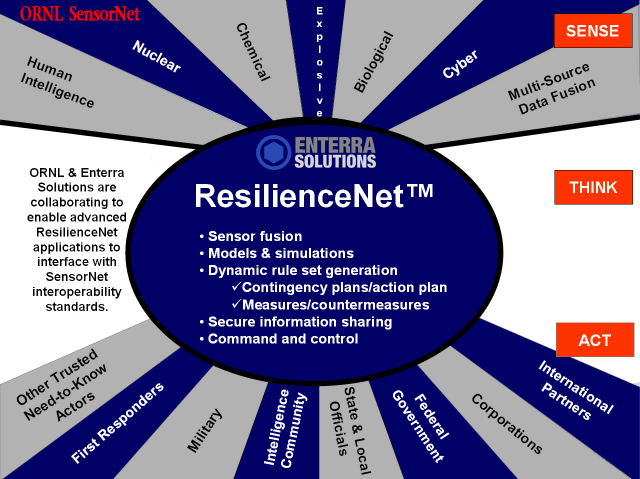 As I noted, this is just the first step towards the development of new civilian defense infrastructure, but it’s a big step. It represents not only a fundamental building block but the foundation for such an infrastructure. The work that will be done by ORNL and Enterra Solutions will lead to a system that will help protect U.S. assets and civilian critical infrastructure. It will permit first responders to be alerted more quickly when something is sensed and permit them to respond faster and more effectively.

We are very excited about this development and hope the work moves quickly. That is one reason we mentioned the Institute for Advanced Technologies in Global Resilience in the press release. We hope our excitement is contagious and motivates others into joining us in helping make America a safer place.