Every year around this time, the World Bank publishes its Doing Business Report. The report ranks 183 countries on how easy (or difficult) it is to do business there. Specifically, Doing Business focuses on 10 topics, “with the specific aim of measuring the regulation and red tape relevant to the life cycle of a domestic small to medium-size firm.” [Doing Business 2010, pp. v and vi] This year New Zealand tops the list as the easiest place to start a business. According to Bloomberg BusinessWeek, “New Zealand officials have just 10 minutes to approve certain documents before their supervisors are notified of the delay” [“The Hassle Factor Across the Globe,” 30 August 2010 print issue]. The report did note, however, that New Zealand passed reforms last year that made it more difficult to get a building permit. On the opposite end of the spectrum is Guinea-Bissau, where it takes an average of 213 days to get approval to start a business. For the fourth year in a row, Singapore is at the top of the “ease of doing business” list. Although one might be tempted to think that Doing Business is a tool only useful to rich business people, the report notes:

“A bigger question is whether the issues on which Doing Business focuses matter for development and poverty reduction. The World Bank study Voices of the Poor asked 60,000 poor people around the world how they thought they might escape poverty. The answers were unequivocal: women and men alike pin their hopes above all on income from their own business or wages earned in employment. Enabling growth—and ensuring that poor people can participate in its benefits—requires an environment where new entrants with drive and good ideas, regardless of their gender or ethnic origin, can get started in business and where good firms can invest and grow, generating more jobs.”

The below chart, published in Bloomberg BusinessWeek, shows the top and bottom countries with regards to starting a business as ranked in the report. 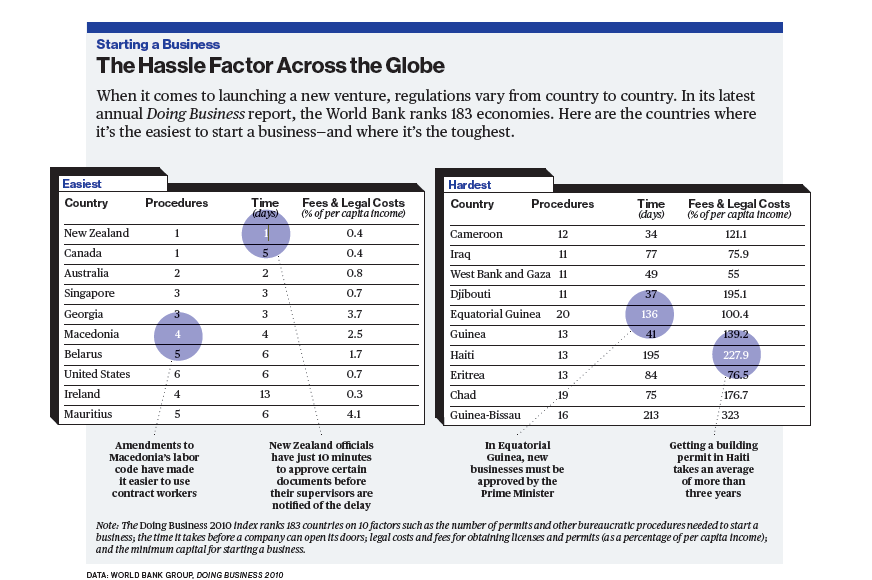 This year’s report examines two new areas: “the ease of obtaining an electricity connection and the level of adoption in national legislation of aspects of the International Labour Organization’s (ILO) core labor standards on child labor.” The authors note, however, that these findings were not included in the rankings. I’m sure that these two new areas will eventually be included in the rankings. As I’ve continually noted over the years, access to electrical power is essential for any economy to grow. It is the lifeblood of any business since it helps provide the connectivity they need to suppliers and customers. Labor standards are also important since their adoption can help stave off some of the violence normally associated with labor unrest as economies move up the ladder of prosperity and workers become more skilled.

The report’s authors also note that “the past year was a tough one for doing business. Firms around the world had to cope with the effects of a financial crisis that started in rich economies but led to a global economic downturn.” Although where an economy ranks on the Doing Business Index is important, rank doesn’t tell the entire story. The report’s authors also look at trends, i.e., which countries are improving and which countries are getting worse. According to their analysis, Rwanda was the top-reforming country last year. The top ten reformers are found in the chart below.

Clearly the list reflects only the business climate. Almost every country on that list has political challenges. The one thing it does show is that reforms are a lot easier to implement in countries where democracy has yet to blossom fully. There are, of course, a number of reasons that countries should want to reform and improve their business environment. I’ve noted on numerous occasions that sustainable development requires the help of foreign direct investment. Attracting FDI is probably the main reason for implementing reforms. Another good reason is to reduce the informal economy. The report notes:

“Regulatory burdens can push firms—and employment—into the informal sector. There, firms are not registered, do not pay taxes and have limited access to formal credit and institutions — and workers do not benefit from the protections that the law provides. The global crisis is expected to further increase informal activity. Almost two-thirds of the world’s workers are already estimated to be employed in the informal sector. Most are in low- and lower-middle-income economies. And a disproportionate share are from already vulnerable groups, such as youth and women.”

In past posts referencing Doing Business reports, I’ve noted that the visibility the report garners has probably done as much to improve the business environment around the world as any program the World Bank has ever supported. For many states, reform efforts have been a source of pride. The below chart demonstrates that a significant number of reforms have been implemented since the World Bank began publishing the report. 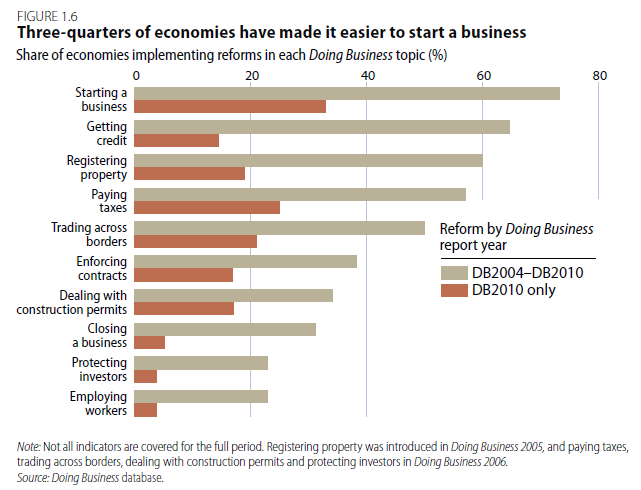 The authors of the report now feel they have enough historical data that they can start making some generalizations. They write:

“As Doing Business has tracked regulatory reforms over the past 6 years, some patterns have started to emerge. Regulatory reform tends to pick up when pressure rises. One reason can be increasing competition as economies join a common market or trade agreement, such as the European Union or the U.S.–Central American Free Trade Agreement. Financial crisis and economic downturn are another strong motivation for reform. So is the need to rebuild an economy following conflict, as in Liberia, Rwanda and Sierra Leone. Whatever the motivation, governments that succeed in sustaining reform programs, as measured by Doing Business, tend to have common features.”

The first common characteristic shared by reformers is a vision that permits long-term planning. The report explains:

“To begin with, they follow a longer-term agenda aimed at increasing the competitiveness of their firms and economy. Colombia, Egypt, Malaysia and Rwanda are all examples of economies incorporating business regulation reforms into a broader competitiveness agenda. Such reformers continually push forward and stay proactive. Singapore and Hong Kong (China) rank among the top economies on the ease of doing business and are also some of the most consistent reformers. This year Singapore once again tops the rankings on the ease of doing business—for the fourth year in a row. And in the past year it continued with reforms, implementing online and computer-based services to make it easier to start a business, deal with construction permits and transfer property. But while successful reformers follow a clear direction in their policy agenda, they do not hesitate to respond to new economic realities. Mauritius, the top-ranked economy in Sub-Saharan Africa, just announced a new insolvency act ‘to maintain the viability of the commercial system in the country.’

The second characteristic shared by successful reformers is that they are comprehensive in their approach. They take a broad view of their economy rather than myopically focusing on selective sectors. The authors continue:

“Successful Doing Business reformers are comprehensive. Over the past 5 years Colombia, Egypt, Georgia, FYR Macedonia, Mauritius and Rwanda each implemented at least 19 reforms, covering 8 or more of the 10 areas measured by Doing Business. This broad approach increases the chances of success and impact. Recent research suggests that reforms in different areas tend to be complementary. One study finds that after reforms reducing barriers to entry in India, states with more flexible employment regulations saw a 25% larger decrease in informal firms. Other studies show that when economies open up their product markets to international competition, the benefits are greater if the cost of entry is lower. Lower barriers to entry allow firms to move more easily toward industries that most benefit from trade openness.”

The next attribute shared by successful reformers is broad involvement. All stakeholders need to “buy in” to reforms if they are going to work. The authors continue:

“Consistent reformers are inclusive. They involve all relevant public agencies and private sector representatives and institutionalize reform at the highest level. Colombia and Rwanda have formed regulatory reform committees reporting directly to the president or prime minister. More than 20 other economies, including Burkina Faso, India, Liberia, FYR Macedonia, the Syrian Arab Republic and Vietnam, have formed committees at the ministerial level. Reforms in Egypt involved 32 government agencies supported by the parliament.”

The final attribute of successful reformers is consistency. Companies are reluctant to do business in areas where their businesses could be affected by individual whims or policy volatility. According to the Report’s authors, this consistency results from focus:

“Successful reformers stay focused thanks to a long-term vision supported by specific goals. Malaysia aims to be a fully developed economy by 2020. Colombian President Alvaro Uribe envisions a new Colombia in which, rather than 60% of the population living in poverty, most would be counted as middle class. Rwanda aims to become a technology and trade hub in the region. The Kyrgyz Republic wants to become the center for regional regulatory excellence in Central Asia, Azerbaijan the gateway to the region. Setting long-term goals and keeping a steady course of reform might help economies recover from shocks, including the current global financial and economic crisis. In the words of Egyptian Minister of Investment Mahmoud Mohieldin, It is not just a crisis of the economy. It is a crisis of economic thinking. It is a crisis that is confusing many reformers … [but] whatever crisis you are facing, you need to make life easier for those who are endeavoring and working hard to create opportunities for jobs, and this is the least that we can be doing.”

There is a lot of great information contained in the full report beyond the country rankings. If you are interested in doing business in another country, you would be wise to download the report and read it through.