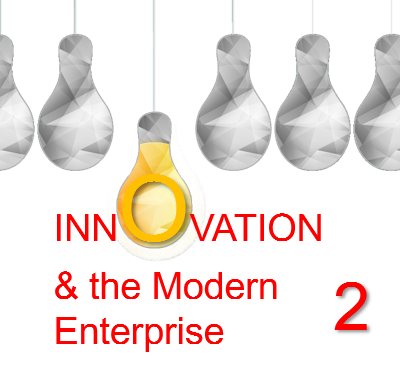 Creativity and the Modern Enterprise, Part 2

Can anybody be creative? Most experts believe they can. Journalist Jess Shankleman (@Jess_Shankleman) writes, “Neuroscientists view creativity as a cognitive skill, like math or memory, that can be learned, measured, and strengthened.”[1] The GCFLearnFree.org subscribes to this view as demonstrated in the following video.

In Part 1 of this article, I discussed why creativity (i.e., the generation of ideas) is the first essential step in the innovation process. I also discussed the importance of separating out good ideas from mediocre ideas. In this concluding part of the article, I want to discuss suggestions from expert that business leaders can use to encourage their employees to be more creative. Creative ideas will not only help the business, helping people become more creative will enrich their lives as well.

Tools Creativity Companies Should Have in Their Kit

Get a new perspective: Balder Onarheim (@baldero), co-founder of the Copenhagen Institute of NeuroCreativity, says, “It’s a mistake to think some people are creative and some aren’t.”[2] Getting a new perspective sometimes utilizes a technique known as Oblique Strategies. Onarheim explains, “Neuroscientists view creativity as a cognitive skill, like math or memory, that can be learned, measured, and strengthened. In a prehistoric context, the caveman who found a way to hold off or distract a lion rather than simply fleeing with the rest of the crowd was more likely to live to see another day. You outsmart the others, whether that’s making a tool to scare off the lion or whatever. The one who is thinking differently from the rest has a better chance of survival. Similarly, creativity can today give people a competitive edge in any profession, from firefighting to oil trading. The challenge is knowing when we need to be creative and how to do it. Creativity requires a lot of energy, and the brain is designed to conserve energy, especially in stressful situations, so if it can reuse an old pattern, it will. For most people, it’s actually about knowing when to help push your brain out of the normal way of dealing with things. When seeking inspiration, many people look for ideas around issues similar to the one they’re stuck on. The genius of Oblique Strategies is that it introduces an element of randomness that breaks that mold. It’s the same reason people often have their best ideas in the shower or on a walk through the woods rather than sitting at a desk.”

Welcome the unexpected. William Daniel “Danny” Hillis (@dannyhillis), an American inventor, engineer, mathematician, entrepreneur, and author, once stated, “Everyone knows that innovation is risky, and it’s rare that you arrive at your expected destination. But maybe that destination isn’t so important. Maybe what you should be paying attention to are the little detours you take along the way: It’s down those back roads and byways that the real payoff usually is found. Maybe, in fact, the biggest risk in innovation lies in sticking too closely to your plans.”[3] History is filled with serendipitous discoveries. Penicillin was discovered during a search for an antiseptic formula based on nasal mucous. Teflon was created by chemists trying to invent an alternative to Freon. Rayon and nylon were fashioned by mistake. A close companion of serendipity is the concept of flexible ideas. Gunpowder was formulated to prolong life. The phonograph was invented to record phone messages. The mechanical clock was invented to regulate monastic prayers. Viagra was invented to treat angina. The point here is that curiosity and imagination often team up to create unanticipated new knowledge and opportunities.

Stretch your mind. Shankleman reports, “Onarheim frequently tries to think of a series of words with no connection to each other — what you might call ‘word disassociation’ rather than word association.” She also notes that musician Brian Eno developed a series of cards containing random thoughts, memes, and instructions “intended to be drawn at random when an artist’s creativity was flagging.” The two ideas can be married by writing words on cards and randomly matching them up to stir new thoughts. Another way to stretch your mind is to discuss problems with people from different disciplines. In Frans Johansson’s interesting book The Medici Effect: Breakthrough Insights at the Intersection of Ideas, Concepts, and Cultures, he focuses on the value of creating a space in which people from diverse fields of expertise can get together to exchange ideas.

Avoid groupthink. Adam Grant (@AdamMGrant), a professor of management and of psychology at the Wharton School, University of Pennsylvania, insists, “Groupthink is probably the biggest problem I hear leaders complain about. It’s the barrier to innovation. It leads to all kinds of bad decisions. It gets in the way of change. Every leader I work with wants to know, ‘How do I get diversity of thought?’ What most of them do is they assign a devil’s advocate. They say, ‘Look, if we have a majority opinion, we need to get somebody who’s going to argue for the opposite.’ Unfortunately, most of the time, it doesn’t work. Charlan Nemeth at Berkeley, University of California, has spent a few decades studying this. What she finds is that people aren’t actually persuaded by devil’s advocates most of the time. One, they don’t argue forcefully enough because they don’t really believe the position: it’s ‘All right, I’m going to play a role here. I’ve checked the box, and now I can go right back to the majority view.’ And then, second, even if they do argue with passion and conviction, their audiences tend not to believe them because they know, ‘Yeah, that guy’s just playing a role.’ So how do you get dissenting opinions? The answer from Nemeth is that we need to do a much better job not assigning devil’s advocates but unearthing them. Find somebody who genuinely holds a different opinion and invite them into the conversation.”[4] Leveraging the Medici Effect is another way to avoid groupthink.

If something doesn’t work, still celebrate that your team took a shot. Business strategist Scott Duffy (@scottduffymedia) asserts, “People who are the most successful and creative are the ones who take risks. They try, they fail, and they learn from their mistakes. Create a culture where taking a shot at something new is celebrated, as long as something is learned.”[5] I once read an article that included the story of Matt Buckley, an employee at Southwest Airlines. As I recall, Buckley recommended that the company expand into the maritime transportation industry. His recommendation was followed and the company lost millions of dollars. Instead of firing Buckley, the company praised him for his initiative and eventually promoted him to vice president of cargo and charters. I believe the article went on to state that any out of the box idea presented by a Southwest employee was, for a while (and may still be), called a “Matt Buckley.” IBM legend Thomas J. Watson once faced a situation in which an employee’s mistake cost the company ten million dollars. When the man was summoned into Watson’s office, he was asked if he knew why he was there. The man said that he expected that he was going to get fired. “Fire you?” Watson exclaimed. “I spent $10 million educating you. I just want to be sure you learned the right lessons.” That’s encouraging risk-taking!

Take a break. It’s difficult to be creative when you are stressed. To relieve your stress and get the creative juices flowing, “Eno recommends the French card game Dixit, which asks players to find enigmatic phrases or sounds to describe dreamlike pictures.” Journalist Gretchen Reynolds (@GretchenReynold) reports research supports your taking a walk or performing other exercise. “If you often exercise, there’s a good chance you also tend to be more creative, according to an interesting new study of the links between physical activity and imagination. It finds that active people come up with more and better ideas during tests of their inventiveness than people who are relatively sedentary, and suggests that if we wish to be more innovative, we might also want to be movers and shakers.”[6] Duffy believes taking a break, even if you are not suffering from creativity block, is a good idea. “Do something outside the office at least once a quarter,” he suggests. “The activity doesn’t have to be expensive or extravagant. You might schedule a happy hour, miniature golf, or go-cart racing. Whatever it is, getting people to engage in a new setting can build relationships and inspire creativity. By getting your employees out of their comfort zones and getting them to interact with one another can open their eyes to new possibilities.”

Those are just a few ideas about how to stir employees’ creative juices. Reynolds goes on to note that encouraging employees to take a break not only helps them to be more creative it helps them to be happier. “Some past research,” she notes, “speculated that good moods might be the intermediary linking activity and creativity. According to that idea, moving makes people happier, and their good cheer in turn makes them more creative.” Bobby McFerrin may have hit on something when he sang, “Don’t worry, be happy. In every life we have some trouble; but when you worry you make it double.” Get out there and get creative — and be happy.