Home » Business » Corruption Remains a Problem Around the Globe

Corruption Remains a Problem Around the Globe

Over the past couple of years, I’ve written several posts about the deleterious effects that corruption has on development efforts (for example, see my posts entitled Development and Corruption in Iraq, Battle to Stop Corruption Wanes, and The Ups and Downs of the War Against Corruption). An article in The Economist underscores that “saying ‘no’ to corruption makes commercial as well as ethical sense” [“The corruption eruption,” 29 April 2010]. The article reports:

“It is years since Moisés Naím coined the memorable phrase ‘corruption eruption’. But there is no sign of the eruption dying down. Indeed, there is so much molten lava and sulphurous ash around that some of the world’s biggest companies have been covered in it. Siemens and Daimler have recently been forced to pay gargantuan fines. BHP Billiton, a giant mining company, has admitted that it may have been involved in bribery. America’s Department of Justice is investigating some 150 companies, targeting oil and drugs firms in particular. The ethical case against corruption is too obvious to need spelling out. But many companies still believe that, in this respect at least, there is a regrettable tension between the dictates of ethics and the logic of business. Bribery is the price that you must pay to enter some of the world’s most difficult markets (the ‘when in Rome’ argument). Bribery can also speed up the otherwise glacial pace of bureaucracy (the ‘efficient grease’ hypothesis). And why not? The chances of being caught are small while the rewards for bending the rules can be big and immediate.”

There is an ancient religious parable known as the “Hymn of the Pearl” in which a young man travels from the East (probably from the area now know as Iran) to Egypt to secure a precious pearl. Once in Egypt the young man explains his “when in Egypt” tactics and what happened next: “I clothed myself in their garments, lest they suspect me as one coming from without to take the Pearl. … But through some cause they marked that I was not their countryman, and they ingratiated themselves with me, and mixed me (drink) with their cunning, and gave me to taste of their meat; and I … forgot the Pearl. … Through the heaviness of their nourishment I sank into a deep slumber.” [Hans Jonas, The Gnostic Religion, second edition (Boston: Beacon Press, 1963). When a company engages in corruption, it, too, enters into a deep ethical slumber that can make it forget the pearl of business and that slumber can end up costing it dearly. The article continues:

“But do you really have to behave like a Roman to thrive in Rome? Philip Nichols, of the Wharton School, points out that plenty of Western firms have prospered in emerging markets without getting their hands dirty, including Reebok, Google and Novo Nordisk. IKEA has gone to great lengths to fight corruption in Russia, including threatening to halt its expansion in the country, firing managers who pay bribes and buying generators to get around grasping officials holding up grid connections. What is more, Mr Nichols argues, it is misguided to dismiss entire countries as corrupt. Even the greasiest-palmed places are in fact ambivalent about corruption: they invariably have laws against it and frequently produce politicians who campaign against it. Multinationals should help bolster the rules of the game rather than pandering to the most unscrupulous players.”

“And is ‘grease’ really all that efficient? In a paper published by the World Bank, Daniel Kaufmann and Shang-Jin Wei subjected the ‘efficient grease’ hypothesis to careful scrutiny. They found that companies that pay bribes actually end up spending more time negotiating with bureaucrats. The prospect of a pay-off gives officials an incentive to haggle over regulations. The paper also found that borrowing is more expensive for corrupt companies, probably because of the regulatory flux. The hidden costs of corruption are almost always much higher than companies imagine. Corruption inevitably begets ever more corruption: bribe-takers keep returning to the trough and bribe-givers open themselves up to blackmail. Corruption also exacts a high psychological cost on those who engage in it. Mr Nichols says that corrupt business people habitually compare their habit to having an affair: no sooner have you given in to temptation than you are trapped in a world of secrecy and guilt. On the other hand, the benefits of rectitude can be striking. Texaco, an oil giant now subsumed by Chevron, had such an incorruptible reputation that African border guards were said to wave its jeeps through without engaging in the ritual shakedown. Moreover, the likelihood of being caught is dramatically higher than it was a few years ago. The internet has handed much more power to whistle-blowers. NGOs keep a constant watch on big firms. Every year Transparency International publishes its Corruption Perceptions Index, its Bribe Payers Index and its Global Corruption Barometer.”

I believe that business should be carried out in such a way that one’s company isn’t going to be embarrassed by a headline in the New York Times. If a business person can honestly say that he wouldn’t mind having his actions reported on the front page of a newspaper, he or she is probably acting ethically. If they would not be happy seeing their actions broadcast to the world, they should prepare themselves for a potential “perp” walk.

“The likelihood of prosecution is also growing. The Obama administration has revamped a piece of post-Watergate legislation—the Foreign Corrupt Practices Act (FCPA)—and is using it to pursue corporate malefactors the world over. The Department of Justice is pursuing far more cases than it ever has before: 150 today compared with just eight in 2001. And it is subjecting miscreants to much rougher treatment. Recent legislation has made senior managers personally liable for corruption on their watch. They risk a spell in prison as well as huge fines. The vagueness of the legislation means that the authorities may prosecute for lavish entertainment as well as more blatant bribes. America is no longer a lone ranger. Thirty-eight countries have now signed up to the OECD’s 1997 anti-corruption convention, leading to a spate of cross-border prosecutions. In February Britain’s BAE Systems, a giant arms company, was fined $400m as a result of a joint British and American investigation. Since then a more ferocious Bribery Act has come into force in Britain. On April 1st Daimler was fined $185m as a result of a joint American and German investigation which examined the firm’s behavior in 22 countries.”

“Companies caught between these two mighty forces—the corruption and anti-corruption eruptions—need to start taking the problem seriously. A Transparency International study of 500 prominent firms revealed that the average company only scored 17 out of a possible 50 points on ‘anti-corruption practices’. … Companies need to develop explicit codes of conduct on corruption, train their staff to handle demands for pay-offs and back them up when they refuse them. Clubbing together and campaigning for reform can also help. Businesses played a leading role in Poland’s Clean Hands movement, for example, and a group of upright Panamanian firms have formed an anti-corruption group. This may all sound a bit airy-fairy given that so many companies are struggling just to survive the recession. But there is nothing airy-fairy about the $1.6 billion in fines that Siemens has paid to the American and German governments. And there is nothing airy-fairy about a spell in prison. The phrase ‘doing well by doing good’ is one of the most irritating parts of the CSR mantra. But when it comes to corruption, it might just fit the bill.”

My colleague, Tom Barnett, provides his insight on this article in a post entitled Corruption as a business affair. For a snapshot of graft around the world, Bloomberg BusinessWeek published a great graphic. 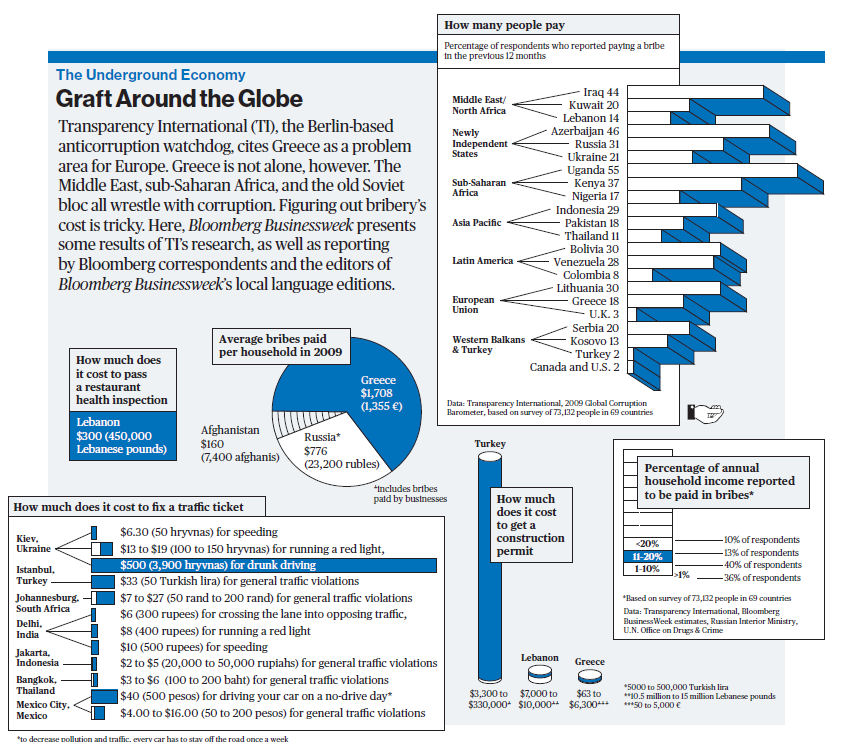 Friedrich Nietzche wrote, “In all institutions from which the cold wind of open criticism is excluded, an innocent corruption begins to grow like a mushroom.” I agree. That is why I have supported more transparency in both government and in business practices. Corruption has a corroding influence that reaches beyond the walls of darkened rooms in which shady deals are transacted. Bess Meyerson, former Miss America and consumer advocate, once said, “The accomplice to the crime of corruption is frequently our own indifference.” Business and government leaders can’t afford to be indifferent to corruption.