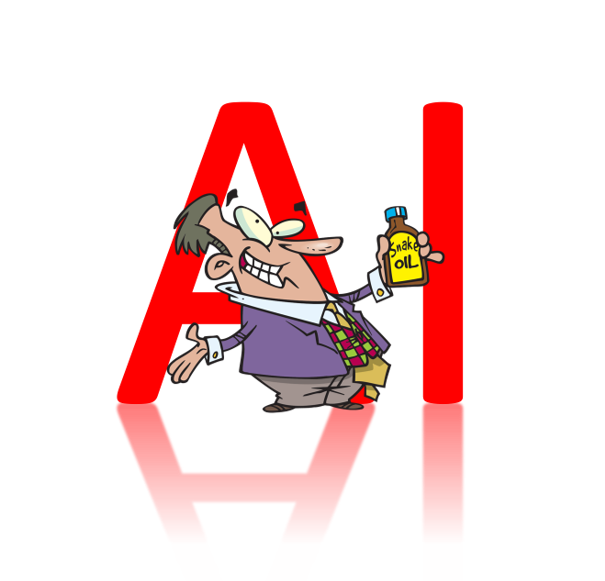 Companies Need AI: Understand What You are Getting

Jonathan Vanian (@JonathanVanian) reports, “Artificial intelligence is so important for business success, executives said in a new survey, that most of them fear their companies will fail without it.”[1] At the same time, Arvind Narayanan (@random_walker), an associate professor at Princeton, asserts, “Most of the products or applications being sold today as artificial intelligence (AI) are little more than ‘snake oil’.”[2] Dev Kundaliya explains, “The term snake oil is, today, a euphemism for misleading marketing. The term is used to describe any useless medical remedy hawked by quacks as a cure-all for a wide-range of ailments. In the 19th century, ‘snake oil’ was commonly sold across the US as a panacea, although most of those products had no medicinal value and didn’t even contain any actual snake oil.”[3] Because AI is deemed so important by corporate executives for the future of their companies, “AI” has become a marketing buzzword for vendors to attract clients. Business executives need to understand artificial intelligence is an umbrella term — and it’s a very large umbrella. Narayanan decries the fact that chatbots, fraud detection, and business process automation systems are often placed under the AI umbrella. He doesn’t believe they belong there. On the other hand, he believes areas in which genuine AI are successfully used include content identification, facial recognition, medical diagnosis from scans, speech-to-text, and deepfakes.

Narayanan doesn’t dismiss the valuable roles things like chatbots, fraud detection, and process automation play in the business world, he is simply arguing for increased semantic precision for the term artificial intelligence. Here’s the problem, most people today equate machine learning with artificial intelligence and the use of machine learning is widespread. As a result, Narayanan is probably fighting a losing battle. Nevertheless, he makes an important point. Business executives need to understand exactly what they are buying when they invest in AI, cognitive computing, or machine learning platforms. Greg Nichols (@gcnichs) writes, “Artificial intelligence is one of the most marketed (hyped, you might say) and ill-defined technology categories being packaged and lobbed at those in the enterprise these days. You might think overexposure would lead to fatigue and a healthy dose of skepticism. Not so, according to original research from IFS.”[4]

Vanian reports a survey conducted by Accenture found, “Seventy-five percent of executives ‘believe they risk going out of business in 5 years if they don’t scale AI.'” That’s a startling fact. Vanian continues, “Athena Reilly, a managing director at Accenture who co-authored the report, said the findings show that there’s a ‘a sense of urgency at the top’ about artificial intelligence. If a business ignores the technology, competitors who have mastered it are more likely to gain a big advantage.” According to Nichols, the IFS study agrees with the Accenture survey. He reports, “Business leaders across a variety of industries are convinced AI will be an essential component of their companies’ success in the near future. In fact, about 90% of respondents reported at least some plans to implement AI in various parts of their business. That’s a telling statistic. Whether motivated by fear of missing out or clear-eyed optimism, business leaders seem sold on AI’s promise.”

Concerning the IFS study, IFS Vice President of AI and RPA Bob De Caux said, “We are seeing many real-world examples where technology is augmenting existing decision-making processes by providing users with more timely, accurate and pertinent information. In today’s disruptive economy, the convergence of technologies such as AI, RPA, and IoT is bolstering a new form of business automation that will provide companies that are brave enough with the tools and services they need to be more competitive and outflank larger competitors.”[5] Narayanan would probably argue much of what De Caux is labeling AI is not AI. Regardless, most executives believe technologies widely placed under the AI umbrella are essential to thrive in the Digital Age.

George Ugras, Managing Director at AV8 Ventures, correctly asserts companies must be able to make a business case for AI implementation if they are going to invest. He explains, “Make sure outcomes are measurable and trackable. Whatever project you are deploying the impact that it is having on the business as a result of AI should be something you can measure and track versus some established baseline.”[6] Accenture’s Reilly agrees. “Successful A.I. projects ‘need to be grounded in a business problem’ with clear goals and metrics, she said. For instance, a company may want to use the technology to be more successful in collecting payments from clients. The company could set a specific goal — improving collections by a specified percent — and then use a particular statistical or A.I. technique to help achieve that goal.” She makes an important point, use the best tool for the job. Not all tasks require AI. If you want to use AI, Ugras writes, “Only focus on problems that can be solved better than using a deterministic or rule based engine.” Ugras indicates he has too often observed people trying to sell AI “as a hammer looking for any type of nail.”

Ugras also insists, “If our aim is to get deployed and used in a real life problem, we need to be able to explain decisions made.” At Enterra Solutions® we address the black box problem using Massive Dynamics™ Representational Learning Machine™ (RLM). The RLM helps determine what type of analysis is best-suited for the data involved in a high-dimensional environment and it accomplishes this in a “glass box” rather than “black box” fashion (i.e., it makes decisions explainable). Glass box operations go a long way toward making AI a trusted business partner.

Corporate executives have good reasons to believe their future depends on successfully implementing cognitive and other cutting-edge technologies. Professor Narayanan breaks down current AI efforts into three categories and he suggests only two of the three categories are worth investing in. The first category he calls “Perception.” Under this category he lists things like facial recognition, medical diagnoses, image search, speech to text, and deepfakes. He asserts there has “genuine, rapid progress” in the area of perception. His second category is Automating Judgment.” Under this category he places things like spam detection, copyright violation, automated essay grading, hate speech detection, and content recommendation. He indicates progress in this area is “imperfect, but improving.” His third category is “Predicting Social Outcomes.” Under this category, he lists predicting recidivism, predicting job success, predictive policing, predicting terrorist risk, and predicting at-risk children. He calls such efforts “fundamentally dubious.” He concludes, “This is of course not even close to an exhaustive list of things that AI is used for (not on this list: all of robotics, game playing, …). The point, however, is to illustrate how limits to accuracy are quantitatively and qualitatively different for different types of tasks.” Taking Ugras’ and Reilly’s advice, and focusing on real business problems, decision makers should be able to separate the real thing from the dubious.